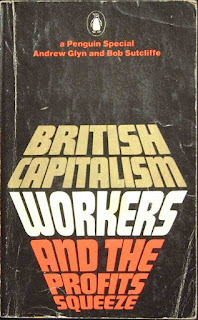 Book Review from the February 1973 issue of the Socialist Standard

The thesis of this book can be stated simply: British capitalism is in crisis because profits have been squeezed between rising wages, on the one hand, and increasing international competition which has prevented compensatory price rises on the other.

The authors present figures to argue that there has been a drastic fall in the rate of profit since 1964 and predict that, sooner or later, this will be reflected in a collapse of share prices on the Stock Exchange too. Increasing international competition they attribute to the end of the post-war boom. "British capitalism", they say, “has entered a crisis which it may not survive”. In short, in their view, the long-expected "big slump” is imminent.

Maybe. That there has been a fall in the rate of profit in recent years is undeniable; so is the fact that this has been the cause of a slow rate of capital accumulation in Britain. And, that, therefore, all recent governments, Labour as well as Conservative, have been forced to attack working-class living standards in a bid to increase profits, the lifeblood of capitalism.

But is this fall in profits the beginning of a "big slump” or just the downturn of another normal capitalist business cycle which will eventually be followed by a recovery? Past experience (including our own) of predicting slumps advises caution. Capitalism has proved to be more resilient than we might like.

Two points of economic criticism. First, Glyn and Sutcliffe betray no knowledge of the basic cause of inflation and indeed appear to think that it is the result of capitalist firms putting up prices. But, as we have repeatedly shown in the Socialist Standard, inflation has been caused by the currency policies of successive post-war governments. Partly this has been due to an ignorance of monetary economics, but partly also it has been political: inflation undermines working class living standards without provoking the head-on clash with the unions a direct reduction of wages would. Recent trade union activity has largely been a response to inflation and has only kept real take-home pay rising slightly faster that prices but less than productivity.

This brings us to our second criticism. Glyn and Sutcliffe grossly over-exaggerate the effectiveness of trade unions in raising wages. They attribute to the unions a major responsibility for the present crisis. For, according to them, by pushing up wages in a period of intense international competition the unions have squeezed profits. In fact there is no evidence that rising wages do squeeze profits. The working class has certainly resisted capitalist attempts to reduce their living standards more successfully than the capitalists would have liked, but this is not quite the same thing. As the authors themselves point out, in previous crises the workers have become more militant essentially only in defence of their living standards.

But, for political reasons, they want to believe the present crisis to be different. They believe that if the workers keep up their present pressure for higher wages (and if they are not “betrayed” by their trade union leaders as in the past) then capitalism, at least in Britain, can be overthrown.

Quite apart from the fact that what, in their minds, is to replace capitalism here is merely a national state capitalism (which, surely, would be subject to the same pressures from international competition to restrict working-class consumption in the interests of capital accumulation?), this is nonsense. The defensive trade union struggle cannot lead to the overthrow of capitalism precisely because in the end the capitalist class and their government have in their hands all the wealth and power they need to defeat the unions. To overthrow capitalism a conscious political movement for Socialism must arise (and not just in one country either). Otherwise, and until it does, capitalism will indeed "muddle on for ever”.