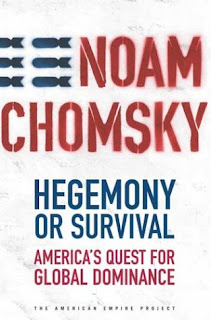 Book Review from the May 2004 issue of the Socialist Standard
Hegemony or Survival: America's Quest for Global Dominance. By Noam Chomsky.

This is the latest in a long line of books by Chomsky on US 'foreign' policy. Like the others, it presents a devastating critique of the American ruling class's support for dictatorships and readiness to use military might to get their way.

One of the key points of this text is the extent of the USA's current ambitions. With effectively no rivals, the US can aspire to 'permanent global hegemony by reliance on force where necessary'. This strategy involves 'preventive war': invading (or just threatening to invade) countries which step out of line or present any kind of challenge to US power. The US has a virtual monopoly of large-scale violence, can almost do what it likes in the global arena, and intends to keep things this way.

While the exact degree of US aims is new, it is of course just an extension of previous policies. In the early part of the 20th century, British companies were driven out of Venezuela, leaving US firms in charge of its vast oil industry (as they still are today). While other countries were weakened in the Second World War, the US emerged as economically dominant and strategically secure. It moved to gain effective dominance over the Middle East, which had the extra advantage of giving it control over Japan's energy supplies. In 1958, independent Arab nationalism was fought with help from Israel and Turkey, while the same year mass slaughter in Indonesia 'eliminated the mass-based political party of the poor and opened the doors wide to Western investors'. This last quote unfortunately reveals one of Chomsky's shortcomings: his uncritical enthusiasm for reformist anti-Western movements which in reality stand for a more nationalist version of capitalism. (This kind of logic has reached its nadir in his endorsement of John Kerry for US president, as a lesser evil than Bush!)

In more recent years, the US has consistently supported tyrannical dictators and then claimed credit for their overthrow. At the same time it has done its best to undermine any government that did not bow down before it, as in Cuba and Nicaragua, leading to the conclusion that the US is 'a leading terrorist state'. Domestically, the tactic has been for whichever faction is in power to maintain it by instilling fear in the population - 9/11 of course made this much easier. At the same time, the government has cut back on welfare spending, from schools to social security. Chomsky's summary of all this is:

"Maintaining a hold on political power and enhancing US control of the world's primary energy sources are major steps toward the twin goals that have been declared with considerable clarity: to institutionalize a radical restructuring of domestic society that will roll back the progressive reforms of a century, and to establish an imperial grand strategy of world domination."

Note that this passage again shows Chomsky's support for allegedly-progressive reforms which in fact do not challenge the power of the capitalist class or modify the subordinate status of workers.

The ambitions of the US rulers are no longer confined to terra firma, as they wish to extend their control to space. This is not an arms race exactly, as the US is the only real competitor in the militarisation of space. Ballistic missile defence (BMD) is yet another tool for global dominance, designed to make the US practically impregnable yet able to strike almost anywhere. In some variants, BMD will be so all-embracing that the US will effectively 'own' space (the jargon is 'full-spectrum dominance'). US hegemony is apparently seen as more important than mere human survival (hence the book's title).

Chomsky's persistently ironic style will not be to everyone's taste, but his book does give a thorough picture of the leading superpower's plans for all our futures.