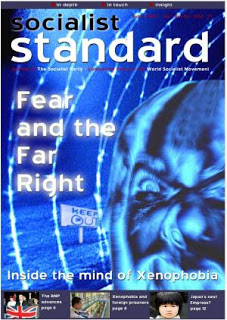 "The unacceptable face of capitalism" has become a standard term for excusing some excess of capitalist enterprise as if capitalism could ever have an acceptable face. At the annual jamboree of the Institute of Directors at the end of April, Todd Stitzer, chief executive of the Cadbury Schweppes group, whined that "business bashing has become everyone's favourite sport".

"He said recent scandals and disasters, from 'Enron to Arthur Andersen to Exxon Valdez and Bhopal', were not typical. 'These episodes did expose the unacceptable face of capitalism . . . But the business world is not populated by malignant people determined to harm others and exploit the world for base profit'" (Daily Telegraph, 27 April).

He was also reported as saying that businesses had to try to convince the public that companies were "capitalists with ideals" (London Times, 27 April).

Of course Stitzer and other heads of capitalist corporations are not (or at least the vast majority of them aren't) "malignant people determined to harm others and exploit the world" but it remains true that their "ideal" is, and has to be, maximizing profits, base or otherwise.

The personal views and motivations of business leaders are not relevant to the way the capitalist system works. Business leaders are cogs in the economic mechanism of the accumulation of capital out of profits derived from the surplus value produced by the class of wage and salary workers. They have to pursue a policy of maximising profits, even if this might "harm others and exploit the world", as this is what has to be done for their particular company - in fact, for any company - to stay in the competitive struggle for profits. If they didn't do it, somebody else would be found who would.

It is true that some of them seem to have completely internalised putting the making of profits before everything else and delight in applying this ruthlessly, and that this has earned business its deserved reputation for having an interest only in the bottom line. Others, such as Stitzer, may have some qualms about what they are doing, but do it all the same.

Then there was the case of the Norfolk and Norwich Hospital Trust which was tricked by a consortium which had contracted to build a new hospital for them. The "re-financing" deal was exposed by the House of Commons Public Accounts Committee, whose (Tory) chairman, Edward Leigh, called it . . . "the unacceptable face of capitalism".

What happened was that, after the hospital had been built, the consortium Octagon was able to obtain better financial conditions for the money it had borrowed to build the hospital. An extra £116 million was raised which, according to the (Tory) MP for Norwich South, Richard Bacon, was used "not to build more wards or a new cardiac unit. The sole purpose of this extra borrowing was to speed up the rate of return to investors" (London Times, 3 May).

Octagon had done nothing illegal. They had merely used their financial expertise to get a favourable deal for their shareholders at the expense of a hospital trust inexperienced in such matters. It happens all the time. In fact, such wheeling and dealing is virtually all that goes on in the City of London where not an ounce of wealth is created, but where financial capitalists try to trick each other - and any inexperienced suckers they come across - out of what has been produced by the working class.
Posted by Imposs1904 at 5:50 AM No comments: