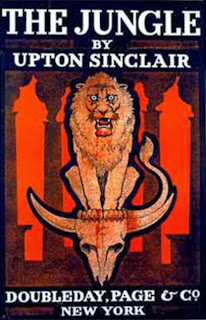 The centenary of an anti-capitalist classic.

A hundred years ago, in the summer of 1906, the American author Upton Sinclair completed a novel called The Jungle. The work, a 'muckraking' account of labour and unsanitary conditions in the Chicago stockyards, quickly established itself as a classic denunciation of industrial capitalism and one of the most revolutionary novels of the age.

Originally commissioned for serialisation by the radical American journal Appeal to Reason, The Jungle catapulted Sinclair to international prominence and placed him at centre of a radical social movement that sought to resist the acceleration of monopoly capitalism during the 'Progressive Era' in early twentieth century America. The dominant theme of this movement was the attempt, through works of literature, to arouse resistance to the escalating dominance of a political and economic elite whose control over the media stifled public awareness, debate, and activism.

The Jungle was written in a turbulent age. When Theodore Roosevelt became President in 1901, America was a country deeply divided by the extremes of wealth and poverty. The period since the Civil War had been overshadowed by the rapid development of capitalism and an ebb and flow in the workers' bitter struggle to organise the defence of working conditions against the onslaught of capital. After the mass strike of 1877, employers' repression of labour was aided by the courts and the enactment of anti-union conspiracy laws as well as the revival of state militias (later to be renamed the National Guard) as the instrument to break strikes. Open class warfare intensified after the 1886 Haymarket incident, when police attacked a Chicago demonstration demanding the 8-hour working day. In the resulting chaos a bomb was thrown, police and protesters were killed, and the leaders of the radical groups involved arrested, charged and seven of their number subsequently executed for murder. The newspapers whipped up public hysteria against the labour movement and the violent suppression of strikes by armed troops and private armies became widespread across America. Blacklisting, strike-breaking, the murder of trade unionists and police harassment were orchestrated by the business and political elite to prevent the formation of a mass working class organisation. The offices of trade unions and radical groups were often raided and ransacked, leaders arrested, printing presses destroyed and armed vigilante groups were organised by business to break-up meetings.

The Jungle captured the brutality of the era and not unexpectedly Sinclair had difficulty finding a publisher for his devastating novel. An employee at the publishers Macmillan wrote, "I advise without hesitation and unreservedly against the publication of this book which is gloom and horror unrelieved. One feels that what is at the bottom of his fierceness is not nearly so much desire to help the poor as hatred of the rich." Undaunted, Sinclair self-published and the novel immediately caused uproar, but not in the way he had hoped.

Sinclair's intention in writing the novel had been to draw attention to the appalling conditions and squalor of wage-labourers under capitalism by unfolding the tragedy of his central character, Jurgis Rudkus, a Lithuanian immigrant working in the meat packing houses of Packingtown, a suburb of Chicago. But his objective was lost on the public, overshadowed by his descriptions of the unsanitary conditions and inadequate regulation in the meat processing plants. Creating a fear that public indignation would lead to a collapse in confidence and hence in the profits of the Beef Trusts, the nauseating detail exposed in The Jungle prompted instead the intervention of President Roosevelt and the subsequent passage of the Meat Inspection Act of 1906. Sinclair would later lament, "I aimed for their hearts, and hit their stomachs."

Widely read
Although failing to accomplish his immediate goal, Sinclair remained a highly acclaimed and widely read author, whose other works included King Coal (1917) and The Profits of Religion (1918). But in 1919 he completed The Brass Check, which he considered "the most important and most dangerous book I have ever written" (8th edition 1920, p. 429.). The work was a devastating critique of the contradiction of capitalist newspaper production for profit and a so-called "free press." It accused American journalism of being a class institution serving the rich in which "Politics, Journalism, and Big Business work hand in hand for the hoodwinking of the public and the plundering of labour." (The Brass Check, p.153). In 1942 he wrote Dragon's Teeth, a novel on the rise of Nazism that won him the 1945 Pulitzer Prize. A prodigious writer, he completed, ninety-two books and twenty-nine pamphlets attacking all aspects of social injustice until his death in 1968 at the age of 90.

But for all Sinclair's criticism of the capitalist economic system, he naively clung to the belief that capitalism could be reformed and made to organise in the interests of the working class. He held a deep 'moralistic' view that capitalism could be tamed by social justice and was strongly influenced by the 'reformism' propagated by the Socialist Party of America (established in 1901) which he had joined in 1902. The Socialist Party of America regarded its immediate task as building a mass party to ameliorate the excesses of capitalism and consequently attracted members with a wide variety of reformist opinions.

Like all parties of capitalism that have revolutionary pretensions, the Socialist Party of America was never able to offer a unified response to a number of important questions and in the course of the next 40 years would be torn apart. In the early years the membership held conflicting views on trade unionism, (in particular its relationship with the American Federation of Labour and the IWW) entry into the War, the social reforms of the 'Progressive Era' under Woodrow Wilson's administration and the 1917 Russian Revolution.

In the 1930s the Party would split over its response to Stalinism and the rise of Fascism in Europe. But it was the government's legislation to shore up American capitalism under Roosevelt's New Deal, that finally sapped the Party's remaining support and by 1937 the Socialist Party of America was a spent force. The confusion sown by Party propaganda caused many workers to regard the legislation of the New Deal as the embodiment of the "socialistic" principles that seemed to overlap with the Party's own "immediate demands" for social reform.

Sinclair too must take a share of the responsibility for misguiding the American working class. When America entered the First World War he wrote an article in the radical journal The Masses, that argued that America should enter the war to defeat anti-democratic German militarism and, together with others including Charles Edward Russell and A. M. Simons, resigned his Party membership in protest against the Party's anti-war position. He wrote, "If Germany be allowed to win this war - then we in America shall have to drop every other activity and devote the next twenty or thirty years to preparing for a last-ditch defence of the democratic principle."

Woodrow Wilson's decision to enter the war and its aftermath effectively crushed the American radical labour movement. The Espionage Act of 1917 legitimised government repression by banning radical journals, imposing crippling fines and exposing labour leaders to beatings and arrests. Eugene Debs, once leader of the Socialist Party of America, was sentenced to 10 years imprisonment after making his famous anti-war speech in Canton, Ohio in 1918. In 1927 Sinclair wrote an article for The Nation in which he recanted his view and conceded that his earlier stance on the First World War had been incorrect.

Ran for Governor
In the 1920s Sinclair, a firm supporter of Prohibition, helped to establish the Californian chapter of the American Civil Liberties Union and after rejoining the Socialist Party of America he became their unsuccessful candidate for governor of California in 1926. In 1934 he again stood for governor but this time he abandoned his own party and entered the Democratic Party Primary, winning on a platform known as EPIC (End Poverty in California). In his election proclamation Sinclair maintained that capitalism had gone into permanent crisis and proposed the utopian establishment of a co-operative system for Americas ten million unemployed, "producing everything which they themselves consume and exchanging those goods among themselves by a method of barter, using warehouse receipts or labour certificates." (The Literary Digest, October 13, 1934).

Although he lost the election, Sinclair received considerable support, polling over 879,000 votes (37 percent) but split both the Democratic Party and the Socialist Party of America. Many of his colleagues were appalled by his action, and Sinclair's son David accused him of "insane opportunism," to which Sinclair mildly replied that he was just trying to "educate" the public. After his defeat Sinclair largely abandoned EPIC and returned to his writing.

Sinclair, like the political party he supported, was riddled with contradictions. A scathing critic of capitalism he never once demanded its abolition, preferring instead to compromise with capitalism and pursue abstract notions of 'social justice'. He claimed to be a socialist and yet for much of his life was a member of a political party that would only have administered the capitalist system. He supported America's entry into the war - and the murder of American workers - while acknowledging that the war had nothing to do with the American working class. He was prepared to make alliances with the capitalist organisations including the Democratic Party despite believing that, in the American two party system, elections were when people "go to the polls and cast their ballots for either one of the candidates of their exploiters." (The Brass Check, p.222.) He claimed to be a friend of the working class but would occasionally display racist and nationalistic tendencies in his works.

Sinclair displayed immense talent when he wrote The Jungle. The novel brought him fame and position of influence but his naivety and muddled thinking in the political sphere did little to advance the cause of workers in America.