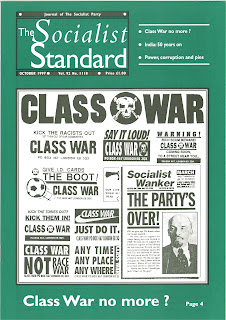 
One of the more delicious frissons I derived from the recent death of Princess Diana was the wicked thought of what Class War magazine would have made out of it. They would have had a field day with the idiotic business, and shocked a great number of the grieving public with an extra-special dose of their puerile sick-bag humour.


But the demise of this less-than-august periodical means we will now have to make up our own sick Diana jokes, and we are the poorer for it. Of all the groups on the 'Left', Class War was the most consistently outrageous and self-parodying. Any revolutionary after our own heart could find much to like about Class War, even if some of their statements could bleach the roots of your hair. Tearaways, hooligans perhaps, juvenile and even infantile at times, the Class War Federation had an energy and a freshness about it which you don't often see in print, a willingness to say the unsayable, to alienate just about everyone, to flout almost every principle of taste and good manners in their unrelenting efforts to shock people into political awareness.


But now they've hauled down their pirates' flag. Class War is Dead, they proclaim. Long live the class war! They have decided to pack it in after 15 years, and do something else. And they are asking revolutionaries everywhere to discuss with them what that something else ought to be. In an Open Letter to the Revolutionary Movement' contained in their final issue, Class War, in a fit of honesty certainly alien to the Left, offer to exchange dirty washing with all-comers in an attempt to find the way forward. There follows a sad tale of internal division and internecine squabbling which will sound familiar to many groups. The gradual conversion of the Federation from free individuals to stagnating monolith is an object lesson in how not to run an organisation, as is their frank admission of the 'macho' female-excluding nature of their political ethos. That they are sincere cannot be doubted. Nor are they one whit diminished by these admissions, but in fact appear more dignified upon their retirement than ever during their career.


Class War, it has to be said, succeeded brilliantly in appealing to a small section of the radical 'market' – those who wanted action, but not the stale formulaic sloganeering of the Left. They had an effect and an influence out of all proportion to their size, making headlines and TV appearances again and again. But for every one person (young white male, as they admitted) who was attracted, fifty were put off. Mainly it was the violence. Pin-up pictures of dead coppers might make good satire, but confirmed most people's worst prejudices about the real nature of anarchists and of revolution. And it narrowed the already small band of their potential sympathisers to the point where Class War became more thuggery than thinking. And when the thinking stopped, the Federation fell apart.


One gets no satisfaction from saying this, but Class War got it wrong from the start. They wanted a democratic moneyless society, without leaders or classes, and without State control. Furthermore they detested the elitist and authoritarian demagogues of the Left every bit as much as we do. But they made, in my view, one crucial error in their class analysis. Instead of a two-class society – owners and workers, they had three. The middle-class to them was the 'controller' section of society (around 20%) which actively collaborated with the top 5% , and also acted as a buffer zone between the owners and the smelly 'working class' (the bottom 75%). This view therefore involved a class struggle not against a tiny minority, but against a very large minority which, though some might be expected to embrace revolution, had its role as collaborator and class traitor already marked out for it.
"We were inspired by the principles of anarchism to raise the flag of direct class conflict because we know that it's the only way our class can win its freedom. To do this we have to push the middle class out of the way".


Hence the perceived necessity, indeed inevitability, of violence. Hence the dropping of paving stones off motorway bridges onto 'posh cars' . Hence the whole tone and thrust of the magazine. Revolution to Class War was essentially a bloody affair, with at least one quarter of the population condemned to the wrong side of a civil war:
"We are in favour of mass working class violence, out in the open."


And this snobbish dismissal of the 'middle-class' in turn condemned Class War, for in purposefully insulting the educated, the Guardian readers, the trendy-lefties, the road-protesters, the vegetarians and the tree-climbers, they managed to alienate the 'joiners' and the 'do-ers'. Despite a circulation of up to 15,000, they could never persuade any of their 'real working class' readers to get involved. But they were not interested in getting involved, and they bought Class War because it amused them, like Viz or Private Eye, or because it flirted with some secret desire to destroy and vandalise, but not because they took it seriously. And revolutionaries need to be taken seriously if revolution is ever going to be possible.


Most jokes have a butt, a target to hit in order to get the laugh. It might be women, or men, or the Irish, or blacks, or politicians, but the victim must be there for the joke to work. Interestingly, most left-wing politics also has to have a butt, a human target, a victim, without which the argument doesn't work. Class War relied very heavily on having a palpable 'enemy', against whom one could vent one's spleen and exact one's revenge. But the trouble with this is, whom do you blame for the way a social system works? Our leaders? Or ourselves for following them? The rich? Or the poor for accepting their poverty? History doesn't hold individuals responsible. Capitalism is the real enemy, not its come-and-go managers, nor its police, nor its teachers. If scapegoats there must be, we are all deserving. The creation of the human 'enemy' in revolutionary politics is the point of departure from the Socialist Party's case for change, and the foundation and wellspring of all appeals to violence. In short, any solution which necessitates violence against individuals is probably wrong, not because of some pacifist moral imperative, but because it doesn't get rid of the problem.


In order for Class War's politics to maintain its appeal, the enemy had to be found, not in the abstract workings of a social system, but in the concrete everyday realities. The owning class was too remote to be tangible, and certainly too remote to be vulnerable. So Class War dragooned the 'middle-class' into the role:
"Those who really run society never put a foot outside their heavily protected worlds. For most of us, our immediate enemy is the middle class: management, social workers, magistrates, teachers and all the other functionaries of capital."


Making a putative middle-class into an enemy is as divisive as anything dreamed up by the owning class, and has more to do with testosterone than tactics. Violence is the steamy sex of left-wing politics, including Class War's. It is adventure, illicit excitement, danger, risk, Marx meets Millwall F.C, hooligans on a mission. It is attractive, but only to some, in the same way as cave diving or bungee jumping. To most people, I suspect, Class War was one of three things: an affront to common decency, or an MI5 plot, or a gang of kids having a lark. In no case was it a thing to get involved with.


What many groups can't stand about the Socialist Party is that we do not advocate violence and therefore cannot offer a practical programme of activity based on it. We are just not exciting enough for them, and thus we are labelled as sterile or 'theoretical' (this being a term of abuse, naturally). But we are not Quakers, and do not rule out the need for violence under all circumstances. We simply argue that it is quite possible, and highly desirable, for a large majority to establish socialism without bloodshed. The more violence is involved, the more likely the revolution is to fail outright, or be blown sideways into a new minority dictatorship.


The Socialist Party has consistently struggled to be heard for almost a century, and continues to struggle. Our venerable age however is no cause to be smug, and we hope that we also can learn something from Class War's commendable openness. We also have not always got it right. We also have had divisions. And we also have known stagnation. Partly it is the political climate. Partly our own shortcomings. Class War tried a tack – that of attack – which didn't work. We could have told them it wouldn't. But we are not sitting pretty either, and are not pointing any fingers. So long as there are revolutionaries out there with the energy to act and the will to think, we want to talk to them.


How to further the revolutionary process? We wish we knew. But we will be watching with interest as ex-Class War members grapple with this new, and for us, very old problem. Maybe they can make a few suggestions.
Paddy Shannon
Posted by Imposs1904 at 7:34 AM 1 comment: