From the Class Warfare blog:

Crikes, the story would have passed me by if Alan’s blog hadn’t alerted me to it. I’m getting slack in my old age. Hot on the heels of two earlier postings (here and here) on world food shortages and how the UN is begging for $500 million to help provide food assistance to the world’s starving millions, comes news that Britain is throwing away half of all the food produced on farms, according to the starkest estimate yet of the amount of edible produce we produce.

“About 20m tons of food is thrown out each year: equivalent to half of the food import needs for the whole of Africa. Some 16m tons of this is wasted in homes, shops, restaurants, hotels and food manufacturing. Much of the rest is thought to be destroyed between the farm field and the shop shelf.”

The cost of the waste is put at a staggetring £20 billion ($40 billion) and eighty times the amount that the UN is asking for to feed the starving largely in Africa and Asia.

Forty-four per-cent of the population of Burundi is starving – that’s bout 4 million people. The food thrown away in the UK last year would meet the equivalent of Burundi's shortages more than 40 times over.

Lord Haskins of Skidby, a former government adviser on rural affairs and chairman of Northern Foods has urged governments to press their citizens to help "avoid disaster by dramatically reducing the ... unacceptable levels of food waste, which are a shameful feature of most modern consumer societies". He called recent controversy over supermarkets' free distribution of plastic bags "a red herring". He argued, "If consumers ate a bit less and wasted a bit less you'd help to solve the problem. If the world was vegetarian then you'd solve the problem completely." One-third of wheat grown globally is fed to livestock reared to end up on the dinner table.

Tony Lowe, the chief executive of FareShare, the national food charity, said: "Unfortunately, we live in a world where many people do not have access to food in general, and good-quality food specifically, while at the same time millions of tons of perfectly fine food are being disposed of. In the UK alone, the extent of food poverty is staggering, as millions of people with low or no income find it harder to access affordable, nutritious food."

If this is the amount of food wasted in tiny Britain, then it begs the question just how much is thrown away each year globally. Whilst we have over 800 million on this planet chronically malnourished, the simple truth must be that the earth produces enough food to make the planet morbidly obese. As ever, the profit motive kicks in and whether you are obese or emaciated depends, as ever, on your purchasing power.

Meanwhile, the Independent provides a list of ten tips to help cut the waste mountain. Note this is not ten tips to stop global hunger, like abolishing capitalism, freeing production from the artificial constraints of profit and establishing a global system of free access to the necessaries of life! While critical of the current global food “crisis” the Independent simply accepts capitalism is here to stay and suggests individuals change their personal habits. The master class gets off ‘scot free’ again! 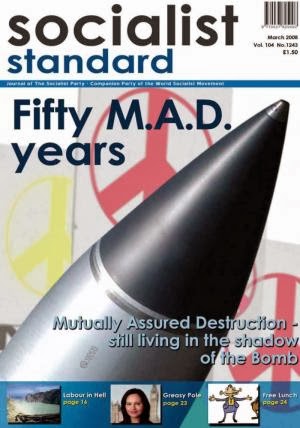 Editorial from the March 2008 issue of the Socialist Standard.


Fifty years ago this Easter CND was effectively born from demonstrations held outside the Atomic Weapons Research Establishment at Aldermaston, Twenty-five years on from Easter 1958, the Campaign for Nuclear Disarmament (and similar movements) had risen again, able to mobilise millions onto the streets of capital cities throughout Western Europe in response to a return to cold war US/USSR rhetoric.

During the 50 years of CND's history some things have changed: Trident has replaced Polaris and Faslane submarine base has replaced Greenham Common cruise missile base as the focus for protest. Meanwhile the global nuclear stockpile is now double what it was in 1958, and the number of nuclear states has also more than doubled.

And it wasn't just the badges with the distinctive CND logo that were recycled from the 60s to the 80s: the same kilogrammes of uranium or plutonium from scrapped and ageing warheads have been thoughtfully reused ten years later in the next generation of killing technology.

Despite the laudable aims then – as embodied in their title – the reality of CND is that it has been a front: a cover for the little-known CPPTSRNP (Campaign for Possible Partial, Temporary and Reversible Slowing of the Rate of Nuclear Proliferation). A bit more accurate, if a little clumsy when put on a banner, and hardly a good rallying cry for supporters of course. But CND has, by whatever measure you wish to use, failed. Not through lack of effort of course – no other issue dominated politics throughout the 60s, 70s and 80s.

The parties of the World Socialist Movement are unique in opposing all war – not just certain types of war or certain situations. This is based on a recognition that the interests of the working women and men who usually make up the cannon-fodder and collateral damage of war can never be aligned with states and governments. We oppose the monopoly that the global owning class have over ownership of the Earth's productive resources that are the usual spoils of armed conflict. We see little value therefore in pleading with our rulers to continue their capitalist battles, but to request that they use only this or that weapon.

In the Socialist Party we were sometimes told by CND supporters that there just wasn't enough time to work for socialism: there were only weeks or months left to stop nuclear annihilation and that objective had to be the priority. Thankfully that prediction proved to not be the case. But it is a common objection to the case for socialism, that there is some immediate more pressing campaign that – with just one final shove – will be won, and only then can we start to look to changing the basis of society.

The history of movements to reform one part or another of capitalism has been a history of failure in the main part. We can choose to tinker at the margins or to get to grips with the problem. We can complain about the symptoms, plead with our rulers, or make the decision to address the cause. The history of CND should give us no confidence that reformism is fit for purpose – certainly not with regard to trying to do away with weapons.

We predict that unless the war machine that is capitalism is politically challenged by a majority – armed with nothing more or less than an understanding of how it works – then in another 50 years we will still have wars raging round the globe, with ever more sophisticated weaponry. And of course, we will still have CND. The choice is between a world to win and a world to lose.