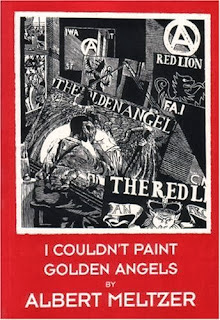 This is a confusing book full of confusing and ill-conceived statements. Ostensibly the autobiography of one of Britain's most well-known anarchists, its anecdotal nature overrides any pretensions to serious political thought. Lip-service is paid to the goal of a classless, stateless society very occasionally but it is no more than just that.

Meltzer is a self-styled 'man of action' of the anarchist movement whose protege, Stuart Christie, was famously convicted of terrorist offences; in this book action for its own sake is lauded to the skies, without apparent consideration of its effectiveness in achieving Meltzer's ultimate goal. In truth though, Meltzer has always been horribly confused on the issue of how to bring about a classless society - despite his many other undoubted qualities - so this is unsurprising enough.

His political confusion can be illustrated by his description of the old Independent Labour Party as an organisation with a "revolutionary socialist programme far beyond the grasp of most of its membership". Quite what he can have had in mind in writing this is difficult to say as anyone with any revolutionary and anti-statist credentials whatsoever during the ILP's hey-day must have realised that it was a reformist organisation through and through.

Meltzer also writes of the Russian dictatorship that "What reigned in Russia was not capitalism nor communism but the state in control of everything. Some dissident Communists introduced as an alibi a fiction that State Capitalism existed in Russia but all that oppresses is not capitalism". It is not indeed, but where class division, commodity production, wage labour and capital accumulation out of surplus value exist, then it's a pretty safe bet by anyone's book. And, of course, the theory of state capitalism was not introduced as an "alibi" by dissident communists, but as an original analysis based on the facts by the Socialist Party of Great Britain.

For some peculiar reason, when Meltzer talks about the Socialist Party on a couple of occasions, it is in the past tense and he writes that we were "a small sect of dogmatic socialists" founded "around 1910". For this he can get no other than nought out of ten for both originality and research, though ten out of ten for cheek, as Meltzer has spent all his political life in British anarchist groups like Black Flag and the Direct Action Movement which have made the SPGB look like a veritable mass party.

Frankly, when Meltzer writes of his admiration for Socialist Party orator Tony Turner when stopping to listen to him speak in Hyde Park at the outbreak of the Second World War one is left wishing that he had stayed a little longer and listened more intently, if only to spare us some of the confusion now.
DAP 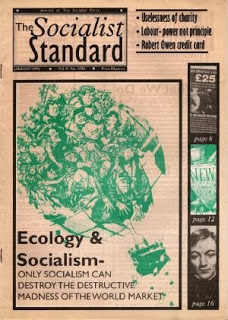 Editorial from the January 1996 issue of the Socialist Standard

Over recent years commentators, left and right, have argued that the phenomenon of "class struggle" has become an anachronism - something that died with the bad old days of the 70s. Those on the right have actively supported the subsequent attacks on the working class (mass unemployment, poorer conditions at work, etc.) as being a price worth paying for the "national interest". Those apologists for capitalism the left have floundered around condemning the "evils of Thatcherism", forgetting previous experiences of Labour governments and losing in the battle of ideas to the "realists" on the right.

Real socialists have remained resolute in our analysis of society. Capitalism is based upon the class antagonism between Capital and Labour. Although class struggle has operated at a relatively low level for so long, we have always maintained that this central feature of capitalist society will not go away while capitalism remains.

The explosion of popular unrest in France is testimony to this. As the economic crisis in capitalism forces France to cut its social spending - exacerbated by its move towards a single currency. The commentators who have previously written off "class struggle" have been forced to sit up and take note.

Workers everywhere can take heart from these developments. The working class in France has demonstrated not only working people acting as a class - but the power that class has in society.
This doesn't mean that socialism is around the corner or indeed that this is even the beginning of the end of capitalism.

This struggle is dominated by defensive reformist ideas and defensive institutions such as the trade unions. The positive point is that within such an atmosphere the potential for revolutionary ideas to spread is increased. This will mean workers breaking with reformist ideology (as indeed some have shown) and realising the only alternative is the political solution of world socialism.

There is no shortcut to this goal. It can only occur when the majority of the working class organise for it and achieve political power democratically.

Without this, struggles like the one in France will just become dates in the turbulent history of capitalism.
Posted by Imposs1904 at 10:23 PM No comments:

In an article in the Daily Mail (23 August) lamenting ‘the death of the middle classes’ Dominic Sandbrook wrote:

‘One day, predicted Karl Marx, ‘the lower strata of the middle class — the small tradespeople, shopkeepers and retired tradesmen generally, the handicraftsmen and peasants’, would begin to sink down the social ladder, crushed by the cruel economic logic of modern life. Society, he thought, would inexorably be divided into haves and have-nots, and tension would turn inevitably to violent revolution. Marx gloried in his own prediction. As the founding father of Communism, he looked forward to the ‘dictatorship of the proletariat’, when the middle classes would be extinguished and capitalism would be torn down.’

In the Communist Manifesto Marx and Engels did write something like this, but not exactly. Discussing the origin of the ‘proletariat’, or working class, defined by Engels in a footnote to the English edition of 1888 as ‘the class of modern wage-labourers who, having no means of production of their own, are reduced to selling their labour power in order to live’, Marx and Engels wrote:

‘The lower strata of the middle class the small tradespeople, shopkeepers, and retired tradesmen generally, the handicraftsmen and peasants — all these sink gradually into the proletariat, partly because their diminutive capital does not suffice for the scale on which Modern Industry is carried on, and is swamped in the competition with the large capitalists, partly because their specialised skill is rendered worthless by new methods of production. Thus the proletariat is recruited from all classes of the population.’

Earlier in the Manifesto Marx and Engels had pointed out:

‘The bourgeoisie has stripped of its halo every occupation hitherto honoured and looked up to with reverent awe. It has converted the physician, the lawyer, the priest, the poet, the man of science, into its paid wage labourers.’

Which has gone on ever since, despite the rise of the so-called ‘new middle class’ of salaried employees; these have not even been ‘reduced’ to ‘selling their labour power in order to live’ as they never were independent owners of their own business.

Sandbrook in fact takes it for granted that his ‘middle classes’ have to work for an employer when he writes ‘middle-class men and women once expected to have a job for life.’

Society is already divided into two classes: those who, not owning means of production, are forced to sell their labour power, whether for a wage or a salary, to live and those Engels in his footnote called ‘the class of modern Capitalists, owners of the means of production and employers of wage labour.’

It is true that the ‘tension’ between the two classes did not turn into ‘violent revolution’ as Marx and Engels had expected in 1848. Later they envisaged the possible conversion of universal suffrage into ‘an agent of emancipation’, not that this has happened either.

It is true, too, that Marx occasionally used the term ‘dictatorship of the proletariat’, but what he meant was the exercise of political power by the majority class of wage and salary workers, which he considered should be done democratically.

To tear capitalism down? Yes, by converting the means of production from the property of a tiny minority into the common ownership of the whole of society, so allowing production to be geared to meeting people’s needs instead of for sale on a market with a view to profit.

To extinguish the middle class? Yes, in fact of all classes. Together with the rest of the wider working class, today’s so-called middle class will commit suicide by abolishing itself.