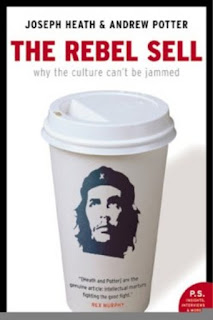 I finished this book wondering just what I'd been reading. It's largely aimed at the 'counterculture', a notion which seems to encompass everything from anarchism and the Sex Pistols to Naomi Klein's No Logo and the Situationists.

The countercultural critique of capitalism, so Heath and Potter argue, is far more wide-ranging than that of Marxism, which is concerned with abolishing exploitation and establishing common ownership. In contrast, the counterculture aims at a society without institutions and regulations, though it's usually very vague as to what a free society would actually be like.

But, the authors continue, countercultural rebellion is in practice counterproductive: it distracts attention from initiatives to bring about real improvements in people's lives and even encourages contempt for such changes.

To the extent that attacking such an ill-defined set of ideas makes sense, there is a fair amount here that Socialists could agree with. The whole notion of 'fair trade', for instance, has become itself part of the competitive selling industry, as has other merchandise produced by various countercultural organisations. If you buy from the Body Shop because it makes you feel morally superior, then you're just being driven by a desire not to conform.

However, it's in their positive prescriptions that Heath and Potter go wrong. You might interpret their critique of countercultural rebellion as applying also to the Socialist insistence on advocating revolution and opposing reformism. Their case for this rests on two pillars. The first is that it's better to 'plug the loopholes, not abolish the system', i.e. they advocate reforms of capitalism. But the measures they advocate are pointless, such as introducing a progressive income tax on the grounds that lowering income would lower consumption.

The second pillar is, in effect, the impossibility of a socialist society. Of course, the authors never actually deal with the idea of a society based on production for use, since they consider that the only alternative to a market system is centralised production of the type formerly seen in Russia. But they regard a market system as inevitable, and advocate the kind of ideal market described in economic textbooks (presumably because these only exist in books, not in the real world).

Writers like Murray Bookchin (author of Post-Scarcity Anarchism) are criticised on the grounds that 'in our society, scarcity is a social, not a material, phenomenon'. Scarcity therefore cannot be overcome through increasing production: fast cars and 'cool' clothes, for instance, are necessarily scarce because their value depends on providing a distinguishing feature to those who consume them. But a society of free access will work on a very different value system and so won't involve people trying to look or live differently from their friends and neighbours.

So perhaps the answer to my wondering about what the book is would be that, though the authors never use the terms directly, it offers an unconvincing defence of reformism and criticism of socialism.