Obituary from the June 1996 issue of the Socialist Standard

The death of James McMillan in March was a shock to all members of the Glasgow Branch.

James was a character. Outside the Party he was known as "Maxie’’or “Jimmy the Pill". Inside it, he was known affectionately as "Wee Jimmy”. Wee Jimmy had a ready wit and was known for his quick-fire delivery. A couple of examples may give some idea of the man. At a party where a non-socialist objected to his swearing and said "Please don’t swear in front of my wife", Jimmy replied "I'm sorry, comrade, didn’t know it was her turn.” On his early life in the East End of Glasgow, he would comment “If there was an egg short, I got it” When a family friend read his tea-cup and said “Maxie,. I see a stranger in your future”, he asked "Is it the butcher?” Wee Jimmy joined the Party in 1965, he was an ever-present at the many outdoor meetings of the Party in the sixties and seventies. He never deviated in his socialist principles.

Our sympathy is extended to his sister, Winnie and his brothers, John and Peter. He will be missed. 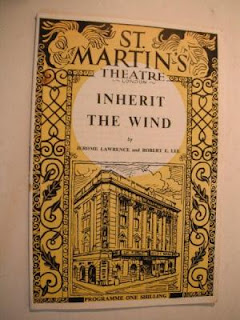 Theatre Review from the June 1960 issue of the Socialist Standard

In July, 1925, at the town of Dayton, Tennessee, a school-teacher was charged under a State law with teaching the Darwinian theory of the origin of man instead of the story in Genesis, as the law demanded.

The case was defended by the great liberal lawyer Clarence Seward Darrow, who was famous for defending many workers in cases that had arisen through their Trade Union struggles; a man who was by many derisively regarded as the friend of criminals, because he considered that society was to blame for their actions, being responsible for not only making men into criminals but also for defining at any time what was criminal and what was not, according to its own interests and prejudices.

Jerome Lawrence and Robert E. Lee have taken the case of the Tennessee schoolteacher John Scopes, and made it the basis of their play Inherit the Wind, which had a regrettably short run at the St, Martins Theatre. The play is not an actual report of the trial and the authors have changes the names of the participants, so that what we have are the essentials of the case and its conflict. This conflict is between the cant and superstition of unsophisticated religion and the enlightenment of “atheistic” science and is played  against the background of the American Middle West with its particular pioneer traditions of suspicion, intolerance and isolation, which looked upon science not only as an encroachment on its religion and a device of the Devil, but as a threat to its way of life.

The Legislature of the State of Tennessee had laid down that it was unlawful for any public teacher “to teach the theory which denies the story of the divine creation of man as taught in the Bible and to teach instead that man has descended from a lower form of animals.”* It is also of interest to note that similarly, the State Legislature of Florida had declared it “improper and subversive of the best interests of the state for any public teacher to teach as true Darwinian or any other hypothesis that links man in blood relationship to any other form of life."*

It was against thinking of this kind and every obstacle that could be put in his way, including the refusal to allow the testimony of eminent biologists, and the prosecution’s able lawyer, William Jennings Bryan, that Darrow had to fight in his defence of John Scopes. Bryan was a man who held “firmly with childlike faith to a literal interpretation of the Bible,” who was “hostile to the teachings of biological science which he had never had the inclination to study.”*

Darrow was moved by his abiding interest in science and his deep commitment to freedom of thought to volunteer to defend Scopes. He was in fact “of an astonishing variety of intellectual and social currents: skepticism in philosophy and religion, determinism in psychology, evolution in science, realism in literature, a farrago of socialism and anarchism in politics.”*

The outcome of the trial was a farcical compromise to save the face of the community, forced by Darrow's brilliant defence and the weight of American public opinion. The teacher John Scopes was simply fined a nominal sum.

So far as Bryan was concerned, says the American Dictionary of National Biography, “the trial only revealed the naivete of his religious faith and his want of familiarity with the trend of biological science." Already an old man, the strain of the trial brought him to his death five days later.

Inherit the Wind conveys with a fair degree of authenticity the setting and atmosphere the trial, though the ending of the play is spoilt by anti-climax. The authors have conceded a point to the prevailing public morality, giving the impression that it is not religion itself that is questionable but merely fundamentalist religion; which is false not only to Darrow and to science, but to the spirit of the play also. Nevertheless, the play is not only good theatre, but a refreshing reminder of the gradual retreat of religion (and other fetishes), which makes our Socialist task that much easier.
Ian Jones

* American Dictionary of National Biography.
Posted by Imposs1904 at 7:32 AM No comments: 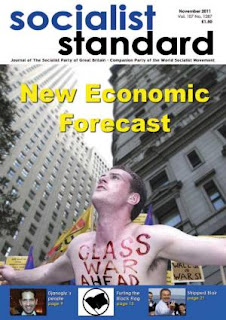 The Cooking the Books column from the November 2011 issue of the Socialist Standard
The slump has led to a revival of long-forgotten nostrums. Last year the Times (10 June) carried an article advocating a single tax on land as a way out of the crisis. This proposal normally associated with Henry George (1839-1897), but Philippe Legrain chose to associate it with Winston Churchill. Hence the subtitle of his article: “Adopting Churchill’s plan would benefit wealth creators at the expense of the idle rich”.
It is true that a hundred years ago, when the Liberal government of the day was in a power struggle with the House of Lords over the budget, Churchill who was then a Liberal did support a tax on land as a way of getting at the landed aristocracy.
Some harsh things were said in the course of this struggle with the likes of the Duke of Westminster and Churchill’s cousin, the Duke of Marlborough, being denounced as “land monopolists” and the “idle rich”. As indeed they were. Those who own a piece of the Earth’s surface are able to extract an income from the rest of society as ground-rent without having to lift a finger; the higher the demand for their land, the higher their income. In capitalist society this has to come out of the surplus value created in capitalist agriculture and industry. Naturally it was resented by the capitalist class who at least have to arrange for their capital to be invested before they can obtain their property income.
Henry George’s idea was to tax away the whole of the ground-rent of landowners and use it to relieve the capitalist class of the need to pay any taxes. Churchill, Lloyd George and the others didn’t want to go that far, but they still wanted to tax the mere ownership of land. Legrain repeats their argument:

‘The country's biggest private landowner, the Duke of Buccleuch, owns 277,000 acres, not because of his talent or industry, but because his ancestors seized vast swaths of Scotland. These "land monopolists" — as Churchill dubbed them — get richer not through their own efforts, but that of others. The Duke of Westminster owns 300 acres of what was once fields and is now London's priciest real estate — Mayfair and Belgravia. And because so many people have established thriving businesses in the capital, that inheritance is now worth billions of pounds. Surely it would be better to tax that windfall gain, rather than the employees and entrepreneurs who generate it?’

The landed aristocracy lost the political battle and in 1911 the House of Lords had its wings clipped. But they kept their property. According to Legrain, in Britain today ‘0.3 percent of population owns 69 per cent of the land.’ The latest Sunday Times Rich List puts the Duke of Westminster as the 4th richest person in Britain with a pile worth £7,000 million. The Duke of Buccleuch is equal 381st with “only” £180 million, but that’s because land in the wilds of Scotland is less in demand than land in central London. Other bluebloods monopolising land in central London are Earl Cadogan (21st with £2,850 million), the Howard de Walden family (33rd with £1,820 million) and Viscount Portman (53rd with £1,200 million).
The Queen, who besides being the figurehead of the British capitalist state is a landed aristocrat in her own right, is equal 257th with £300 million. Other titled landowners with more than her are the Duke of Devonshire, the Duke of Sutherland and the Duke of Northumberland.
Their wealth is obscene and not justifiable even by capitalist standards. But Legrain is mistaken. Taxing away their rents would not benefit the real “wealth creators”, i.e. the wage and salary working class, but only the capitalist class by reducing the tax it has to pay.
Posted by Imposs1904 at 6:24 AM No comments: