Just a wee bulletin to mention that the June 2006 Socialist Standard is online. People who would like to read it in all its glory as a colourful pdf can click on the following link:


People who might just want to check out individual articles and book reviews can also click on the links listed below.

As mentioned previously, people can take advantage of the offer of the free three trial subscription to the magazine. Details of how to go about ripping the arm off of the person offering up this generous freebie are available on the profile page. Just remember to mention MySpace when sending in your request - it keeps Rupert Murdoch happy.


all the best,
Darren
The World Cup and Workerism Blog

The regular science column in the Socialist Standard. This month's articles are about how some people will seek to swap the real world for a virtual one.


The British National Party Advances - What Does It Mean?

The BNP gained seats in the May local elections because it put together a better package of lies than the mainstream parties.

The witch hunt against ex-prisoners from abroad shows that xenophobia is now more than ever official policy.

Regular economics column in the Socialist Standard carries articles on Capitalist Ideals & Towards an Economic Crash? 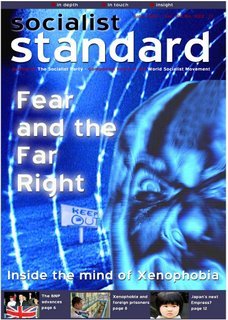 The Equality Act, which came into force earlier this year, covers discrimination on the grounds of religion or belief, sexual orientation, gender, disability and race. Yet it illustrates the point that government legislation cannot in itself change people's attitudes.


Japan: A Woman for Emperor?


JK Galbraith: a Radical Keynesian
An economist who remained loyal to the end to the discredited view that
government intervention can make capitalism work in the interest of the

Regular monthly column in the Socialist Standard that looks at current British politics from a historical angle. This month's article, looking at the increasing specualtion surrounding Tony Blair and how he might step down as Prime Minister before his full third term of office is completed, writes of how a a strategically timed withdrawal from government need not ruin a political career.


Voice From The Back

An irreverent look at the insanity, greed, barbarity and hypocrisy of capitalism.