More Slaughter in the Middle East (2006) 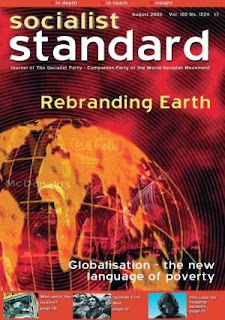 Editorial from the forthcoming August 2006 issue of the Socialist Standard

Once again in the Middle East innocent workers are being killed and useful structures destroyed. The immediate cause was the capture in a raid from Lebanon of two Israeli soldiers but the ultimate isssue was, once again, who controls this oil-rich region: the US and its allies or various local elites?

All states are artificial and illegitimate but Israel is particularly so. Set up by colonists from Europe on the basis of fables recounted in a book supposedly emanating from a god, it has been armed and financed by the United States as its only reliable ally in the region. Over the years it has acted as Americas gendarme there to deal with sections of the local Arab ruling classes who have sought to challenge US domination. These sections, in their turn, have identified Israel for what it is and have sought to destroy it and have been able to win considerable popular support.

This is not to say that Israel is under direct US control. The rulers of Israel have their own agenda and can, and do, act independently of their protector. But thats a price the US has to pay to avoid sending its own troops to fight and die there. The US would like some compromise solution between Israel and local Arab elites but in the meantime gives Israel a virtual free hand, only issuing ritual appeals to it to exercise restraint.

Hezbollah, the Shiite militia in Lebanon, is armed and financed by two states whose regime the US has vowed to change: Iran and Syria. It is entirely possible that the present crisis was deliberately provoked by Iran, which has ambitions to be the dominant regional power, as a means of bringing counter-pressure on the US in the diplomatic trial of strength going on over its nuclear programme, a means of showing that it too is not without bargaining counters. Israel, incidentally, is without doubt already a nuclear power, which shows up the US hypocrisy over the spread of nuclear weapons.

So, as a conflict over which states and ruling classes should dominate the region, no working class interest is involved except in so far as it is they who are its innocent victims and need the killing, maiming and destruction to stop. Socialists are always spontaneously on the side of the oppressed against the oppressors and the massive use of overwhelming force by the state of Israel clearly exposes it as the oppressor. But just because we sympathise with the victims of Israeli oppression does not mean that we favour the solutions popular amongst them.

A Palestinian state would be a capitalist state. "Anti-imperialism" is the slogan of local elites who wish to dominate the region in place of the US, a situation which would still leave the mass of the population there exploited and oppressed with the eternal problem of finding enough money to buy the things they need to live.

The only lasting way out is to get rid of capitalism and replace it by a world society of common ownership and democratic control. On that basis, the resources of the world, including oil, could be extracted and used for the benefit of all the people of the world. Poverty and misery in the Middle East, as elsewhere, could be ended once and for all. The waste of arms and the horrors of war would disappear.

Socialism is, quite literally and without exaggeration, the hope of humanity.
Posted by Imposs1904 at 5:11 AM No comments: