Why Gould was wrong, and why Dawkins might be even more wrong (2007) 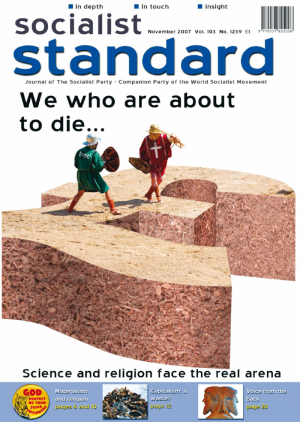 A science writer who knows how to communicate to a lay audience is a rarity. But to find two in the same field, battling each other’s ideas in the public domain, is a real treat, and the long-running contest on evolutionary theory between the late Harvard palaeontologist Stephen Jay Gould and the Oxford ethologist and biologist Richard Dawkins was a gem of the first rank. If the modern science-inclined public has better than a cartoon Darwinist grasp of the complex story of evolution it is in no small thanks to these two outstanding writers.

While the debates were never quite this simplistic, it’s fair to say that the two men followed distinctive trends in their thinking. For Gould life was largely a series of existential accidents, without purpose or goal, and with many evolutionary jokes and anomalies thrown in. One has only to consider the Permian extinction, which killed 95% of all species on the planet, to understand how capricious nature can be. And that was only one of five great extinctions, each clearing the decks for an explosion of new and unprecedented life-forms, each a blind roll of the dice. As Gould was fond of saying, if you rewound the tape of evolution back to the beginning and replayed it, humans would probably not appear, and nothing would come out the same.

For Dawkins, in comparison to this a galloping determinist, such randomness was anathema. Though never a crude ‘adaptationist’ of the sort Gould ridiculed, the sort who looks for an evolutionary purpose behind everything, Dawkins would still tend to look for the angle. And there are reasons for thinking there are reasons for things. As James Marden, professor of biology at Pennsylvania State University put it, when writing of ‘constructal theory’ in August 2006:


"Our finding that animal locomotion adheres to constructal theory tells us that -- even though you couldn't predict exactly what animals would look like if you started evolution over on earth, or it happened on another planet -- with a given gravity and density of their tissues, the same basic patterns of their design would evolve again,"(From here.)

Thus, for Gould, the world was a matter of sheer luck, for Dawkins, a matter of rules. What made it interesting was that they were both right. But what makes it even more interesting is to reflect how their vastly different approaches manifested themselves when considering the festering problem of religion.

If the world was a random lottery of chance, as Gould saw it, with species doing their best to keep their fingers crossed and fit into whatever niche they could find, then surely one’s only hope was to make the best of a bad lot and accommodate oneself to the world in whatever way one could. Seeing that society was redneck-deep in religious ignorance and superstition, and seeing that the outnumbered forces of reason and science had no realistic prospect of defeating them, then the best survival strategy must surely be to reach an accommodation with them.

Thus the idea of ‘non-overlapping magisteria’, or NOMA. The term ‘magisterium’ is ecclesiastical, meaning ‘area of authority’. The idea was that science had its area of undisputed authority, and religion had its area, and provided that science did not interfere on the priests’ turf and religion didn’t interfere in science, everyone should be happy. Gould was hoping at best for some form of symbiotic equilibrium, which was a faint hope, and also something of an irony. If there was one man alive who was least likely to believe in the viability of long-term equilibrium in anything, it was Gould. Thus, the chief proponent of the idea that such ‘equilibria’ in nature were forever getting themselves ‘punctuated’ to devastating effect (the extinctions, for example) now found himself uncomfortably proposing the very opposite.

Needless to say, Dawkins treated Gould’s notion of NOMA with undisguised derision, branding it the ‘Neville Chamberlain school’ of appeasement (The God Delusion, p. 67). For, argues Dawkins, the religious side would never stick to their side of the partition, partly because beliefs such as the belief in miracles require real-world alterations to the laws of physics, and partly because the canting hypocrites constantly seize and flourish any scrap and gobbet of scientific evidence that appears to support their nutty ideas. But Dawkins doesn’t merely distrust the religious theologians, he actively despises them and refuses to accord their area of ‘authority’ any respect at all. Where Gould appeared to ‘bend over backwards to be polite’, Dawkins retorts: ‘I don’t think we should even throw them a sop’.

Delightful and refreshing as this undoubtedly is for thinking atheists everywhere, others, scientists among them, are bemused by Dawkins’s belligerence. But, unlike Gould, in Dawkins’ world there are rules. And if the world is built on a base of rules, then it follows that there is an optimal or correct structure or order, and a sub-optimal or incorrect structure. Two different structures would be mutually exclusive, and therefore inevitably in conflict, a conflict only resolvable upon the death of one or other of them. It is in consequence an evolutionary directive for incompatible systems to attempt to destroy each other. For Dawkins, if science doesn’t kill religion, religion will surely kill science.

The same argument can be had among socialists, some arguing that religion can be ‘accommodated’, others that it must be destroyed. Not surprisingly, Gould and Dawkins didn’t agree about politics either. Gould was a progressive liberal with socialistic tendencies, not unlike the class-savvy Carl Sagan. Dawkins is a conservative who identifies the processes of capitalist trading as being prefigured in our ‘altruistic’ or ‘dealing’ genes, and whose conception of social history betrays no recognition of the role of class struggle. Thus he celebrates, in The God Delusion, how the ‘zeitgeist’ has changed remarkably, but in the absence of the dynamic of class can offer no explanation for it beyond feeble references to ‘charismatic leaders’ and ‘role-models’. This failure to grasp the real forces of social relationships, more than anything else, is what sidelines Dawkins’ polemic against religion. Gould may have been wrong in trying to compromise, but in his better understanding of the totality of the conflicts in capitalism he had his eye on a much larger picture. For Gould, as for Sagan, the imperative was not mutual ideological destruction, but consensual growth. Put simply, you have to take people with you, or they will desert you. For socialists too, who rely on a consensual understanding to effect socialist change, it’s not just a matter of beating the other guy in the argument. For all his engaging chutzpah, Dawkins is arguably fighting the wrong battle, in the wrong way, in the wrong war.