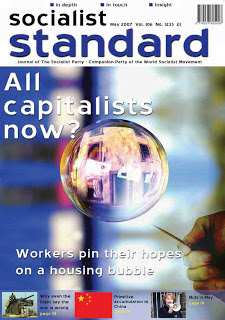 From the May 2007 issue of the Socialist Standard

Capitalism is not able to develop until, in addition to the accumulation of wealth in the hands of a few people, there were also vast numbers of men and women free to sell their mental and physical energies, their labour power, for wages, and "free" from other means of obtaining a living such as the ownership of land. This, according to Karl Marx, was — and is — the primitive accumulation of capital. Peasants in England, Scotland, in continental Europe and, later, elsewhere were forced off the land and herded into factories. Today, we witness a similar situation in China and its so-called autonomous province of Tibet. Feudalism, even pre-feudalism and compradore capitalism, is being replaced by full-blooded capitalism known to the West for a century.

Until the 1980s, 80 percent of the Chinese labour force worked on the land. They were an enormous source of exploitable labour. During the last quarter of a century, however, millions of peasants have, by force, harassment or the promise (bait) of a better life, migrated to the ever-expanding cities of the People's Republic of China. For a few, life has indeed improved, even if they have become exploited wage slaves. But for most?

According to Amnesty International (reported in the West Australian, 3 March), millions of Chinese workers who have moved from the countryside to serve the country's expansion are "overworked, underpaid, denied access to health care, education for their children, and even the right to live permanently in the cities which use their labour," and are treated as an underclass. Continues the Amnesty report:


"They are forced to work long stretches of overtime, often denied time off when sick, and labour under hazardous conditions for paltry wages. As well as being exploited by employers, migrant families face discriminatory government regulations in almost every area of daily life."

They are, says the West Australian, easily exploited by unscrupulous bosses, many of whom withhold their wages, knowing, in the end, the workers will simply be forced to return home. Indeed, conditions in China today often parallel those chronicled by Marx and Engels in 19th century Britain. Conditions in the coal mines are particularly bad, with as many as 5,000 miners dying, and thousands more injured, every year in the cities, workers are herded into "shanty towns" or squalid apartments. According to the report, most workers in China "lack free trade union representation in their factories and restaurants, often working 14-hour days, 30 days a month . . ."

Strikes are illegal. But, as we know, they, as well as riots and even mass revolts, have occurred throughout the history of the People's Republic of China. The class struggle is alive and well! Meanwhile, a very rich minority of capitalists, of whom many are or were Communist Party functionaries, and factory managers, have emerged in China during the last 20 years or so. One such capitalist Yan Jiehe, is said to be worth more than £850 million.