Book Review from the April 2006 issue of the Socialist Standard

This is another erudite yet readable book by Jared Diamond, following on from The Rise and Fall of the Third Chimpanzee and Guns, Germs and Steel. His theme this time is how and why past societies have or have not collapsed, and how an understanding of such issues may be of help in the present-day world. The Maya civilisation of central America, for instance, collapsed in the early tenth century CE, after a period of 700 years or so. A number of contributing causes can be distinguished: population outgrew available resources, deforestation reduced the amount of available farmland, fighting among the Maya increased, a severe drought occurred, and the rulers had no interest in long-term concerns.

Diamond distinguishes five points that are generally relevant to societal collapse: environmental damage, climate change, hostile neighbours, friendly trade partners, and a society’s responses to its environmental problems. Often, for instance, forest will be removed and soil eroded, or newly-introduced animals may eat native species or destroy crops: all this may cut the numbers who can survive in a particular area. Destroying unrenewable resources is particularly crucial. Unfriendly nearby societies can also play their part in disrupting production and everyday life. Globalisation has increased the importance of other (not necessarily nearby) parts of the world: China, for instance, accepts untreated garbage, including toxic waste, form other countries (for a fee, of course).

Like his other works, Collapse is wide-ranging and thought-provoking, containing much material that we can’t do justice to here. A useful chapter on the Rwanda massacres of the 1990s makes the point that it was not a simple matter of Hutu against Tutsi. Many other factors played a part, including population pressure and falling world coffee prices. The final chapter asks what all the facts and theories that have been marshalled before mean to us today, emphasising ‘the unsustainability of a world in which the Third World’s large population were to reach and maintain current First World living standards.’ Diamond’s conclusion is that we need ‘the political will to apply solutions already available’, as if it were merely a matter of convincing politicians to do the right thing.

In fact he is far too uncritical in his acceptance of capitalism as the framework within which present-day problems have to be solved. He is well aware that companies exist to make profits, not as charities concerned to protect the environment. Yet, he says, it is not enough to blame companies, for ‘ultimate responsibility’ lies with us, ‘the public’, since we supposedly have the power to make destructive environmental policies unprofitable, e.g. by means of consumer boycotts or pressurising politicians to pass laws that force businesses to clean up the mess they have created. Sadly, this ignores the fact that capitalism needs profits and, while companies will sometimes be keen to play the environmental card if it suits them, they have to put profits first. No amount of legislation or boycotting can change this.

So the c-word to ponder is not ‘collapse’ or ‘climate’ but ‘capitalism’. And the political will that matters is the will to replace capitalism with a sensibly-organised society, within which problems can be tackled in a way much more likely to yield effective solutions.
Paul Bennett
Posted by Imposs1904 at 8:34 PM 1 comment: 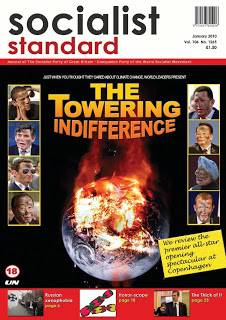 
Given the competitive nature of capitalism any agreement on trying to deal with climate change was bound to be feeble and inadequate.

If we were living in a rationally-organised world, and a problem such as the threat of a too rapid global warming arose, a co-ordinated global response would be organised as a matter of course. If it was generally agreed amongst scientists specialising in the field that the problem had been caused mainly by the burning of fossil fuels, then steps would be taken to cut this back and to phase in alternative sources of energy. The problems encountered in doing this would only be technological, not political or economic, as there would be no vested interests manoeuvring and lobbying to prevent or delay what needed to be done from being done.

But of course we are not living in a rationally-organised world. We are living under capitalism where there are vested interests galore – of the states into which the world is artificially divided, of the capitalist corporations seeking to make a profit by supplying some market or other. Certainly, the United Nations exists but it is only the arena in which these vested interests jockey for position and advantage, as was too plainly evident at the UN conference in Copenhagen last month on climate change.

This is what the arguments there were all about – who is to bear the burden of cutting back on CO2 emissions? It wasn’t just a North-South clash. Each capitalist state had its own interests (those of its capitalists) to defend, with those more dependent on or with more reserves of coal or oil dragging their feet. Because, if the use of fossil fuels is to be cut back or is to be made more expensive this would affect them proportionately more. Their production costs would go up more, putting them at a competitive disadvantage on world markets. Which is why President Bush notoriously declared about the Kyoto Treaty.


“I made the decision . . . that the Kyoto treaty didn’t suit our needs. In other words, the Kyoto treaty would have wrecked our economy, if I can be blunt . . . I walked away from Kyoto because it would damage America’s economy, you bet. It would have destroyed our economy. It was a lousy deal for the American economy.” (Interview with Trevor MacDonald, ITV, 4 July 2005).

He was right. The US would have suffered economically if it had signed. Obama is taking a less confrontational approach, but he still has to bat for US capitalist industry, arguing for the continued use of coal and oil but introducing new technology to try to stop so much of the CO2 getting out into the atmosphere.

Chris Harman in his book Zombie Capitalism quoted some relevant statistics which show why the EU has been more keen than the US to cut back on burning fossil fuels:


“The national structures within which accumulation takes place depend to very different degrees upon carbon energy. The US was self-sufficient in oil until the early 1970s, its structures of accumulation and consumption became very highly dependent on oil and that means that today it has 20.2 tons of carbon emission per person; the main West European states lacked domestic oil resources, developed rather different structures of accumulation and consumption (with petrol, for instance, about three times the cost it is in the US), and so have far only 8.8 tons of emissions per person; China's rapid industrialisation and urbanisation are based on massive amounts of coal and its total emissions are close to that of the US figure, even though its emissions per head in 2004 were only a little over a sixth of the US figure and 40 percent of the West European figure. These enormous differences mean that measures that seriously cut back on emissions would hit firms based in different countries very differently. It is this which explains why the European Union seemed more committed to action against climate change in the early 2000s than the US; its national states stood to gain from measures that would proportionately hit US-based industries more than their own” (pp. 316-7) 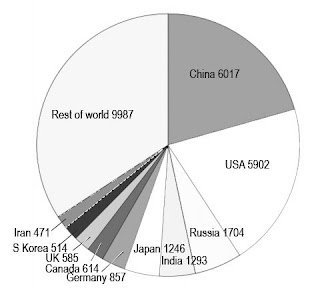 The OPEC countries, led by Saudi Arabia (where they still really do believe that the Earth is flat), are, for obvious reasons, opposed to reducing oil consumption. In the manoeuvrings before the opening of the conference, their representative was reported as saying “if you cut your oil use we want compensation” (London Times, 2 December). So do they all.

It is the differing economic interests of the various capitalist countries that work to make any international action to deal with this world problem feeble and inadequate. It’s the same with other world problems, even purely capitalist ones. Baron (then simple Mr Peter) Mandelson, when he was the EU Commissioner in charge of trying to negotiate a reduction in tariffs on world trade, remarked (before the Doha Round ended in failure):


“If, after seven years, you cannot complete a trade round, what does that say for your prospects of reaching a deal on climate change?” (London Times, 21 July 2008)

What indeed?
Some are well aware of what the obstacles are. Thus pioneer global warming scientist James Hansen said just before the conference started:


“The fundamental problem is that fossil fuels are the cheapest form of energy. As long as they are, they are going to be used” (London Times, 3 December).

However, naively, he sees the solution as imposing a carbon tax to raise the price of fossil fuels, so making the price – and so the use – of alternative fuels such as renewables and nuclear proportionately more competitive. But that’s easier said than done as who is going to make the US and China pay this tax that would undermine their competitiveness? In fact, as Copenhagen showed, nobody can impose anything on these two powers, the Nº1 and Nº2 CO2 emitters.
Lord Oxburgh, then chairman of Shell UK, speaking at the Greenpeace Business Lecture in January 2005, pointed out:


“Whether you like it or not, we live in a capitalist society. If we at Shell ceased to find and extract and market fossil fuel products while there was a demand for them, we should fail as a company. Shell would disappear as any kind of economic force” (Independent, 26 January 2005).

These are the hard facts of current economic life which those campaigning against climate change are up against. As long as they are cheaper, coal and oil will be used. And no capitalist corporation in that line of business is going to commit economic suicide by not seeking to make profits from supplying this paying demand for coal and oil.

If those concerned about the threat of a too rapid climate change would think the matter through they should be campaigning not for capitalist governments and corporations to change their spots but for the end of capitalism.
Adam Buick
Posted by Imposs1904 at 3:35 PM 1 comment: