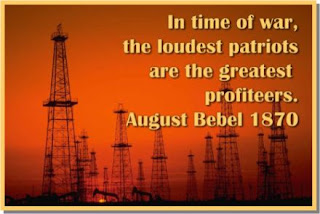 From the March 2008 issue of the Socialist Standard
Since our formation in 1904 our response to the problem of war has clearly distinguished us from other organisations claiming descent from Marx and Engels and the early socialist pioneers.
We analyse social affairs in class terms. We approach problems in the field of economics and politics from a consideration of what we see as being the real interests of the world working class. It is our contention that there are only two classes in present day society. Firstly, the working class, who collectively produce the wealth of society and who, in order to live, have to sell their ability to work for a wage or a salary. Secondly, the capitalist class who accumulate profit through the economic exploitation of the working class.
This situation leads to an inevitable conflict of interests and the generation of social and economic problems that cannot be solved while capitalism of whatever form continues. Commodity production (production of wealth for sale with a view to profit) inevitably brings conflict over access to markets and sources of raw materials, and for the control of trade routes, and for strategic point around the globe. Attempts are made to resolve these conflicts through discussion and diplomacy. Where diplomacy fails there remains the threat of force of arms to get what is wanted. From time to time this clash of interests breaks out in armed conflict. For the Socialist Party “capitalism and war are inseparable. There can be no capitalism without conflicts of economic interest.” ( SPGB: War and the Working Class. 1936. p.1)
Within a year of our founding the Party published an article putting forward our view on war. In it the author wrote:


“I do not think it will be questioned by any socialist that it is his duty to oppose the wars of the ruling class of one nation with the ruling class of another, and refuse to participate in them.” (‘The curse of national prestige.’ Socialist Standard, August 1905.)

This has been our consistent view ever since. So long as the working class continue to support capitalism so long will its wars, and preparations for war, continue. Before the mass slaughter of the First World War we argued that because wars were the outcome of economic and strategic conflicts between the capitalists of the various nations any attempt to abolish war while those economic conflicts remained was bound to be futile. International meetings passing pious resolutions aimed at achieving “universal disarmament” were doomed to failure. This is what one early member wrote in December 1910 about a pre-World War I peace campaign:


“[That] the ‘anti-war campaign’, as such, is, from the working class standpoint, absurd. Just as the class struggle cannot be abolished save by abolishing classes, so it is impossible for capitalist nations to get rid of the grim spectre of war, for Capitalism presupposes economic conflicts which must finally be fought out with the aid of the armed forces of the State.” (‘Socialism and the anti-war campaign.’ Socialist Standard, December 1910.)

The only solution to war and the myriad other problems that face the workers of the world is to abolish capitalism and replace it with socialism. This involves democratic political action by a majority of the working class who understand the need for change and know how to bring it about.
We do not call for people to love one another (though we are not opposed to that of course) rather we appeal to the workers of this and other countries to recognise their common class interest and to organise consciously and politically to gain the political power necessary to dispossess the owning class – to strip them of their right to own the means of life – and to put in its place a system of common ownership and democratic control of the means of wealth production – socialism.
Socialism will be a classless, propertyless and moneyless world community of production directly for use without the mediation of buying and selling. Nothing else will suffice. Abolition of class ownership will result in the abolition of conflicts of interest both between the owners and the non-owners and also between competing national groups of owners organised politically into armed nation states. We can conceive of no situation in which we would give our support to either side in any of capitalism’s armed struggles.
The role of the Socialist Party in helping bring socialism about is one of agitation and education. We are an instrument to be used by a conscious working class once the need for a revolutionary social change is recognised. Because they don’t stand for socialism, we are “hostile to every other Party”, even to those which claim to have socialism as their goal.
Much of our argument with the left-wing revolves around their demands for reforms. Most radical left-wing parties say (or in the case of the Labour Party used to say) that their goal is “socialism“. However they also pursue reforms of capitalism as “stepping stones” to socialism. Any political party doing this soon find themselves saddled with the problems inevitably associated with the running of capitalism.
In an article written in the Journal of Modern History on the eve of the Second World War the historian Harry J. Marks dealt with the collapse of the German Social Democratic Party as a revolutionary party in 1914. He encapsulated and highlighted the dangers to a working class movement inherent in the pursuit of reforms. The author wrote that:


“By accepting the policy of the German Government on August 4, 1914, as fundamentally its own, the role of this enormous organisation as an independent factor in world history sank to insignificance and became no more than that of a cog to gear the labour movement into the German war machine.” (Harry J. Marks: ‘Sources of Reformism in the SDP of Germany 1890-1914.’ Journal of Modern History XI (1939) p. 334.)

Our hostility therefore is no mere semantic quibble. It goes to the heart of our case against adopting the “something now” approach to problems, including the problem of war. Unlike those on the left who are choosy as to which wars they object to, we in the Socialist Party are against all of capitalism’s wars. Nor do we single out one or two aspects of war – atomic weapons, or land mines, or poison gas, or the use of child soldiers – we oppose the system that give rise to these things.
Both the established capitalist class and those intent on joining them by force of arms need these weapons to defend and advance their interests against threats from competing groups of capitalists also armed to the teeth to defend their interests. The working class on the other hand have no such interests to defend. The workers have no country. What they do have is a common interest in making the world the common heritage of all who live in it.
Gwynn Thomas
Posted by Imposs1904 at 7:46 AM No comments: