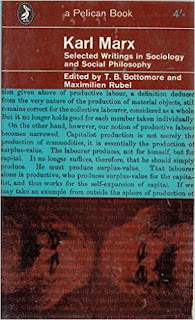 
One of the books the Socialist Party recommends to those wanting an introduction to Marx's ideas is Karl Marx: Selected Writings on Sociology and Social Philosophy, edited and introduced by T.B. Bottomore and Maximilien Rubel. First published as a hardback in 1956, it has since gone through many Pelican paperback re-editions and is, as its title suggests, a collection of extracts from Marx's writings. What does not come out in the introduction is the extent to which Rubel (as opposed to Bottomore) endorses our interpretation of Marx on a number of key points. However, in a later work, Marx Without Myth (1975), also written jointly in English (this time with M. Manale), Rubel clearly spells out that Marx stood for a classless, stateless and moneyless society.


Rubel himself is not from Britain but is a professor (maitre de recherche) in France and in fact one of the leading continental Marxologists, or experts on Marx. Besides editing a French edition of Marx's works, he has done considerable scholarly research on Marx's writings and sources. He describes himself as an independent researcher on Marx (which is true), but his sympathy for Marx's social and political ideas is only thinly disguised. His contribution to Marx-studies is his view that Marx was not a Marxist and his interpretation of Marxs commitment to socialism as ethical.


Marx himself of course is on record as saying half-seriously that he wasn't a Marxist. Rubel's theory is that Marx did not regard himself, and is not to be regarded, as the founder of a new philosophical school or ism. Marx, Rubel points out, himself described communist (socialist) theory as in no way based on ideas and principles that have been invented, or discovered, by this or that would-be universal reformer. They merely express, in general terms, actual relations springing from an existing class struggle, from an historical movement going on under our very eyes (Communist Manifesto). It is thus quite contrary to Marx's own ideas to call socialist theory Marxism as this is to suggest that it was the invention of some Great Thinker and would not have existed had Marx never been born. Rubel is right here and all we can say in defence of our use from time to time of the word Marxist is that we need some way of indicating our agreement with the theory first clearly formulated by Marx as a reflection of working class experience under capitalism. Rubel gets round this problem by using the adjective marxien (literally Marxian but perhaps more accurately Marxs).


But RubeIs objection is not to Marx's ideas or even to their systematisation, but to those who have called themselves Marxists, from Kautsky and the German Social Democrats to Lenin and the Bolsheviks, and Stalin, Trotsky, Mao, and the rest. In Marx Critique du Marxisme, a collection of essays he wrote between 1957 and 1973 (published together as a book in 1974), Rubel traces the origin of Marxism, as a new ism, back to Engels who, he says, after Marx's death eventually gave in to the temptation to make his lifelong friend the founder of a new theoretical school. Rubel also objects to Marxism, that is, to those who call themselves Marxists, on the grounds that they have forgotten Marx's commitment to a classless, moneyless, stateless society.


Rubel first developed his theme that there is an ethical, or moral, element in Marx's commitment to socialism in 1948 in the introduction to his Pages de Karl Marx pour une ethique socialiste (the French equivalent of the Bottomore and Rubel selection mentioned earlier and just as good).


Rubel's argument is that Marx became a socialist out of a moral objection to what money and the state were doing to human dignity, before he began his scientific study of capitalism and the working class. Historically this cannot be challenged: Marx became a socialist sometime in the winter of 1843-4 and only later interested himself in economics; Capital, written in the 1850s and 60s, was in fact not published till 1867. Although in the end Marx's motivation is really quite irrelevant (or no more relevant than the motivations of the rest of us), Rubel's work on the so-called early Marx does back up our insistence that Marx used the word socialism as we do by showing that, right from the start, Marx stood for a society without class conflict, without State power and without monetary fetishism (Pages).


Rubel is not saying that Marxs objection to capitalism was just ethical, but only that this was one element in his position. According to Rubel, Marx was both a man of science (his studies of capitalism) and a revolutionary who saw the working class having the ethical, or historical, mission to abolish capitalism and to take mankind on to socialism. Actually, apart from the use of the word ethical, Rubels position here is very similar to ours: the abolition of capitalism is not mechanically inevitable, but can only come about as a result of a conscious choice by the working class; if they don't make this choice or ethical decision, as Rubel would put it then capitalism will continue or (Rubel's view) be replaced by something worse; indeed, capitalism has continued precisely because the working class has not yet chosen to establish socialism.


This position of Rubel's leads to the same conclusion that we have reached: that the task of socialists is to make socialists, to get the working class to reject capitalism and to choose socialism. Rubel does not shrink from this conclusion and this has led to him being criticised, along with us, for educationnisme (see La Gauche communiste en Allemagne 1918-21 by Denis Authier and Jean Barrot, p. 199 on us and p. 372 on Rubel). Rubel also points out that this was Marxs position too and that Marx held that socialism could not be established unless a majority of workers had come to want and understand it:

Without the hypothesis or the premise of an acquisition of revolutionary consciousness by the victims of capitalist exploitation, the abolition of the wages system, the condition sine qua non of a socialist economy, is inconceivable for Marx (Marx critique du marxisme, p. 220).


Rubel also frequently quotes, with approval, from Engels Preface to the 1890 German edition of the Communist Manifesto:

For the ultimate triumph of the ideas set forth in the Manifesto Marx relied solely and exclusively on the intellectual development of the working class, as it necessarily had to ensue from united action and discussion.


Rubel even concedes (we say concedes since, as we shall see, he does not entirely agree with Marx here) that Marx held that the working class should take political action to end politics and the state and that one of the forms this could take was democratic electoral action:

The economic and social barbarism brought about by the capitalist mode of production cannot be abolished by a political revolution prepared, organized and led by an elite of professional revolutionaries claiming to act and think in the name and for the benefit of the exploited and alienated majority. The proletariat, formed into a class and a party under the conditions of bourgeois democracy, liberates itself in the struggle to conquer this democracy; it turns universal suffrage, which had previously been an instrument of dupery, into a means of emancipation (Marx critique du marxisme, p. 56).


As this quotation suggests, Rubel has no time for Lenin and Bolshevism; in fact when it comes to analysing Russia and the Russian revolution there is complete agreement with us. Not only does he regard Russia as state capitalist (now a fairly commonplace view) but he also talks about the myth of socialist October with regard to the Russian revolution. But let him speak for himself:

In 1917 none of the conditions needed for Russia to enter into the way to socialism were present: the economic conditions and class relationships within an essentially peasant society as well as the social weight and level of maturity of the proletariat forbade this, barring a miraculous intellectual and moral change at all levels of Russian society (pp. 140-1).


In Russia Lenin, his party and the bureaucracy took up the social role which everywhere else had fallen to the bourgeoisie, and performed it with great efficiency. And when we speak of the bourgeois revolution carried out by the Bolsheviks, we mean that this revolution took place in the closed field of capitalism and not within socialism (p. 115).


We mentioned earlier that Rubel does not agree with Marx's view that the working class could gain control of political power through universal suffrage. Referring to events since Marx's day, he wonders whether universal suffrage can still, as Marx believed (and as is our view), be converted into an instrument of emancipation. He feels that the working class has in the meantime found a new and better instrument: their own self-organisation into councils, as in Russia in 1905 and 1917, in Germany after the first world war, in Spain in 1936 as well as the so-called revolutionary trade-unionism of pre-1914 France.


Universal suffrage has not failed, however. What has failed is the reformist (Labour and Social Democrat) use of universal suffrage, but socialists have been saying this would happen ever since our foundation in 1904. For capitalism simply cannot be reformed so as to work in the interest of the wage-earning majority; as a system based on the exploitation of wage-Iabour for profits, it is constitutionally incapable of being made to do this. Therefore any government which tries, whether elected by universal suffrage or not, is bound to fail. To reject universal suffrage because reformist electoral action has failed is to throw out the baby with the bath water.


We fully understand Rubel's criticism of political parties calling themselves socialist or Marxist: their aim has been state capitalism and they have essentially only sought to exploit working class discontent with a view to coming to power and installing themselves as a new ruling class in place of the private capitalists. They have always seen the working class as playing a subordinate, following role, either as passive electors (Social Democrats) or as material to be manipulated by a vanguard party (Bolsheviks and Leninists of all hues). But how can this be held against our (and Marx's) position of working class democratic self-organisation into a political party based on socialist understanding, with a view to taking political, including electoral, action to abolish capitalism?


In theory, workers, once they had come to want and understand socialism could, we suppose, organise in some sort of workplace committees or councils; but they would be ill-advised to do so without at the same time organising politically, since this would be to invite a violent head-on clash with a state machine still controlled by the supporters of capitalism. But why take this risk when the existence of universal suffrage and limited political democracy make it unnecessary? Why not organise, democratically and without leaders, with a view to using the potential weapon that is the vote to win control of the state, so neutralising it? This is our policy based on an analysis of todays political circumstances and not on a dogmatic adherence to Marx's view. On other questions we are just as prepared to criticise Marx as Rubel is on this-which we think is, in todays circumstances, the most appropriate and most intelligent way of proceeding to establish socialism.