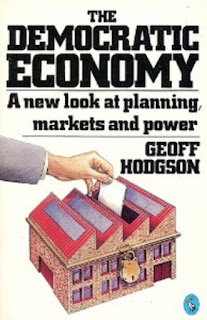 Book Review from the October 1984 issue of the Socialist Standard

It is not unusual to find that non-socialists writing on political and economic questions have interesting criticisms to make of other defenders of capitalism, but are far less impressive when setting forth their own ideas. This is the case with Hodgson.

His book begins by discussing the views of the "New Right", by which is meant Hayek, Friedman and their followers in the Thatcher government. Their attitude is that freedom is the absence of coercion and that a free market economy minimises coercion by providing freedom of choice. It is not difficult to point to absurdities in this; poverty and starvation are coercive, so workers have no freedom of choice about entering employment. The state is not the only instrument of authority and coercion: the capitalist enterprise is another. Moreover, some degree of state intervention in the economy is a necessary feature of capitalism; laissez-faire capitalism in Britain was in fact the product of deliberate state action. The goal of the New Right — a system completely regulated by the market and private enterprise — is unrealisable (and, socialists add, equally undesirable).

On the basis of this conclusion, Hodgson proposes what he called the impurity principle, which states that different economic structures must necessarily co-exist in a single society (though one structure may be dominant). Pure market capitalism with no state intervention is thus impossible. Eastern European countries show central planning co-existing with some market forces. It follows from this that "some form of structural economic pluralism" is inevitable: it needs to be decided whether markets or planning will be dominant.

And here we reach the limits of Hodgson's vision. Though he mentions in passing that socialists have often advocated the abolition of money, he has no conception of anything as revolutionary as abolition of the wages system. He wants a society based on worker participation, democracy and decentralisation, where markets still exist but are subservient to planning. This is not socialism with some elements of capitalist structure — it is capitalism period! It is not possible for socialism (a classless society based on common ownership and free access) to co-exist with capitalism (a system based on class monopoly and commodity production).

At bottom, Hodgson simply fails to understand what constitutes capitalism. He criticises Tony Benn for identifying markets with capitalism, but for the wrong reasons: he believes that markets can exist in socialism, not that capitalism can exist without a free market. His dismissal of the view that Russia is state capitalist is utterly confused, and leads him to conclude:

The theory thus transforms Marxism into a millenarian hope in an impossible scenario of simultaneous world revolution. In the meantime, 'capitalism' is everywhere.

In spite of himself, Hodgson has seen the implications of the socialist case. But he rejects it with the ignorant voice of reformism. Still, what should one expect from an advisor to Neil Kinnock?
Paul Bennett
Posted by Imposs1904 at 7:51 AM No comments:

Obituary from the May 1968 issue of the Socialist Standard

We regret to record the death at the age of 87 of Wilfred T. Hopley, one of the two oldest members of the Party. His funeral was at Tunbridge Wells Crematorium on March 12th. Hopley joined the Party just after it was formed in 1904. He was one of the best humourist writers in the Party and was a regular contributor to the Socialist Standard for many years. In fact his last contribution appeared in 1954 in the bi-centenary issue of the Standard. He wrote over the initials "W.T.H."

He helped to form the original Paddington Branch and represented it for years as a delegate to Conference and Delegate Meetings. Later he moved to Watford Branch and performed the same services for that Branch until the outbreak of the 1914-18 War. In 1925, when Alex Anderson attended his last Conference, Hopley was Chairman. Anderson was dying, and knew it, and he went on addressing the delegates for a long time in a voice like a loud whisper: one or two members urged Hopley to ask Anderson to finish, but he said it was Anderson's last chance to speak to members and he was not going to stop him. Anderson died a few weeks after the Conference.

Some time after the last war Hopley and his wife moved to a little place in Kent, not far from Tonbridge, to be near a son who was ill in hospital. Unfortunately his son died and his wife died a few years later, leaving Hopley to live alone in his house for the last nine or ten years. The other son and family lived up in the Midlands but Hopley did not want to leave the Tonbridge area.

To the very end Hopley was as lively, humorous and interested in Party progress as ever.

The Party has lost one of its staunch and solid old timbers, and some of us have lost a cheerful, optimistic and grand old comrade and friend. To his son and family we send our sincere sympathy. 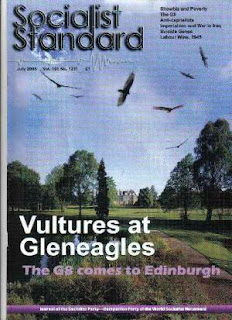 The Cooking the Books Column from the July 2005 issue of the Socialist Standard
In 1993 the European Commission proposed that the maximum time that employers could legally make their employees work should be limited, on average and including overtime, to 48 hours a week.
A quick calculation will show that, for a six-day week, this is the Eight Hour Day, a long-time trade union demand. In Capital (chapter 10 on “The Working Day”) Marx quotes a declaration from a General Congress of Labor that met in Baltimore in August 1866 that “The first and great necessity of the present, to free the labour of this country from capitalistic slavery, is the passing of a law by which eight hours shall be the normal working day in all States of the American Union”. In fact, May Day was instituted in 1889 precisely to demonstrate for this in all countries.
The Council of Ministers of the Member States of the European Union (the body that makes European laws) did not accept this proposal. While still retaining 48 hours as the maximum that employers could legally require their workers to work, they amended the draft Working Time Directive to allow countries to provide for individual workers to voluntarily waive their legal right not to work more than this. This loophole, inserted at the insistence of the UK  minister, came to be known as the “UK opt-out”. Which the then Tory government immediately took advantage of.
Since the bargaining strength of workers and employers are by no means equal this made the Directive virtually a dead letter in Britain, with employers making “voluntary” agreement to work longer a condition for being employed or promoted. As Paul Routledge explained in his column in the Daily Mirror (13 May):

“Forty per cent of UK firms exploit the opt-out – by ‘asking’ workers to sign away their rights. Many bosses require staff to accept employment contracts containing an opt-out clause, even though this is illegal. No clause, no job”.

When the Directive came up for review in May this year, the European Parliament (which is not a real parliament, more a consultative committee) voted to end the “UK opt-out”. Immediately a huge hue and cry was raised by employers’ organisations in Britain. “Freedom of choice” was at issue, said the Director General of the CBI, echoing what employers had said in the 1840s when a timid bill to limit the working day to ten hours had been introduced. It would undermine “competitiveness”, said the Director General of the British Chambers of Commerce, expressing employers’ dislike of restrictions on how long they can get their workers to work, since any limitation could mean they might have to take on more workers, so increasing their labour costs and undermining their competitive position vis-à-vis capitalist enterprises in other countries – such as China, Brazil and India where no such restrictions apply.
And what did the newly-elected Labour government have to say on this? Yes, yes, it would undermine competitiveness, we’ll fight to ensure that a maximum 48-hour week is not introduced into Britain, grovelled Industry Secretary Alan Johnston and Employment Minister Gerry Sutcliffe (both of whom had climbed the greasy pole via the trade union movement).
True to their word, they did and won. The Council of Ministers retained the opt-out. Proof if any more were needed (which it isn’t) that Labour is not even a “Labour” party.
Posted by Imposs1904 at 6:41 AM No comments: