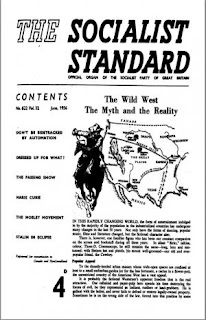 From the June 1956 issue of the Socialist Standard

In the Soviet Weekly (12:3:53), under a large photograph of the late Russian dictator, the following words were written:—

"The immortal name of STALIN will always live in the hearts of the Soviet people and all progressive mankind!"

And in a statement published on the same day as Stalin's death, by the Central Committee of the Communist Party of the Soviet Union, the Council of Ministers of the U.S.S.R. and the Presidium of the Supreme Soviet, we are told that: The heart of Jospeh Vissarionovich Stalin, comrade, in arms and continuer of genius of the cause of Lenin, wise leader and teacher of the Communist Party and the Soviet people, no longer beats." The Russian Communists, in their statement, also inform us that: "Comrade Stalin led our country to victory over Fascism during the Second World War . . . "

In his funeral oration Georgi M. Malenkov, now Soviet Minister of Power Stations, spoke of Stalin—the "Great" Stalin—as the greatest genius of mankind, the great thinker of our epoch and the greatest theoretician on national questions. And he continued:—


"The strengthening of the country's defence capacities and the consolidation of the Soviet armed forces have been the object of Comrade Stalin's tireless concern."

Malenkov then bid farewell to "our teacher and leader, our beloved friend . . . !"

After Malenkov had finished Beria, who has since been shot as a traitor and an enemy of the Soviet State, reminded those present that:—


"Our great leaders Lenin and Stalin taught us untiringly to increase and sharpen the vigilance of the Party and the people, against the designs and intrigues of the enemies of the Soviet State. We must now still further intensify our vigilance."

And they did—against the Secret Police Chief, Beria, himself!

Three Years Later
Three years after the death of the "great" Stalin, "Comrade" Khrushchev, first secretary of the Central Committee of the Communist Party of the Soviet Union, in his report to the twentieth Congress of the Party, shocked many of the "comrades" present by saying:—


"Many of the shortcomings we are now working to eliminate would never have arisen of not for the complacency that at one time gained currency in some links of the Party, and for the tendency to give a rosy picture of the real state of affairs . . .
"If Party unity was to be further consolidated and Party organisations made more active, it is necessary to reestablish the Party standards worked out by Lenin, which in the past had frequently been violated.
"It was of paramount importance to re-establish and to strengthen in every way the Leninist principle of collective . . .
"The Central Committee was concerned to develop the creative activity of Party members  . . . It vigorously condemned the cult of the individual as being alien to the spirit of Marxism-Leninism, a cult which tends to make a particular leader a hero and miracle worker and at the same time belittles the role of the Party and the masses and tends to reduce their creative effort. Currency of the cult of the individual tended to minimize the role of collective leadership in the Party, and at all times resulted in serious drawbacks in our work."

This was only the first shot against the late "leader and genius" of the Soviet Union—Joseph Stalin.


"In analyzing the economic position of present-day capitalism it is doubtful whether Stalin's well-known thesis in the 'Economic Problems of Socialism in the U.S.S.R.' can be of any help to us or is correct—in relation to the United States, Britain and France—the thesis that with the break-up of the world market the volume of production in these countries will shrink! This assertion does not explain the complex and contradictory phenomena of present-day capitalism and the fact of the growth of capitalist production in many countries after the war."

Dealing with Stalin's book 'The Short History of the Communist Party (Bolsheviks) of the Soviet Union' Mikovan says that it is inadequate and inaccurate. After attacking other books on Party History and the Civil War, he admits that "Such historical scribbling has nothing whatever in common with Marxist history."

Stalin the Terrorist
Since the termination of the twentieth Communist Party Congress in Moscow, it has been reported that Khrushchev made another—more pointed—attack on Stalin at a secret session. He is reported to have accused Stalin of making mistakes in regard to Soviet agriculture, of weakening the Russian Army prior to the Second World War by killing 5,000 Russian army officers—and of terrorism. Even Harry Pollitt, the British Communist, admits that "Stalin . . . ignored warnings about Hitler's invasion plans . . . " (Daily Worker, 24.3.56). He also admits in his first article condemning Stalin, that Stalin made serious mistakes in connection with agricultural policy, and later in his relations with Jugoslavia.

According to the Manchester Guardian (28.3.56), the first reliable report of what Mr. Khrushchev actually said about Stalin appeared in the Polish Communist Party paper Trybuna Lubu. In an article bu Jerzy Morawski, a leading Polish Communist, he says:—


" . . .  the degeneration of the security organs could, and indeed did take place. They became independent of the Party authorities and were used to consolidate the personal power of Stalin."


"Later on repression was used automatically and blindly."


"As a result many honest people were sent to prison penal camps or shot."
"Almost all the leaders and the active members of the Polish Communist Party then in the Soviet Union were arrested and sent to camps."

For many years both Socialist and non-Socialist critics of the Russian régime have said that Russia was in fact a dictatorship, that Stalin was a ruthless dictator, that the Soviet Union was a police State, that many innocent people had been thrown into slave camps, and that neither democracy nor Socialism existed there. And for as many years Communists, in all countries, have denied these allegations. Yet now, scarcely three years after Stalin's death, the Communists themselves are admitting much, if not all, of the truth about Stalin and his bloody dictatorship.

Perhaps in time more will be admitted. The Communists may even deny that Socialism exists in Russia. 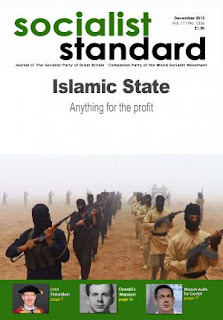