From the June 1998 issue of the Socialist Standard
Some weeks ago Radio Four broadcast a phone-in about ageism in the workplace. The subject was topical with the media at the time, several people having cited examples of how they had been turned down for a job in favour of someone younger. Consequently it was felt that employers, intent on the training (or otherwise) of younger people, whom they see as being more likely to offer them years of service, were unjust and deliberately excluded older people from employment.

In response people have come forward to declare that not only is the older person more alert than the younger person but will often possess more staying power. Now I'm sure employers everywhere will be delighted to hear some members of the working class demonstrating their willingness to be exploited, often at the expense of other workers of other ages who may not have that same urge to prove either their outstanding alertness or their indefatigable staying power. And yes, I am only too aware that the members of the working class must present themselves as attractively as possible—otherwise no money, no bread. Neither do I in any way underestimate the anguish felt by those who seek to find work and discover that age is against them. Still I cannot but hope that one day people might wake up to the fact that they are treated as only commodities, and that they are given work to do (at the right price and as long as they have what capitalism requires) even though other workers must be rejected.

So instead of entering into the debate (like lambs to the slaughter) about whether or not because one is over thirty or forty or fifty, one is all washed up, or alternatively, one is alert with much staying power, it might be more to the point if it was realised that no matter how wonderfully fitted we may be to do capitalism's work for it, there will always be, nonetheless, people of whatever age whose services will not be required. In any case the logic of the kind of reasoning which says who should have jobs and who should not, does tend to suggest that if one is female, slim and considered to be "pretty" then one might very well be a better bet to be employed as a shop assistant or a secretary, than, say, a fatter woman with a wart at the end of her nose. Capitalism has always preferred us to sort it out among ourselves; it makes the system's job so much easier.

It is not a happy experience witnessing one's fellow humans vying with each other as to whom is the most employable—the young, the old, the smart, the scruffy, and so on, in the race to be exploited. And I wonder why it does not seem to have occurred to more people that simply being human makes us natural assets to one another. That some of us may be good at this and others of us may be good at that. What more ideal situation could we have in existence for a new world where age doesn’t have to come into it because our contribution is valuable and no price be set upon it?.
Heather Ball
Posted by Imposs1904 at 9:56 AM No comments: 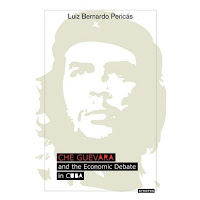 Book Review from the November 2009 issue of the Socialist Standard

Guevara’s cult status rests on the fact that he was a martyr to his cause, fighting to free the poor in the Third World from oppression and exploitation (by US imperialism). Pericás probably thinks he is enhancing Guevara’s image in describing what he did when he was a member of the Cuban government from 1959 to 1965, two years before he met his death in Bolivia. In fact he reveals what would have happened in the event of the guerrilla-led peasant insurrections that Guevara championed triumphing.

In Cuba Guevara was successively head of the National Bank and Minister of Industry. As such he played a key role in the construction of state capitalism in Cuba, even though he thought he was constructing “socialism” as a step towards the moneyless “communist” society that he seems to have genuinely wanted. According to Andrew Sinclair in Guevara, “he dreamed of the single wage-scale in which everybody would earn the same wage or would earn according to needs until money could be abolished altogether”. This may have been his longer-term dream but equal wages was not what he introduced when he was Minister of Industry.

The policy the Cuban government pursued (made all the more necessary by the US embargo) was to industrialise the country on the same sort of lines as Russia had done, putting in place the same structures: a one-party state, state enterprises, integration of the trade unions into the state. a harsh labour discipline banning strikes, imposing labour passbooks and severely punishing absenteeism. As can be seen from this book, Guevara implemented and justified all these things. Hardly freedom from oppression and exploitation. The same thing happened in Vietnam.

Pericás’s book details the discussions that went on while Guevara was a member of the Cuban government and amounts to an economic history of Cuba during this period. The translation (from Portuguese, as the author is from Brazil) is not perfect. If the author had proof-read himself he would surely have changed “mercantile production” to the more familiar “commodity production” and “good” to “commodity”.
Adam Buick
Posted by Imposs1904 at 9:42 AM No comments:

Weekly Bulletin of The Socialist Party of Great Britain 120

Welcome to the 120th of our weekly bulletins to keep you informed of changes at Socialist Party of Great Britain @ MySpace.

“I'm completely in favor of the separation of Church and State. My idea is that these two institutions screw us up enough on their own, so both of them together is certain death.” George Carlin