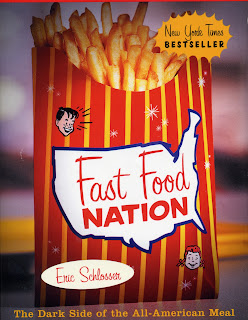 Book Review from the November 2002 issue of the Socialist Standard

You may well think that companies like McDonald's are objectionable, serving nasty junk food and disfiguring high streets across the land. But, as Eric Schlosser shows in this thoroughly-researched book, the impact of the various fast-food corporations is far greater than this, reaching into almost every aspect of daily life, and producing massive profits.

In the United States, every day a staggering 75 million people eat fast food. Within a generation, there has been a massive shift from eating at home to eating in (mainly fast-food) restaurants, reflecting the fact that many more women are now employed outside the home. This itself is tied to the steady decline in average US hourly wages (adjusted for inflation) since the early 70s. And the restaurant industry is America's largest private employer, with the greatest number of employees on the minimum wage. Workers at these companies - most of them in their teens - have few rights and benefits, learn no employable skills, are rarely able to join a union, and have little control over their job. No wonder there is such a massive turnover of staff.

The big fast-food companies spend massive amounts on advertising, and have special promotions aimed at children, from free toys with kids' meals to sponsored teaching materials in cash-starved schools. Their capital expenditures are reduced by reliance on franchising, which desperate franchisees see as an easy way to business success, even though the failure rate among franchises is far higher than other businesses. They also spend masses of money inserting flavours into the food they sell, because all the processing and freezing applied to the food removes most of its original flavour. And the food isn't even good for you, being full of fat. More than half of all American adults are obese or overweight, and this figure is increasing. One 19-stone man from New York is now suing McDonald's, KFC and others for causing his obesity: "The fast-food industry has wrecked my life. They said 100 percent beef. I thought that meant it was good for you" (Guardian, 27 August).

One of the most wide-ranging impacts of the fast-food industry is on American agriculture. The raising of chicken has already become the virtual monopoly of a small number of companies, and now beef production is going the same way. Cattle ranchers are quitting the land in droves as enormous meatpacking companies dictate prices, pushing them ever lower. The suicide rate among ranchers and farmers is three times the US average.

The American emphasis may make the book less interesting to those living elsewhere, even though fast food is now a more or less world-wide phenomenon. There is an interesting chapter on the globalisation of fast food, with an illuminating section on the former East Germany. The first McDonald's to open there was in the town of Plauen, where the new franchisees were the couple who ran the previous state-controlled food service monopoly. As Schlosser says, "Throughout the former Eastern bloc, members of the old Communist elite have had the easiest time adjusting to Western consumerism."

One of the strengths of the book is the individual case studies it contains, in addition to all the facts and figures. One example relates to a man named Kenny, who worked for the Monfort company in a meatpacking factory. While working, he was hit by a box that fell from a height. The company doctor told him he was just suffering from a pulled muscle, but in fact he needed back surgery, and was only able to return to work after fourteen months. He was transferred to another company plant, where he now had to do heavy work rather than light duties. He was exposed to chlorine while cleaning a blood tank and spent a month in hospital, his lungs having been burned. Back at work again, he broke his leg when he stepped into a hole in the factory's concrete floor, then he shattered an ankle, then had a heart attack at work. While he was recuperating from this, Monfort sacked him. To my shame, when I first read Kenny's story, I thought it was an amalgam of the experiences of a number of workers. But no, Kenny is a real person: "His heart is permanently damaged. His immune system seems shot. His back hurts, his ankle hurts, and every so often he coughs up blood. He is unable to work at any job . . . Once strong and powerfully built, he now walks with difficulty, tires easily, and feels useless, as though his life were over. He is forty-six years old."

Schlosser's own proposals are the reformist ones of tougher government standards on safety at work and the processing of food. But they are not the point of this impressive book, which tells you a great deal about the realities of life under capitalism, and of the real cost of burger with fries.