From the July 2000 issue of the Socialist Standard

Politically speaking before I applied to join the Socialist Party of Great Britain I had all but given up. Many years of my life had been spent either within or on the periphery of reformist organisations. I voted Labour and for years I marched in the columns of CND. I was a member of the Young Communist League and later the Communist Party. I became a Trotskyist and admit that to my shame I joined the Labour Party for infiltration purposes. I was twenty five years old and thought of myself as madly revolutionary. I must have been suffering from chronic amnesia. I had forgotten how excited I had been, to what extent my imagination had been fired, when at about the age of thirteen my father talked to me about a world without money.


I must have heard talk of free access when I was still in my pram. The theory was according to my father that the then Soviet Union had state capitalism but eventually the state would wither away and money would be abolished. Every day I scanned the Daily Worker to see whether the Soviet Union had turned into a moneyless society. Needless to say there was no sign of the state "withering away".


At school I embarked with zeal on my own propaganda exercise. In every essay set for us by the teachers I managed to include in mine a reference to the idea of a world without money. I was childishly optimistic about this. I was convinced that one day the English teacher's interest would be aroused and a class discussion would ensue. When this didn't immediately happen I decided to talk to my classmates about it. They thought I was nuts. Then one day a marked essay was returned to me and to my chagrin all my remarks about money had been deleted with red ink. It was a composition about the English countryside and I had waxed lyrical about the beauty of Kent. My suggestion was that if we did not have a monetary system the countryside could be even more beautiful. I supplied a few reasons for why I thought this but can no longer remember what they were. I adored my English teacher. She and I shared a love of reading but from that day on my conviction grew that she wasn't all I had cracked her up to be. I exchanged my interest in free access for boys, clothes and dancing.

I joined the SPGB in 1994. Yet I feel I have always been a member. A comrade was selling the Socialist Standard in the city and I bought a copy. My preconceptions warned me that the SPGB was just another one of those outfits like the Socialist Workers' Party. I skipped through the pages, skimmed one or two of the articles and tossed it aside. My husband asked if I had read the Declaration of Principles. I had not.

I read the Object: "The establishment of a system of society based upon the common ownership and democratic control of the means and instruments for producing and distributing wealth by and in the interest of the whole community." And I read on. That did it. SPGB, where have you been all my life? Whilst I was marching against war, agitating for better conditions in the workplace and voting for a Labour government that supported capitalism the SPGB was waiting in the wings. How had I missed it?

Every member knows that it is not easy to join the Socialist Party. It is not just a matter of filling in an application form and receiving that little red membership card through the post. I know of no other political organisation requiring potential new members to understand their aims and be capable of arguing for them. I mildly resented the twelve questions. I felt the Socialist Party should be grateful to me for wanting to join their ranks. It was rather like sitting an exam. I thought it would be a doddle. It wasn't. But goodness how it focused my mind. I do not think I made a very good job of the twelve questions but my answers must have been satisfactory enough for someone to write back and tell me I could join if I liked. There are times now when I am tempted to ask for those twelve questions again. Next time I may give a better account of myself. 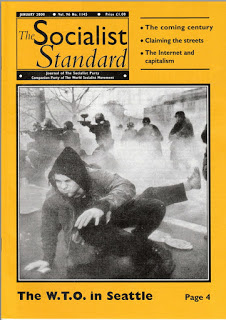 From the January 2000 issue of the Socialist Standard


There is something about the interiors of other people's houses that makes me feel uncomfortable. In about eight out of ten visits I might make to a friend's or a neighbour's home, I return to my own abode, survey my sticks of furniture, my cluttered kitchen, my shabby living quarters and make a resolution to smarten the old place up a bit, then I become absorbed in something else and that's that. Until the next time.


Other people's houses are too clean. I have never lived in a very clean house and the reason for this is that I am a woman, and therefore there is an assumption that I am solely responsible for keeping it clean. I long ago ditched the idea that I should spend every minute of my available time making sure my house is dust-free. Yet it seems to me that almost every other woman I know takes her housework seriously. Spotless, fitted kitchens as well-tended as any Intensive Care Unit in a hospital, wall-to-wall carpets likely to suffer premature balding from so much vacuuming, immaculate chairs and sofasno crumbs, no stains, no tears, and bowls of fruit as perfect as wax imitations. Perfect houseplants too. And never a book out of place. Often never a book. No piles of papers abandoned on rickety shelves (as in my house) and no vases harbouring very dead flowersbeen there for weeks, months even. In these same houses no grimy jars on dusty shelves containing this and that; all essential to the sort of alchemy that takes place in my kitchen. Here things are prepared, cooked and eaten all from scratch, and jars of what will one day be wine stand in rows to ferment for months. I could take a bet on it that the inside of my house is never going to arouse feelings of envy in any other woman or man in the world. But it hasn't always been that way.


When first married I did dust and polish and remove cobwebs from corners, but you wouldn't catch me doing that these days. Within a very short space of time I grew depressed by it all. Outside the sun shone, books were waiting to be read, life was waiting to be lived. And what was I doing?polishing a table. I became resentful. I not only went out to work, I shopped and cooked and cleaned house too. We are only willing slaves to something all the time that we are unaware. Just as soon as there is awareness then the slave-mentality is challenged.


Few of us would choose to live in a slum, but it seems to me that a fetish is made of housework. How often have I called on someone unexpectedly and been asked to "Excuse the mess." What mess? Could she mean the magazine lying on the arm of the chair? Some women immediately rush to the bathroom to pull the chain if I casually express a wish to visit the loo. And in the kitchen a well-known brand of disinfectant is at the ready in case the plague strikes suddenly.


Most women are assigned this role from birth and that is not to deny that men are assigned roles too. When living at home I did not help my mother much in the house but there was, I think, a tacit agreement on both our parts that I would one day do exactly as she did. When later I didn't I knew that she was horrified. She would run the tips of her fingers over my furniture when she thought I wasn't looking and become tight-lipped when she found dust, as she invariably did. I had challenged her role in the world as a woman. I cleaned the house, yes, but not very thoroughly and not very often. It was scandalous. What kind of a daughter was I? I tried to tell her what kind of a daughter I was. I said that when I was born nobody had announced "It's a girl. She'll clean houses." And even if they had it still didn't mean I wanted The Housewife of the Year Award. What I wanted was to live and learn and become a real person, not someone who cleaned houses because they thought it would bring respect from other people, envy even. What sort of a life was that anyway and what was enviable about it?


Mine was a mini-rebellion and you may not think of it as significant, but it seems to me that unless we question what appears to be our lot in life then we stand in darkness or at least half-shadow. In other words we accept. And when you think that there is an acceptance of war, poverty and that biggest confidence-trick of all (the cause of much misery, ignorance and injustice) money, then perhaps you will see that my objection to becoming a slave to cleaning houses is just another example of how we can escape the conditioning we each of us experience before we can throw off our chains. As the proverb saysfrom little acorns oak trees grow.
Heather Ball
Posted by Imposs1904 at 6:13 AM No comments: