How Near Is Socialism?

HOW NEAR IS SOCIALISM?

304 Maryhill Road Glasgow, G20 7YE
For over a century the objective conditions necessary for the establishment of socialism, i.e. the development of the means of production and distribution of wealth to a level which first permitted abundance and now superabundance, have existed. So, why has it not happened? When will it happen?

These questions are obviously much easier to ask than they are to answer.

Subjective Conditions, a majority of socialists.
To answer these questions, it would probably help to look at some indicators within society which might show us what progress, if any, has been made in the last century or so towards increasing socialist consciousness, and consequently towards socialism itself.

Some Indicators within society
What does the decline of belief in religious superstition during the last century tell us about the state of consciousness amongst wage slaves? Has this decline been accompanied by a correspondingly better understanding of the society in which they live? What effects do globalization and improved. communication systems, such as the internet, have upon the potential for greater class consciousness amongst workers?

Globalization is not new: it is a development which has been in progress for at least several hundred years, but its effects have become much more noticeable as a result of modern communication systems. Globalization has joined the lexicon of buzzwords used by our bosses' media machine.

What are the effects of this media machine upon the minds of the working class?

We are often told that certain events should be seen as "important", or signifi-cant", or even "historic". The recent presidential elec-tion in the United States of America was reported as such an event.

The fact that Hillary Clinton and Barack Obama were both seeking to be candidates for the presidency, we were told, was in itself an "historic achievement". Now that Barack Obama has become the new President of the United States, we are invited to see this as some kind of great event. There is much goodwill, and sadly adulation, for this latest disappointment-to-be who now occupies the White House. Will those who support this man today be ready for socialism any time soon?

For more information about Glasgow Branch of the Socialist Party, visit their website.
Posted by Imposs1904 at 6:06 AM 1 comment:

Details of the Summer School will be posted on the blog if and when I stumble across them on the SPGB website. 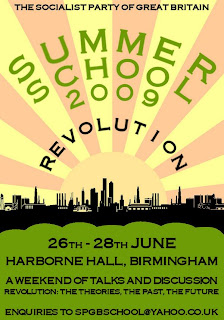 Is it just me or are you also thinking Port Sunlight?