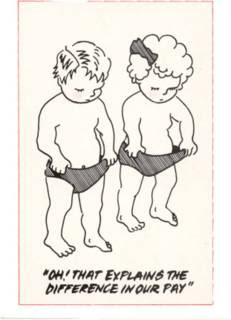 From the forthcoming October 2007 issue of the Socialist Standard

It has always seemed strange to hear of Women’s Rights as if it were a minority issue.

Isn’t it a fact that it is actually the male population which is falling behind in numbers generally around the globe? Women are certainly in the majority in being the primary carer of children, usually unpaid at that. They ’bear the burden’ of bringing up children, being the ones who take time off from work in the early years or to tend to a sick child. In addition many also care for elderly parents, juggling the various responsibilities as best they can. In most parts of the world it’s accepted that women do the bulk of the household chores in addition to any other paid or unpaid labour. As for labour, statistics show that most low-paid, part-time work is undertaken by women and that there is still a wide gap in rates of pay in certain fields - unequal pay for the same work. Also not to be ignored is the perennial difference of work opportunities between the genders because of the ongoing negative female profile. This is a meagre attempt in a short space to encapsulate some of the elements which feed the need amongst women to pursue their own separate agenda.

Now note the spring 2007 UNICEF report regarding children in ’Developed Countries’, a report which set out primarily to measure child poverty in the world’s richest countries. The results showed the UK to have "the lowest level of child well-being among 21 of the world’s richest countries." Among the factors being cited were family break-up and growth in single parent and step-families. Another report recently revealed that (whatever the government might say to the contrary) an extra 100,000 children were lowered into poverty in the last year in the UK. Ongoing economic difficulties cause stress within families. Emotional and social problems are heightened putting added strain on relationships. Economic hardship compels both parents to seek work to keep pace with financial obligations. For one-parent families (mostly mothers) there is the added burden of no one to share responsibility for taking care of the children, so they are often forced into part-time employment with the consequential reduction in pay. Then there is the category of family, with one or two parents, with or without skills, seeking work in an opportunity-lite environment, living on state benefits and therefore belonging to an underclass of ’spongers and scroungers.’ Families are also degraded through lack of time, especially quality time. Children and parents both are trapped in situations not of their own making but born of a system that has evolved to ensnare the majority, male and female, to use them for its own ends, just another commodity from which to squeeze as much profit as possible. Trapped in situations they don’t understand, don’t even recognize that they can learn to understand. Somehow they think they are, even accept being, an unchangeable, integral part of the system and believe they’re just not doing very well out of it.

Some say living standards have been gradually improving but what’s the tangible difference between today’s - say 35-45 - age group with children and the generation of their grandparents who were raising their families in the 40s and 50s? Today’s families expect to possess or to be able to acquire all contemporary mod-cons for their own centrally heated home, suitable vehicle(s), to have holidays abroad, to shower their children with the latest fads and technology and to clothe them in the latest fashion trend. And they probably expect, nay need, both parents to work. Plus, they expect to live with an enormous debt burden, juggling mortgage, car(s) and credit card payments which include most regular purchases like food and fuel as well as Christmases and holidays. In the 40s and 50s material expectations were much lower; many more households rented property than owned (ownership being a clever trick of capitalism to create an illusion of the affluent working class); more people saved up enough prior to buying goods in order to buy at cost rather than with interest although hire purchase was also popular with some; there were few vehicle-owning families amongst the workers; holidays, if taken, were more simple affairs, travelling by train or coach; debt was considerably less and the family budget ran from Friday to Friday when the pay packet - of the (mostly) single wage earner - was paid. The mothers mainly stayed at home - there wasn’t the economic pressure to earn another wage - and worked as unpaid domestics.

(Another interesting phenomenon: job opportunities for women were fewer. In two or three generations work has opened up enough to occupy the majority of both genders and just enough to ensure a large pool of necessary unemployed to keep a cap on wage increases.)

So, today’s relative affluence brings more creature comforts, more comfortable homes, more exotic holidays --- for some. The downside is more debt, more time spent travelling to work in worsening conditions, less time to spend together as a family, in a word, more stress --- for most.

And did the promised coming of technological advances, at which time there would be well-remunerated employment for all, work to be shared giving us all ample leisure time to pursue our favourite pastimes, happen yet? Or has it been and gone in the blinking of an eye?

This is one of life’s enigmas. We all know that things should be better as a result of advances in technology, science, medicine etc. etc. but many see that they are working harder and longer to remain static or even go backwards. At the same time people want the best for their children but where do they look for the opportunities? Down the same road from which they have just come! Get a good education, get a good job, get into the same old rut, just make it a bit deeper and longer!

Children are the women and men of the future, the ones who will decide the inheritance of the, as yet, unborn generations. What shall our legacy be to them, our children - the same old well-worn path to nowhere or the clear vision of another way, inclusive of majorities and minorities alike, men and women, young and old, a way to a world of free access and for the benefit] of all?