The following is from The Zinn Reader (1997, Seven Stories Press, pp 574-578) and is reprinted with the permission of the author. It has been posted on the blog on two previous occasions. 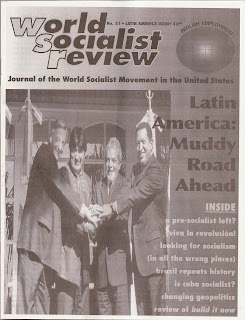 A special issue of the World Socialist Review (issue 21) which focuses on politics in Latin America is now available. Articles in this issue include:

The World Socialist Party of the United States 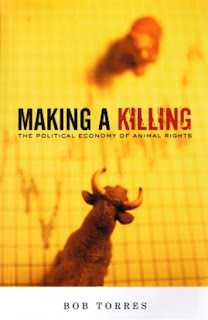 Some Socialists are vegetarians, but others are not. We have never seen a reason to take a stand on this issue as a party, however strongly some individual members may feel. In this book, though, Bob Torres makes a political case for veganism, in keeping with his support for social anarchism.

Torres begins by accepting a Marxian economic analysis of capitalism, as commodity production involving exploitation. But he then goes on to claim that animals perform unwaged labour and are super-exploited living commodities. In Marxian economics, however, they are a part of the means of production, i.e. of what Marx called “constant capital”, which does not create new value but merely transfers its value to the product. Just as slavery involved some humans being the property of others and hence treated just as means to the end of the owners, so animals are under the power of humans. They are bought and sold, kept and killed in appalling conditions, experimented on, and used to provide milk, meat and eggs. This is speciesism, he says, integrated into society as much as racism once was (though note that there are separate species with identifiable characteristics, but no distinct races).

The ‘animal rights’ movement comes in for heavy criticism. For one thing, it is dominated by large organisations that employ professional activists earning high salaries. As such, it can be co-opted by the meat and animal products industry. People for the Ethical Treatment of Animals has even given awards to someone who invented a more ‘efficient’ kind of slaughterhouse.

In contrast, Torres argues, the advocacy of animal rights needs to become part of a wider movement that challenges all hierarchy, domination and exploitation, whether of other humans, animals or nature. We do not need to eat meat or animal products in order to live, therefore we should not do so. Vegetarianism is not sufficient, since the production of both milk and eggs involves cruelty (e.g. cows must constantly be kept pregnant in order to provide milk). Veganism, which involves making no use of animal products at all, ‘must be not only the foundation and baseline of any movement to end the domination of animals, but also the daily practice of anyone who seeks to live their life free of all domination and hierarchy’.

There can be no dispute that many animals are treated abominably under capitalism. One question is to what extent their treatment is due to capitalism’s demands for profit and for constantly cheapening the costs of production. For it does not follow that mistreatment is a hallmark of all use of animals for food. It is perfectly possible that a Socialist society would involve less eating of meat and eggs, and any animals kept for food purposes would certainly be treated as humanely as possible. It’s all very well to talk about opposing all hierarchy, including that of humans over animals, but if it came to the crunch I suspect almost everyone would regard the life of a fellow human as more important than that of a non-human animal. So there can be no real equality of treatment between humans and animals.
Paul Bennett
Further Reading: