It's the same in China

Latest post from the SPGB blog, Socialism Or Your Money Back.
Posted by Imposs1904 at 10:51 PM 1 comment: 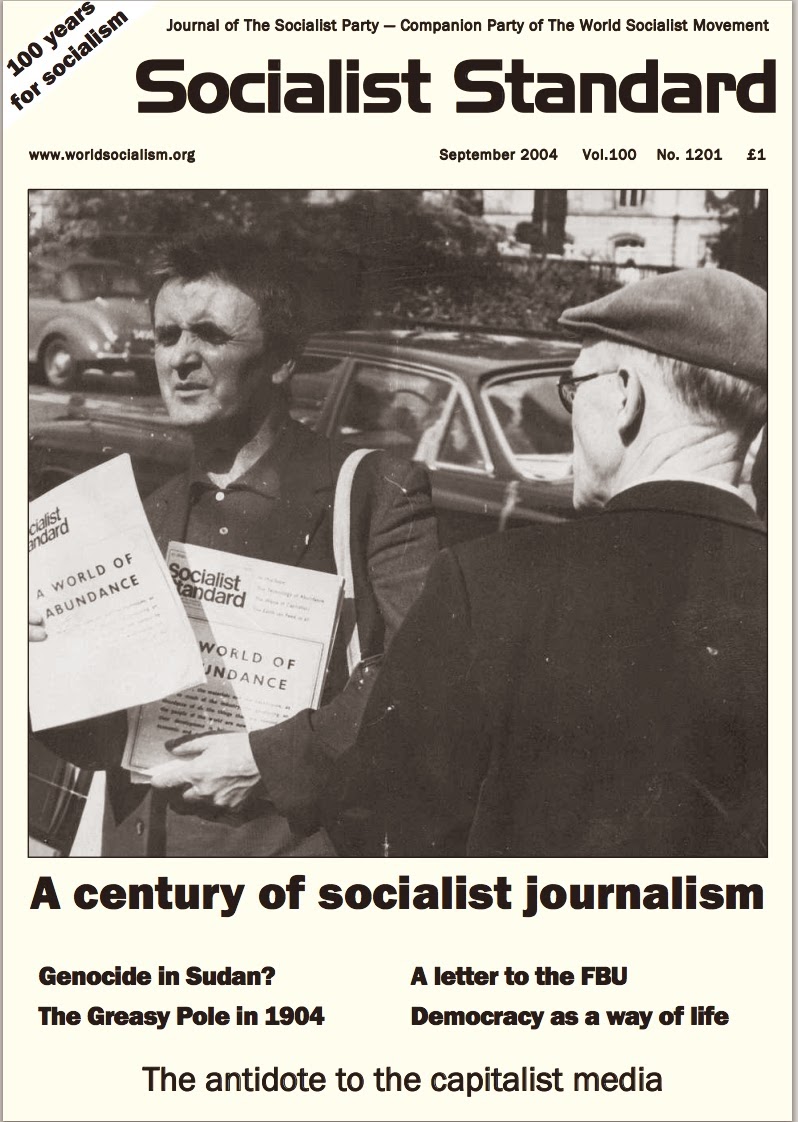 Editorial from the September 2004 issue of the Socialist Standard

On Sunday, 12 June 1904, a meeting was held at Printers' Hall, Bartlett's Passage, Fetter Lane, London. It had been called by a Provisional Committee of ten and was attended by some 140 or so people who then formed the Socialist Party of Great Britain. These were men and women who were determined to uphold socialist principles and work without diversion for a clearly defined socialist objective. As former members of the Social Democratic Federation they had become deeply dissatisfied with its increasingly reformist policies. They had also become victims of its undemocratic practices. Given their socialist analysis of problems and their commitment to organise unswervingly for a new society based on common ownership, democratic control and production solely for needs, circumstances gave them no option but to form the new party.

In September 1904, these founder members of the SPGB produced the first issue of the Socialist Standard. Its editorial began, "Having inaugurated The Socialist Party of Great Britain, we find it indispensable that we should have a journal in which our views may be expressed." We now look back on a remarkable record of monthly issues over 100 years. For over a century the Socialist Standard has met its monthly deadline without fail.

The Socialist Standard has applied a consistent socialist analysis to events and trends as they unfolded throughout the century. This set these in a clear socialist perspective, reinforcing time and again the argument that only socialism could solve the problems caused by the capitalist system. In this way the Socialist Standard has also kept alive the hopes of all people for a world of peace, well-being and happiness. This has been a great tribute to the men and women who set out on this socialist course of "sane and sound pronouncement", and of course to all those who have since taken up their example.

Although regrets at past failures of the working class to change society are of little practical use, it is both instructive and relevant to the present to recall the political arguments which were decisive in setting the 20th century on its disaster-filled course. This happened because the ideas that won the day amongst the various parties of the working class movement, at the beginning of the 20th century, held no possibility that the problems of the great majority of people could be solved.

The great reformist hope was that having won the vote, at least for working men, an elected working class government would be in political and economic control. Then, through a programme of reforms, nationalisation, measures to tax the rich out of existence and, in unity with the trades unions fighting on the industrial front, such a government would raise the living standards of all workers. Some took the view that such a programme would introduce a new socialist society.

As these ideas gained ground and went on to contribute to the founding of the Labour Party, the socialists who broke away from the Social Democratic Federation understood very well that the hopes placed in these reformist policies were illusory. They applied socialist theory in a way that gave them a full understanding of the economic limitations of political action within the capitalist system.

An article, 'A Plain Statement', in the February 1905 edition of the Socialist Standard said the following:

"The Socialist Party of Great Britain presents the plain issue. They say the ownership of a few people of the means of life is the cause of working class misery. They say the only remedy lies in the common ownership and control (ownership and control by the whole people) of these means of life. Which is socialism. Therefore we say that those who know that socialism alone is the remedy and yet make alliances with those who are not Socialists, with the object of realising certain reforms that cannot, even if realised, benefit the workers, are betraying the cause of labour. They may have the best of intentions but the result is the same. By their work they are delaying the time when the workers will see the truth and apply the remedy. To that extent they are keeping the power of the capitalist strong."

The writer could not anticipate that this would need to be repeated in the columns of the Socialist Standard throughout the next century. To say the least this has been unfortunate, but any disappointment that we may feel cannot offset the continuing truth and predictive power of what he wrote. Since then, despite social reform and the policies of Labour and Social Democratic governments the capitalist system still rules our lives. More and more people struggle to live within the wage labour/capital relationship; more people produce goods for profit. There is a greater pool of capital still being accumulated from the exploitation of workers than ever before. Capitalist states are stronger with more arms and greater powers of destruction. The capitalist system has spread as a global system. It now exists as a gigantic structure, with economic events in one place having repercussions throughout the world.

The socialists who founded the Socialist Party and its journal understood that the capitalist system operates primarily as a system of labour exploitation, profit and capital accumulation. This imposes a definite framework of economic limitations on the actions of governments, corporations and on society as a whole which cannot be evaded. The political consequences of this are immense; ultimately they shape our society. The idea that any government, however well-meaning or inspired by revolutionary sentiment, can replace profit and the accumulation of capital with the needs of the community as the objects of capitalist production is a misguided doctrine that has led to failure, broken promises and boundless political confusion. It has put back the clock of social progress and made the sound work of building the socialist movement more difficult.

There has been no worse example of this than the events that followed the Bolshevik takeover of power in Russia in 1917. Whatever may have been the revolutionary intentions that motivated these activists the Socialist Standard was very early in pointing out that in the backward economic and political conditions that existed, and particularly in the absence of a socialist working class, there was no realistic prospect for the establishment of socialism. After noting with approval the fact that having taken Russia out of the war the Bolsheviks had "stopped the slaughter", on the question of whether they had also achieved the "establishment of the social ownership of the means of life", the August 1918 Socialist Standard said:

"Unless a mental revolution such as the world has never seen before has taken place, or an economic change has occurred immensely more rapidly than history has ever recorded, the answer is 'No!'"

In July 1920 the Socialist Standard was already seeing the system in Russia as a state capitalist system. Whilst this was not denied by Lenin he nevertheless justified it. In April 1918 he said: "Only the development of state capitalism, only the painstaking establishment of accounting and control, only the strictest organisation and labour discipline, will lead us to socialism." This could not happen and it never did happen; it was unfortunate that this myth of a society advancing towards socialism captured the minds of many millions throughout the world.

The reality was that from the beginning, the Bolshevik leadership, first under Lenin, then under Stalin and later others, used every means of intimidation and terror to run a state capitalist system for their own power and personal advancement. This had countless victims and one of these was the language of socialism which was corrupted by its association with state oppression. Against this, it was left to the Socialist Standard, over the next 70 years to point out the brutal tyrannies of the Russian state-capitalist system whilst maintaining a clear idea of what socialism means.

The great and enduring contradiction of the capitalist system, which has devastating consequences on our lives and which is at the root of most of our problems, is that whilst it has developed immense powers of production, it is incapable of using them for the benefit of the whole community. By putting profits before needs, the rule of market forces, which are unpredictable in movement and direction, places the production of goods and services, on which all our lives depend, outside the control of society. Market forces serve minority interests and generate the insecurities, crises, wars and civil conflicts that shape the way we live. In line with this view that was first expressed by socialists, every government, has acted out these forces to great human cost.

The passage of time has done nothing to diminish the validity of the socialist analysis of problems. On the contrary, it has vindicated the principled stand taken by the first members of the Socialist Party in the first issue of the Socialist Standard, and by their successors in every issue since. But we do not rest on this case. When most parties prefer to erase their past actions from political debate, and to pretend that all options are new, for which they have new policies, socialists take the more sound view that we should address the failures of the past and learn from them. To be politically disconnected from experience and to not learn its lessons provides fertile ground in which false hopes can flourish and mistaken ideas can lead to more disaster; the dangers in this are immense.

Whilst the capitalist system continues, so will the socialist analysis continue to have a timeless relevance. A democratic system organised solely for needs would bring not just a sane way to live but a world-wide celebration of all that is best in being human. This could be so easily within our grasp. There is nothing in the human make-up that prevents this from becoming a reality. We are all capable of co-operating in each other's interests.

It would be tragic indeed, and it is difficult to imagine the catastrophic circumstances in which it could happen, if one hundred years hence, a Socialist Party will find it necessary to bring out a bi-centenary edition of the Socialist Standard. The way to avoid this is to join in the work of organising for socialism and bring it to success. There can be no better cause.
Posted by Imposs1904 at 11:01 AM 1 comment: