The Colossal Waste of Capitalism (1962) 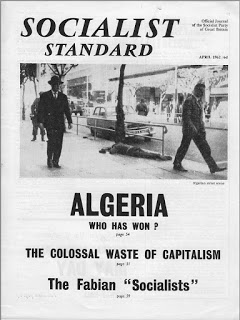 Editorial from the April 1962 issue of the Socialist Standard

"The colossal waste of capitalism.”

A phrase that for all its truth has become a cliche of the Socialist case. Words we use so often that they cease to have an impact.

We talk of the ludicrous waste of buying and selling: of the criminal waste of capitalist war and preparations for war: of the useless waste of potentially productive hands lost in clipping tickets, totting up accounts, filling in forms. But only now and again does the utter lunacy of the whole system pull us up short and make us see it as though for the first time. We are again struck with wonder at the way the human race can go on tolerating a world so out of keeping with its real needs and interests.

A recent issue of the Daily Mail told us that the launching into space of Colonel Glenn cost the staggering sum of £150 million. A few days later, a Sunday Times article stated that Britain had so far spent £700 million on rocket missiles with virtually nothing to show for it. Even greater sums must be being spent by Russia on similar ventures, yet Mr. Khrushchev has just let it be known that he hopes every Russian will be able to have an egg a day by 1980.

We have become so bemused by governments talking in astronomical figures that they lose their significance. It is only by a conscious effort that we manage to bring them back to their basic terms of houses, oil refineries, washing machines, boots and shoes, bread and butter.

In these days when families roam the streets of London looking for a night’s lodging, the £150 million spent on the Glenn circus could have built 30,000 houses (we mean houses and not the chicken coops which currently pass for them). For the same sum, five times as many homes could have been provided with good furniture to make them a pleasure to live in. Or perhaps a quarter of a million cars could have been built, or three million refrigerators, or 10 million vacuum cleaners, or a decent pair of shoes made for every adult in the country.

During the coming year, the British Government is planning to spend no less than £1,700 million on what it likes to call “defence." The United States will spend eleven times as much much and no doubt the Russians will be doing the same. Every country in the world reserves up to one-tenth of its national wealth for preparing for war. Some of the weapons they make are obsolete before they leave the factories, others even before they leave the drawing board. Many more are scrapped after only a few months service.

Probably no one will ever know the full amount that this country has spent on its atomic programme, and the expenditure of other countries is equally shrouded in secrecy. That the sums are vast is certain.

These are the millions, the hundreds of millions, the thousands of millions of pounds, dollars, roubles, francs, marks, yen. and all the other currencies one can think of, that capitalism wastes each year. And this only in misdirected production — we leave out of the reckoning all the other ways in which human labour and resources are uselessly frittered away.

Translate all this vast total of wasted wealth and labour into the worthwhile things of life and the means of producing them — into houses and brick factories, electricity and power stations, foodstuffs and agricultural machinery, clothes and textile mills, coal and oil, roads, railways, and ships.

Stop and think of this the next time you hear some glib capitalist politician talking of the millions that are going to be spent on a new rocket, a bigger tank or faster aeroplane, another atomic test. You will then have the real measure of that Socialist cliché—and of its overwhelming truth—the "colossal waste of capitalism."

Email ThisBlogThis!Share to TwitterShare to FacebookShare to Pinterest
Labels: April 1962, Editorial, Production For Use, R1962, Space Race, Waste In Capitalism Links to this post 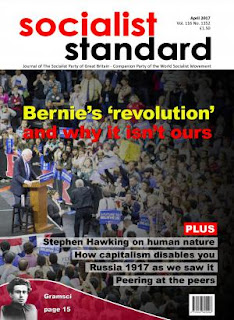 The Material World Column from the April 2017 issue of the Socialist Standard
In response to the looming food crisis the Socialist Party is asked how we would go about dealing with the doubling of food production to feed a future global population of 10 billion which the UN predicts will be necessary by 2050. Many press us to promote vegetarian diets and organic agriculture methods as the key and become disgruntled when we do not make it party policy and commit ourselves to such a view. However, it cannot be for the few socialists that there currently are to usurp the democracy of those who have the task of implementing socialism around the planet, by decreeing what is an acceptable solution to a social problem and what is not.
In the world today we can produce sufficient for all to eat heartily and healthily but many people still go hungry. The problem is not in production of enough food or in the choice of what our farms produce but in the distribution of food. That is a political and not a technical issue. Our argument is that if you project present-day capitalist society into the future then there could well be widespread starvation and all the scientific or ecological proposals will merely mitigate the suffering to come. The workers who grow and harvest a cornucopia of crops live in a constant crisis of poverty, malnutrition and homelessness.
When the time comes, socialist communities will heed the recommendations of the experts in the field. These, too, will be free from the constraints of capitalism to offer informed opinion. We are well acquainted with the arguments for organic farming but, for the time being, farming is a business and like all businesses, the goal is to maximise profits.
Cereals such as corn, rice and wheat – usually grown with huge amounts of chemical fertiliser – account for half of the calories consumed by humanity. In agriculture, more than 100 million tonnes of chemical fertiliser is used globally every year, applied to about 60 percent of all agricultural crops. Synthetic fertilisers boost yields, but they contain or generate chemicals – ammonia, nitrates, methane and carbon dioxide, among others – that contribute to global warming, a report in the journal Nature Plants has explained. Nitrate-rich run-off from industrial-scale agriculture also damages lakes, rivers and coastal waters around the world, in some cases creating so-called 'dead zones'.

'A key part of this challenge is resolving the major conflict embedded in an agri-food system whose primary purpose is to make money, not to provide sustainable global food security,' the study said. The study's senior author, Peter Horton, chief research advisor to the Grantham Centre for Sustainable Futures, explained: 'Profits for farmers and retailers rely on highly productive crops – which require lots of relatively cheap fertilizer. However the environmental impact of this fertilizer is not costed within the system and so there are currently no real incentives to fix things. Feeding seven billion people fairly and sustainably is therefore not only a question of technology but also one of political economy.'


Even the assumption that food production must double by 2050 to feed the world’s growing population may well be inaccurate, according to some research. A study in Bioscience suggests production likely would need to increase between 25 percent and 70 percent to meet 2050 food demand. An analysis by Mitch Hunter, a doctoral student in agronomy in Penn State’s College of Agricultural Sciences, says that production needs to keep increasing, but not as fast as many have claimed. Despite increased discussion of sustainability in agriculture, the suggestion that we need to drastically increase food production is seldom challenged in agricultural circles.
According to Hunter, 'in the coming decades, agriculture will be called upon to both feed people and ensure a healthy environment . . . Right now, the narrative in agriculture is really out of balance, with compelling goals for food production but no clear sense of the progress we need to make on the environment. To double food production, we would have to increase global agricultural output faster than we ever have before, and we are at a point in the developed world where we already are pushing our farming systems to the max. We don’t know how to double yields in these systems, especially without multiplying our environmental impacts'.
The difficulty of feeding the world's population isn't growing the food. It is the economic system we all live under. Within the 'no money, no food' capitalist view, hunger prevails in a world of abundance. In socialism, where the wealth will be shared by all but owned by none, the producers would not be trying to make an independent living for themselves but would be carrying out a particular function on behalf of the community where the aim of production would be to satisfy needs on a sustainable basis. This does not have to be a ‘one size fits all’ solution since socialism need not be exactly the same everywhere and at all times, though plainly its basic principles will not vary.
ALJO