A correspondent sends the following letter of enquiry:—

Will you please tell me, through the "S.S.," and not by the post, how long is the Socialist Party of Great Britain becoming theatrical?

For some months past the members of your Party, in Victoria Park, on Sunday, have now taken to wearing red shirts, so the indication of a class conscious men will, in the near future, be determined by the colour of his shirt, and not the state of his upper story.

On Monday evening last, I attended a "debate" at Ridley Road between a member of the Communist [Party] and another of your party. Wonder of wonders, —the Communist was wearing a white shirt and collar and a green tie, and your representative was wearing a red shirt. Various members in the crowd, within my hearing, passed remarks about it.

I have been interested in Socialism nearly all my life. Nearly thirty years ago I first listened to Fitzgerald and Anderson at our local meeting place, but not once have I seen them in red shirts or "Bread or Work" banners.

If red shirts stood for anything intelligent it would not be so bad, but it is a latter-day stunt of a so-called Communist Party, and to it the red shirts should be confined. There is no room in a class conscious party for theatricals. It is pure and simple  an advocacy of a physical encounter with the Capitalist class.
Yours for Socialism,
W. J. Palmer

Reply.
Our correspondent bases his question on an implication which is not in accordance with the facts. He writes: "For some months past the members of your Party in Victoria Park on Sunday have now taken to wearing red shirts . . . "

We can therefore assure our correspondent that the S.P.G.B. has not changed its view that membership of the Socialist Party must be based on the understanding and acceptance of Socialist principles. The S.P.G.B. has not adopted red shirts or any kind of uniform. If individual members of the S.P.G.B. happen to have shirts and ties which are red in colour, that has no significance whatever, any more than the fact that other members wear blue shirts, grey shirts, or shirts of any other colour or mixture of colours.

We assure our correspondent that the S.P.G.B. is not deserting Socialist principles for theatrical display. We would also draw his attention to the significant fact that he nowhere suggests that the individuals he saw in red shirts (including the S.P.G.B. representative in debate) departed in the slightest degree from the enunciation of Socialist principles. If he ever finds members of the S.P.G.B. doing so he will have reason to criticise. Until that happens our correspondent has no ground for his suggestion that such a departure has occurred merely because he sees a shirt of some particular colour.
ED. COMM.

Email ThisBlogThis!Share to TwitterShare to FacebookShare to Pinterest
Labels: December 1933, Letters to the Editor, Outdoor Speaking, R1933 Links to this post 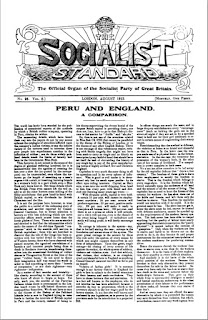 Book Review from the August 1912 issue of the Socialist Standard

"We dedicate this little book to H. M. Hyndman, Robert Blatchford, and Keir Hardie, who can give this country a Socialist party tomorrow, if they care to lead the way. If our leaders will not lead, then to the rank and file, who are getting ready to go forward without them."

The above is from the fly-leaf of "The Problem of Parliament," the work in which Victor Grayson appealed for unity between the various parties which have been pretending to teach Socialism to the working class. In that work he repeatedly shows that there is no distinction between the glorified capitalism of the Fabian Society and his own conception of a new order. Socialism, he says, is "merely another and better form of government . . . The ruling of a State or municipality is the highest form of industry and commerce, and must be put in the hands of the most experienced and highly trained men of business who can be discovered. . . .  Control by expert officials . . . that is the ideal before Socialists."

On almost every page the idea is in evidence that we find on the fly-leaf. The leaders must show the way. The "Intellectuals" must "fire the people with a desire for reform." If they don't—well, Grayson says the rank and file are preparing to go forward without them. That is the one thing dreaded by the ruling class; an intelligent working class without leaders. The latter, too, object to any scheme in which they do not figure conspicuously. Leaders, therefore, become identified with the ruling class—their interests are identical and in opposition to the working class, which can never be free, even in thought, while it submits to leaders.

The Fabians, I.L.P., S.D.P., and Clarionettes all teach the same dogma to the workers. The B.S.P. has endorsed it by assimilating those who previously held it. They fail completely to substantiate their claim that they possess the qualities necessary to leadership.

When common-sense examines their utterances or their efforts at construction, they are discovered to be not even smart enough to avoid contradiction, not brilliant enough to cover up their inconsistencies, not sufficiently intelligent—or cunning—to obscure their indefiniteness either in object, principles, or methods.

Directly the B.S.P., without principles or constitution, begins to take action on the political field, its looseness of organisation must become evident, not only to its own rank and file, but also to outsiders.

The party at its formation, and on other occasions (including the conference), has said that its object is "Socialism, nothing less." A single object, and that Socialism definitely expressed should, they imagine, place them above suspicion. But apparently the possession of a single object does not prevent them having others—many others, in fact.

Free Maintenance of Children, the Co-operative Organisation of Unemployed Labour, the MinimumWage in All Industries, and the Eight Hours Law, were mentioned as some by Mr. Hyndman, and agreed to by those present. These evidently do not offer sufficient scope for the ambitious leader; so the conference declared in favour of Proportional Representation, Adult Suffrage, Payment of Election Expenses, the Initiation and Referendum, Single Chamber Legislature, and the Substitution of a Committee Representative of all Parties for the Present Cabinet—also in favour of Home Rule for Ireland.

Yet all the prominent leaders who were present at the conference, and who gave their sanction and blessing, have at different times themselves shown the fallacy of reforms, when describing how working-class conditions worsen, sometimes in spite of them, often because of them.

An organisation which claims at the outset to be revolutionary must be badly led indeed when its revolutionary object—the only excuse it can advance for its nominal separation from the Labour Party—becomes secondary or ultimate; has to wait while something else is done first. Socialism, they say in effect, is the only object of the party: let's make sure of Home Rule for Ireland and other things.

Reforms and revolution are mutually contradictory. Said Mr. Hyndman: "We are face to face with a system which is impossible of reform. Moreover, they confuse the issue." To dally with reforms is therefore to set up by far the most serious opposition to revolution. That section of the workers who have become disgusted with the sickly. frightened attitude and open compromise of Labour M.P.s, are caught up in the new party that makes revolution its first pious expression of principle, and then proceeds to place it in the lumber room of forgotten things, by dragging into the field of discussion the freak like measures of ambitious and hysterical politicians—non-essentials so far as the workers are concerned—things that do not matter.

The B.S.P. gives even greater latitude—if that were possible—than does the I.L.P. Every member has taken with him into the new party the nostrums on which he has relied for popularity. Inclusion of the trickster means acceptance of his tricks. The policy of the party can only be obtained by totting up the idiosyncracies of its leaders. Grayson's contribution, for instance, broken bottles for strikers, getting kidnapped when something special is expected of him, calling himself a Socialist—as he did at Colne Valley—and running on a Liberal Programme. Blatchford can advocate "the buying out of the capitalist class—by the working class—but not at fancy prices" or appeal to the workers to "stand up for their country (!) right or wrong," in time of war. Hyndman can run an election on Home Rule, one chamber rule, reversal of the Osborne judgement, or any of the numerous "stepping-stones" on which he tried to climb into Parliament, but which he calls "stepping-stones to Socialism." Quelch will be free to unfurl the banner of the citizen army. probably claiming as a first contingent the results of the "great propaganda effort" outlined by the Executive for the enrollment of a million Socialists. It is rumoured also that Mr. Jesse Collings is likely to apply for membership, with his "three acres and a cow"; but even without this addition the B.S.P. is entitled to the appellation of the Labour Party—"a queer lot."

This little band of disappointed pilgrims of St. Stephen's have embodied in a single resolution, purporting to be their attitude toward industrial organisations, sufficient evidence to prove their incapacity to lead, their readiness to compromise and confuse, and their inability to cover up their clumsy attempts to curry favour with every section of those organised industrially.

They are prepared to give their sympathy and support in the conduct any struggles in which trade unions may be engaged, or in the task of consolidating, federating, or amalgamating their forces. It evidently does not matter which. They extend their blessing to those who believe that industrial organisations, primarily concerned with haggling over the price of labour-power, and latterly building up funds to keep their members off capitalist rates, are necessary as a framework on which to construct a co-operative commonwealth.

They say it is their duty to bring the workers together as class-conscious trade unionists—whatever they may be—and Socialists, so that, with the existing trade unions, they will "absolutely control by their labour the entire industry of the country." By this time we should be justified in assuming that the working class had got all they wanted. No so, however. The control of industry by Labour is merely subsidiary to the "main function of the party," which is expressed in the same resolution as: "The organisation of an independent political party of the working class, aiming at the conquest of political power by that class, as the political expression of the working-class movement, and as a means to its final emancipation."

Surely no worker with ordinary sense and discrimination can fail to discover in this obsequious truckling to the mistaken beliefs of so many different sections, the real object of the B.S.P. leaders—to obtain a following in order that they may sell them. Parliamentary seats and suchlike rewards only go those who lead successfully. If the discontented ones would succeed they must find something less transparent than this—most important of the resolutions passed at their first conference.

The intrigues and conspiracies of political-cum-Syndicalist, whether transparent or dexterous, should impose upon no one. The fallacy of reforms and the suffering that goes with so-called economic action—without corresponding gain—becomes very day more apparent. Socialism has long ago reached that stage where there is no longer any excuse for confusion. The revolutionary object, the principles upon which alone all workers can find a common platform, together with the method, are dictated as well by science and history as by common sense. Those who understand cannot spare the time to discriminate between the ignorant leader and the unscrupulous adventurer—the effect of both is confusion. Our task is to make Socialism clear to the workers, and we shall persevere with that task until the game of the leaders is played out—until there is no one to lead, because "the rank and file are ready to go forward of themselves."