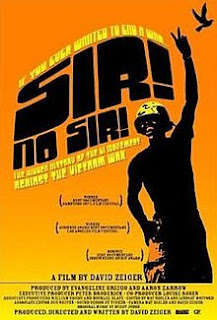 DVD Review of Sir! No Sir! from the March 2007 Socialist Standard

David Zeigler's documentary Sir! No Sir! looks back on the movement within the military to end the Vietnam War, interviewing a wide range of soldiers who participated in the anti-war movement while in uniform or after returning from Vietnam This important history was subsequently forgotten, or more precisely, buried under an onslaught of myths created by the US ruling class.

The revised, Government-approved version of events is symbolized by the image of a shaggy hippy (usually a woman) spitting on a GI who has just stepped off a plane returning from Vietnam, and then calling him a baby killer. Never mind the fact, as the author of the book Spitting Image points out in the film, that this is a complete and utter fiction. But it is an effective lie, which sets the student and "middle-class" protestors on one side, and the hard-hat workers and working class soldiers who supposedly supported the war, on the other.

Back in reality, the film shows how opposition to the war within the military gradually emerges, first as isolated acts of individuals morally opposed to the war. At this early point there is no movement to speak of and the anti-war soldiers are often astounded to discover that many other soldiers support their stance against the war. As the GI-led anti-war movement grows, "underground" newspapers begin appearing on military bases, written and produced by radical soldiers, and the officers' heavy-handed crackdown on this spread of ideas only sparks greater interest. We see how so-called "GI coffee houses" spring up near the bases, offering soldiers anti-war literature and the chance to discuss the war.

The director himself worked as an organizer at one such coffee house outside of Fort Hood in Texas. But he made the film not as an exercise in nostalgia, but to set the historical record straight and provide lessons to the current GI movement against the Iraq and Afghanistan wars. Already capitalists are expressing concern that the army is being "broken" in the war in these wars, which refers not only to the wearing down of equipment, but the wearing out of morale.

We know from historical experience, though, that even if today's wars are brought to an end, there is no guarantee that these soldier's children will not be stuck in another military adventure twenty years later. This is the bitter experience of no small number of Vietnam War veterans! In this sense, the true anti-war movement, rather than an anti-this-war movement, is the movement to replace the war-generating capitalist system with socialism.

The film does, however, end up providing socialists with a great deal of encouragement. It shows us that the capitalist class is not half as fearsome as it would have us imagine when its foot soldiers are entertaining second thoughts about war. So imagine the position of this class, this tiny minority, when the bulk of workers, soldiers included, want an end to capitalism and have a good idea of the sort of society that will replace it. Sir! No Sir! gives us a glimpse of the day when the capitalists will be frustrated generals without an army.