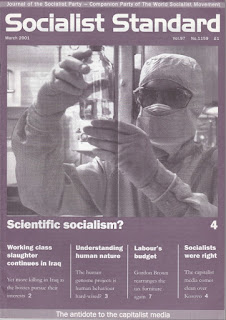 Editorial from the March 2001 issue of the Socialist Standard

Socialists have long maintained, on the basis of the findings of anthropology, that human behaviour is socially, not biologically, determined. In other words, that how we behave is not "innate" or governed by our "instincts" or our genes, but can and does vary depending on the sort of society we were brought up in and live in.

Until the end of the 1970s this was the widely accepted view in academic circles—and was, in fact, the scientific basis for our view—and still largely is amongst anthropologists. But, with the end of the post-war boom and the reaction against reformism exemplified by Reagan and Thatcher, theories of biological determinism (discredited by the defeat of Nazi Germany) began to creep back. Its advocates were able to rely on advances in genetics to give their theories a veneer of scientific plausibility. The media, and ideologists who were not merely anti-socialist but anti even trying to reform capitalism, echoed their views; to such an extent that, to tell the truth, they were able to seize the intellectual initiative and to put socialists on the defensive, charging us with basing our theories on the "discredited" views of well-meaning but woolly-minded cultural anthropologists.

It was thus with confidence that they awaited the results of the human genome project. This, they thought, would bring the hard evidence to back their theory that our behaviour as an animal species was governed by our genes much more than by our social upbringing and environment, and that our brains were hard-wired and designed for life in the Stone Age conditions under which we first evolved. The results, released in the middle of last month, came as a shock to them, and as a surprise to the media who had naively believed their speculations about a gene for everything.

Dr Craig Venter, President and chief scientific officer of Celera Genomics (the private firm that wants to patent genes for profit and thus not someone to be suspected of anti-capitalist or pro-socialist leanings) declared in the official press release issued by the journal Science (www.sciencemag.org) which published his firm's results in its 16 February issue:


"There are many surprises from this first look at our genetic code that have important implications for humanity. Since the June 26, 2000 announcement our understanding of the human genome has changed in the most fundamental ways. The small number of genes—30,000 instead of 140,000—supports the notion that we are not hard-wired. We now know that the notion that one gene leads to one protein and perhaps one disease is false. One gene leads to many different products and those products—proteins—can change dramatically after they are produced. We know that regions of the genome that are not genes may be the key to the complexity we see in humans. We now know that the environment acting on these biological steps may be key in making us what we are. Likewise the remarkably small number of genetic variations that occur in genes again suggest a significant role for environmental influences in developing each of our uniqueness."

In a pre-publication press conference, he said: "The wonderful diversity of the human species is not hard-wired in our genetic code. Our environments are crucial."

In an interview a couple of days later he was less diplomatic in his condemnation of the genetic determinists for having misled people:


"The fruit fly genome has 13,000 genes and everyone thought that because humans are so much bigger and smarter, we should have a lot more. If you think we are hard-wired—that everything is deterministic—there should be a lot of genes because we have a lot of traits. This makes me as a scientist both laugh and cry. I laugh at the absurdity of it and I want to cry because it is accepted as fact by so much of society. But we are not hard-wired" (Daily Telegraph, 14 February).


Another scientist, Svante Pääbo, of the Max Planck Institute Evolutionary Anthropology in Leipzig, made the same point in another article in the same issue of Science:


"The successes of medical genetics and genomics during the last decade have resulted in a sharp shift toward an almost completely genetic view of ourselves. I find it striking that 10 years ago, a geneticist had to defend the idea that not only the environment but genes shape human development. Today, one feels compelled to stress that there is a large environmental component to common diseases, behavior, and personality traits! There is an insidious tendency to look to our genes for most aspects of our "humanness", and to forget that the genome is but an internal scaffold for our existence."

Others queued up to ram home the same point:


"The suggestion is that nurture rather than nature may be more important in human make-up than previously thought. Ari Patrinos, of the US Department of Energy, which funded one group of researchers, said: 'There are very, very few traits or diseases that are caused by a single gene. 'It's been an emerging consciousness over the past five years, and recognition that our genes don't control everything'."
"The findings suggest that the human body is set up to adapt to its environment, by cutting up and recombining the protein 'products' of genes to make a protein suitable for the circumstance." "The researchers also concluded that the human genome had come to do much more than it could possibly have been designed to" (Scotsman, 12 February).

What this means is that genetics has confirmed the findings of cultural anthropology that human behaviour is not biologically determined and that the main characteristic of us humans that distinguishes us from other animals is the capacity, as a species, to engage in a great variety of behaviours. This versatility and flexibility when it comes to behaviour has a biological basis of course. Now biology itself has begun to discover in more detail exactly what this is and how it works. It's a great advance in our understanding of "human nature". 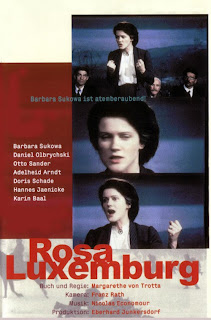 Film Review from the May 1987 issue of the Socialist Standard

For someone like myself who rates Rosa Luxemburg among the great socialist theorists, to go and see a film about her life was to take a risk. The risk was that the director would attempt to present a glossy, Hollywood version of the "life of a great woman", devoid of political content - the fate of Reds, the film version of the book, Ten Days That Shook The World, about an American's experiences during the Bolshevik revolution of 1917.

But Margarethe von Trotta's film, Rosa Luxemburg, is a sensitive portrayal that succeeds in bringing together the personal and the political, giving some insight into Luxemburg's politics as well as the woman herself. Most importantly the film doesn't trivialise her politics; they are at all times centre-stage even when we witness the Social Democratic Party's (SPD) New Year celebrations at the turn of the century and are presented with Karl Kautsky wearing a false nose. The optimism of the socialists at that party, that the 20th century would see the dawning of a new socialist era, was short-lived. It was crushed by the insanity of the first world war and the defeat within the international socialist movement of the ideas of democratic socialism by reformists on the one hand and vanguardists on the other. In many ways we are, today, still trying to overcome the legacy of that defeat.

Those unfamiliar with the debate that took place within the SPD, between revolutionary socialists like Luxemburg and the revisionists, led by Bernstein, who were willing to compromise socialism for short-term political power achieved on the basis of a reformist programme, are unlikely to have learnt very much from the film. The theoretical issues are sketched in with broad brush-strokes and very little detail. Instead it focuses on the effects of the first world war which led to those who called themselves socialists urging (in Luxemburg's words) "workers of the world to unite in peace and slit each other's throats in war". While many SPD members supported Germany's war effort, Luxemburg continued to speak out against nationalism and a war fought to protect the interests of the capitalist class which entailed the futile massacre of workers by workers. She endured one of nine terms as a political prisoner for her pains.

After the war Luxemburg continued to speak out against senseless violence when she opposed attempts to get socialism through insurrection. She recognised that just as it is impossible to have socialism in one city, in this case Berlin, it is also impossible for there to be socialism without there being a majority of socialists to make it work. So for sincere and committed socialists to engage in bloody street-fighting in the name of socialist revolution was not only futile but likely to produce a reaction. In Rosa Luxemburg's case the reaction came in the form of a knock on the head by a soldier's butt, a bullet at close range and the unceremonious dumping of her body off a bridge into a river.

Perhaps the greatest strength of this is the fact that it portrays Luxemburg not as a superwoman or heroine but as a woman who, despite her sharp intellect and skills as a political writer and speaker, is also only too human. Often beset with doubts and fears, she had also to come to terms with the contradictions and sacrifices that her political commitment entailed for her personal and emotional life. She was a woman who was devoted to the cause of socialism and yet could still be loving and jealous by turns; a loyal friend to other women in the socialist movement like Clara Zetkin and Luise Kautsky; a woman who, despite her ability to hold the attention of the crowds who attended the meetings she addressed, confessed to feeling happier communing with nature than making political speeches; a woman, who despite everything chose politics when her lover. Leo Jogiches, told her that she had to choose between being a mother and a revolutionary.

Although this film doesn't try to make Rosa Luxemburg into a heroine, it nevertheless shows her to have been an extraordinary woman. My fears about going to see it were totally ill-founded. It is a film both moving and inspiring.
Janie Percy-Smith
Posted by Imposs1904 at 9:31 AM No comments: