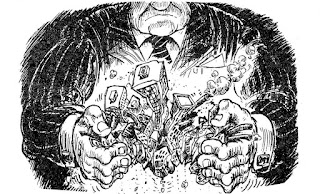 From the January 1995 issue of the Socialist Standard

The title of this article is taken from the book of the same name by the psychologist, Erich Fromm. It is probably true to state that many Socialist Party members view psychology with some suspicion because of its tendency to see “abnormal” human behaviour in isolation; but Fromm is in no doubt that it is our sick society that leads to such behaviour, and not the reverse. Thus, his ideas are worthy of study by socialists.

Fromm commences To Have Or To Be by stating that the failure of capitalism, aside from its economic contradictions lies in its two main premises:


“The first is ‘that the aim of life is happiness, defined as the satisfaction of any desire or subjective need a person may feel (radical hedonism) “;
The second is ‘that egotism, selfishness, and greed, as the system needs to generate them in order to function, leads to harmony and peace.'”

With regard to the first premise, Fromm distinguishes between subjectively felt needs (desires) whose satisfaction leads to momentary pleasure, and objectively valid needs that are rooted in human nature, and whose realisation is conducive to human growth which produces “well-being”.

Fromm notes the contradiction between the concept of unlimited pleasure and the ideal of disciplined work, and between an obsessional work ethic and the ideal of complete laziness. “Both contradictory attitudes”, we are told, “correspond to an economic necessity; twentieth-century capitalism is based on maximal consumption of the goods and services produced as well as on routinised teamwork”.

Fromm sums up the first section by stating that “… (the) pursuit of happiness does not produce well-being”. We are a society of notoriously unhappy people lonely, anxious, depressed, destructive, dependent – people who are glad when we have killed the time we are trying so hard to save!

The second psychological premise of capitalism, that the pursuit of individual egoism leads to harmony and peace, is equally rejected by Fromm. To be an egoist means:


“I want everything for myself that possessing, not sharing, gives me pleasure; that I must become greedy because if my aim is having, I am more the more I have. “
"I can never be satisfied, because there is no end to my wishes: I must be envious of those who have more and afraid of those who have less. “

Fromm is in no doubt that the passion for having must lead to never-ending class war and, in global terms, international war. He states that “Greed and peace preclude each other”. He is also in no doubt that the development of an economic system as an autonomous entity, independent of human needs and human will, is a recent development. The question, therefore, is no longer “What is good for Man?” but “What is good for the system?” – and the assumption is that the latter is good for the former.

And this assumption is bolstered by the further assumption:

Societies in which egotism, selfishness and greed did not exist, were supposed to be “primitive” and their inhabitants “childlike”. People refused to recognise that their traits were not natural drives that caused industrial society to exist, but that they were the products of social circumstances.

Fromm reinforces his assertion with the little-known, but surprising, fact that the majority of the world’s languages have no word for “to have”. Such languages express possession in the form “it is to me”, whilst others have only developed the construction “I have” at a much later date. “This fact”, argues Fromm, “suggests that the word for ‘to have’ develops in connection with the development of private property, while it is absent in societies with predominantly functional property; that is, possession for use”. And “While private property is supposed to be natural and a universal category, it is in fact an exception rather than the rule if we consider the whole of human history.”

Thus, for Fromm, the difference between “being” and “having” is between a society centred around persons and one centred around things such as property, profit and power. The distinction is between “I have knowledge” and “I know” – where “knowing” means to “see reality in all its nakedness”.

Fromm therefore concludes that the character traits engendered by our socio-economic system are pathogenic, and produce sick people and a sick society. Given that fact, we are headed for an economic catastrophe unless we change our social system. The physical survival of the human race depends on it.