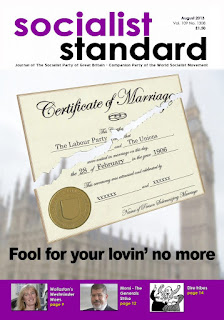 Editorial from the August 2013 issue of the Socialist Standard


Trade unions are organisations of the working class established to improve and defend their pay and conditions of work in capitalism although they are limited in what they can achieve for their members. Unions arise out of the wage-relation that is at the basis of capitalism where the working class are forced to sell their mental and physical energies in order to live. Unions exert collective pressure on employers to prevent their members’ wages falling below the value of their labour-power. It is a way of ensuring that they are paid the full value of what they have to sell and can ensure that wages are not reduced below the subsistence level.

Strikes are necessary if the working class are to prevent themselves from being driven into the ground by the never-satisfied demands of profit. The strike is one of the working class weapons that can limit the aims of the capitalist class. We should not deceive ourselves into believing that joining a union or going on strike will free us from exploitation. This does not mean that the working class should sit back and do nothing. Within capitalism the trade union struggle over wages and conditions must go on but the real struggle is to take over the means of wealth production and distribution.

Some on the Left expect unions to act in a revolutionary way with non-revolutionary members but members of the working class who will not vote for socialism will not strike for it. The National Shop Stewards Network call for a 24-hour General Strike against the present capitalist austerity: 'If the TUC and the Trade Unions named the date for a 24 hour general strike or co-ordinated strike ballots on the pay freeze alone, it would be hugely popular with all those facing these brutal cuts.' It might be popular but would it be effective? In any event, the unions can’t overthrow capitalism.

To get socialism requires a class conscious working class democratically capturing state power to prevent that power being used against them. We do not criticise the unions for not being revolutionary, but we do criticise them when they depart from the principle of an antagonism of interests between working class and the capitalist class, when they collaborate with the capitalist class, the state or political parties.

The Socialist Party declares that the working class need to capture the political machine and wrest political supremacy from the capitalist class before they can establish socialism. It is our job as socialists to stand with the working class in their necessary battles to defend themselves but we point out at all times that the real victory to be achieved is the abolition of the wages system. 'Instead of the conservative motto: 'A fair day's wage for a fair day's work!' they ought to inscribe on their banner the revolutionary watchword: 'Abolition of the wages system!'
Posted by Imposs1904 at 10:44 AM No comments: