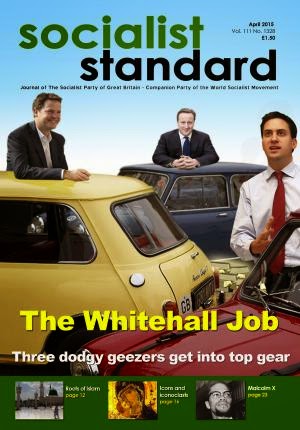 Email ThisBlogThis!Share to TwitterShare to FacebookShare to Pinterest
Labels: Andy Matthews, April 2015, Food, R2015, The Politics of Food Links to this post 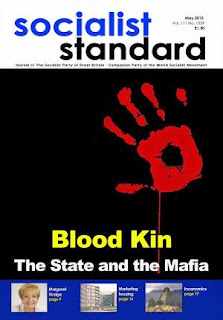 'WE DON'T NEED CASH. LET'S ABOLISH IT OUTRIGHT' was the perhaps surprising headline of an article in the Times (24 March) by Ed Conway, the economics editor of Sky News. His argument was that the continuing use of cash is negating the policy of governments and central banks of trying to control the economy by varying interest rates.
The theory behind this policy is that if interest rates go up people will be encouraged to save, and 'if a recession strikes, down go interest rates, and, in theory, everyone goes out and spends.' Leaving aside the fact that this mistakenly assumes that an economic recovery can be consumer-led whereas it has to be profit-led, interest rates are now so low that this theory, even on its own assumptions, is not working.
As the rise in the general price level has virtually stopped in the Eurozone, and has even fallen, the European Central Bank has resorted to negative interest rates. The rate is now minus 0.2 percent. The aim is still to encourage spending. But it hasn't. What it has done, according to Conway, is encourage people to keep their savings in cash rather than deposit them in a bank. Even banks are not depositing their cash with the Bank of England as they normally do but 'are stacking it away on pallets in warehouses under lock and key.' If you do this you don't get any interest of course, but at least it avoids you having to pay 'negative interest'.
Conway's solution is to abolish cash altogether so as to prevent people and banks doing this with the result that their spending cannot be controlled by the central bank (not that it is anyway). It's not going to happen but, even if it did, the resulting 'cashless' society' would not be the 'moneyless' society that socialists have always envisaged.
Socialism will be a moneyless society because, both productive resources and products when they are produced being commonly owned, there will be no exchange of goods and services of equal economic value, no buying and selling, only distribution (whether through free distribution or free access). So there would be no need of money as a means of exchange, money's primary function.
A cashless society would still have an exchange economy, the difference being that the means of exchange would no longer include notes and coins, only electronic transfers. In fact this is already how most exchange transactions are done. Capitalist firms and banks have long since abandoned transferring wads of notes to make a payment or a loan. And individuals are using electronic payments more and more. As Conway notes:


'The majority of our day-to-day transactions now take place using credit cards, contactless payment and charge cards (such as Oyster cards). Internet banking means you can transfer money to someone in a few clicks.'

Notes and coins are not in themselves money, but only tokens for it. There is no reason in principle why they couldn't be replaced by something else – by, precisely, digits on a computer. These too are still tokens for money because the purchasing power they represent circulates. If, like store cards, they were cancelled on use, they wouldn't be money-tokens but this is not what happens. They are transferred from owner to owner just as cash is and are just as much 'currency'.
Socialism will involve the disappearance not just of notes and coins but also of these other, electronic tokens for money as a means of exchange and payment. It will be a 'plastic-less' society too.
Posted by Imposs1904 at 6:38 PM No comments: