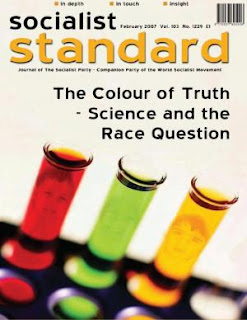 Editorial from the February 2007 issue of the Socialist Standard
Former Labour Cabinet Minister, Claire Short, describes Tony Blair as "delusional". We don't know about that, but he does seem to think that he too, like his buddy George Bush, is the commander in chief of his country's armed forces.
Last month he was televised making a speech on board a warship in the Plymouth naval base surrounded by khaki-clad soldiers and camouflaged armoured cars.
Exactly the sort of background Bush chooses to make his pro-war pronouncements, but he has an excuse in that, constitutionally, he is the commander in chief. Blair is just the Queen's first minister.
Blair told the assembled military personnel that he wanted them and the rest of Britain's armed forces to be "warfighters" and not mere "peacekeepers", and pledged to prepare for the future wars he foresees," increased expenditure on equipment, personnel and the conditions of our armed forces".
It was an extraordinary display of gung-ho militarism from the head of a Labour government whose first Foreign Secretary declared that Labour, unlike the Tories, would pursue "an ethical foreign policy" and from the leader of a party that once used to pride itself on being the peace party. But, given world capitalism, his argument has a ruthless logic.
Blair drew a distinction between "hard power" (military might) and "soft power" (diplomacy) and argued that if Britain "retreated" into maintaining its armed forces merely for peacekeeping then "inexorably" its "soft power" would be weakened too.
According to the Financial Times (12 January),he said that "the main risk for the future was not gung-ho leaders too keen to embark on military adventure - but those who concluded that military engagement was too difficult and thereby fall into a passive disengagement"; in which case "the result would be 'Britain's reach, effect and influence qualitatively reduced'".
It's an argument that can't be faulted. Capitalism is a world-wide system involving a competitive struggle for profits in which all states vie with each other to influence the course of events in favour of profit-seeking enterprises from within their borders. Normally this takes the form of diplomatic initiatives and manoeuvrings but the weight other states attach to these depends on whether they think the state in question has the means - and the determination - to back them up.
The means can be - still in the realm of Blair's "soft power" – economic retaliation or sabre-rattling, but to be credible a state must ultimately be prepared to do more than merely have big sabres or just rattle them.
Blair's model, Mrs Thatcher, understood this well (even if at the time he himself didn't, sporting as he then did a CND badge). Which is why when third-rate power Argentina took over the Falkland Islands she sent out the "task force" to recover them. If she hadn't, Britain's credibility and standing in the international pecking order would have gone down.
So Blair is right. Without armed forces trained and equipped for "war fighting" (and killing and dying) beyond its frontiers, Britain's "reach, effect and influence" to further the interests of its capitalist class in the international arena will be weakened.
The terrifying fact is that it is not him who is deluding himself (at least not on this point) but those who believe that an ethical foreign policy is possible.
The international state-system that world capitalism has engendered is not one where there are any rules. It's every state for itself, no favours given and woe to the weak. If Britain's rivals on the  world stage thought that its government had moral scruples about going all the way in employing its armed forces they would give less weight to its diplomatic initiatives in defence of its capitalist class.
So, what are we to conclude? By all means let those who want a world without war denounce every war that takes place but without the illusion that we can get states within capitalism to renounce war as a policy option.
This will never happen as it goes against the whole logic of the capitalist state-system. Once again, it is quite literally true that world-wide socialism is the only framework within which a lasting peace can exist. Let us, therefore, work for it as the priority of priorities.
Posted by Imposs1904 at 3:42 PM No comments:

We are to be re-brainwashed!

Those in charge of the political affairs of British capitalism are worried. The nationalist propaganda that their predecessors pumped out for years -- justifying the British Empire on the grounds that the colonised peoples were inferior -- has come back to haunt them. A large section of the native working class still believe this crap, long after it has ceased to be any use to the ruling class. Now that there is a large minority of workers from or descended from people from the old Empire, our rulers want them, in the interests of national unity, to be regarded as fellow Britishers. So now they are going to "educate" workers that it is nasty and wrong to go on thinking that black people are inferior and cannot be British.

Of course people who have dark skin are not, and never were, inferior. All human beings are members of the same biological species -- homo sapiens -- and we all have the same capacity to learn. There is, if you like, only one race -- the human race. We are all citizens of the world, Earthlings.

But this is not what the politicians are proposing should be taught in the schools. They want to teach working-class kids "what is means to be British" as Jack Straw put it in a speech at Oxford University. According to Times (26 January), in true Jingo fashion he "called for a strong 'British story' to reflect the heroic nature of the country's history and foster a greater sense of citizenship".

So, although racism is now out, equally divisive nationalism is still in and is in fact to be stepped up. Schoolkids are to be taught, as before, that they are primarily members of a supposed "British nation" all of whose members allegedly have a common interest different from the subjects of other so-called "nation-States". The only difference will be that they will be taught that this British nation now includes dark-skinned people from the former Empire and that such people too can now proudly look down on "foreigners".

Socialists will try to do what we can to counter this nationalist state-propaganda by pointing out that nationalism is an ideology which ruling classes use to try to obtain the acquiescence and support of those they rule over and that wage and salary workers from all countries have more in common with each other than with their rulers. Ultimately, they have a common interest in establishing a socialist world commonwealth where there'll be no frontiers or nation-States just people speaking different languages and enjoying different tastes in dress, music, culture and the like but which everybody will be entitled to share in.