From the June 2011 issue of the Socialist Standard

I recently had the opportunity to witness a fascinating historical re-enactment. It was the open air reading of a speech for a group of students. This reading was a reminder of how little the effects of capitalism, and the crisis that is capitalism, change. Two hundred years ago, in the midst of the trade depression during the European war against Napoleon’s France, English weavers rose up in a campaign of machine wrecking that has gone down in history as Luddism. Across Nottinghamshire, Yorkshire and Lancashire, groups of weavers attacked machines held by owners benefiting from the collapsing labour market.

The response of the masters was first to call in the militia and the army, and ultimately to make the very act of frame wrecking a capital offence. In the midst of this mayhem, we have another recognisable feature: the celebrity campaigner. In this case, it was the first modern celebrity himself, George Gordon, Lord Byron.

The poet used his position as the inheritor of a peerage to make a maiden speech in the House of Lords against the Frame Breaking Act. Not trusting himself to improvise a speech, he wrote it out beforehand. Although, by accounts, his delivery was poor (much as the modern re-enactment was), it is a clear example of what his hero, the poet, Alexander Pope meant when he wrote:

“True Wit is Nature to Advantage drest, What oft was Thought, but ne'er so well Exprest”

It was a finely crafted piece of prose. He used his skill with the pen to rally to the defence of those workers. He observed “As the sword is the worst argument that can be used, so should it be the last. In this instance it has been the first; but providentially as yet only in the scabbard. The present measure will, indeed, pluck it from the sheath; yet had proper meetings been held in the earlier stages of these riots, had the grievances of these men and their masters (for they also had their grievances) been fairly weighed and justly examined, I do think that means might have been devised to restore these workmen to their avocations, and tranquillity to the country.”

He was no socialist, but he had a clear sympathy for the predicament of the impoverished weavers, and the desperation that lay behind their actions: “they have arisen from circumstances of the most unparalleled distress: the perseverance of these miserable men in their proceedings, tends to prove that nothing but absolute want could have driven a large, and once honest and industrious, body of the people, into the commission of excesses so hazardous to themselves, their families, and the community”. In fact, a socialist speaker could hardly have put the case more plainly. In countering the outcry against these ‘mobs’ he asked: “Are we aware of our obligations to a mob? It is the mob that labour in the fields and serve in your houses –  that man your army and recruit your navy – that have enabled you to defy the world, and can also defy you when neglect and calamity have driven them to despair.”

The weavers, he asserted: “were not ashamed to beg, but there was none to relieve them: their own means of subsistence were cut off, all other employment preoccupied; and their excesses, however to be deplored and condemned, can hardly be subject to surprise”. Nor was this simply the reaction of those frightened by technology but of men “willing to dig, but the spade was in other hands”.

Throughout he deployed his famed wit to skewer the masters and the originators of the law, but it was at the end of his speech he was most scathing:

“[S]uppose one of these men, as I have seen them meagre with famine, sullen with despair, careless of a life which your lordships are perhaps about to value at something less than the price of a stocking-frame; suppose this man surrounded by those children for whom he is unable to procure bread at the hazard of his existence, about to be torn for ever from a family which he lately supported in peaceful industry, and which it is not his fault than he can no longer so support; suppose this man – and there are ten thousand such from whom you may select your victims, – dragged into court to be tried for this new offence, by this new law, – still there are two things wanting to convict and condemn him, and these are, in my opinion, twelve butchers for a jury, and a Jefferies for a judge!” (The full speech can be found online here: http://tinyurl.com/6kgy6qf)

A year later, in 1813, such a jury of butchers was sadly found, and 17 men were executed at York. Then as now, the masters had recourse to the bayonet and the noose. Then, as now, this was not forgotten.
Pik Smeet 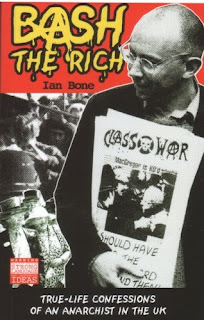 Book Review from the March 2007 issue of the Socialist Standard

Like the notorious Class War journal he founded and edited, Ian Bone’s autobiography is a rather mixed bag; chaotic, energetic, full of aggro and humour a-plenty, and containing some sharp but sometimes ‘prole-ier than thou’ political observations. Subtitled True-Life Confessions of An Anarchist in the UK, this honest and entertaining book details up to 1986 the political adventures of the man dubbed “the most dangerous ... in Britain” by the excitable Sunday People newspaper. This was at a time when Class War, the paper founded by Bone, was at its peak, baring its political arse at the establishment and urging fellow activists to ‘bash the rich’.

Before arriving at this point, the book explores Bone’s family background and the formative years of his political activity. An early success came when he launched a local paper where he was based in Swansea. After writing a pamphlet detailing the corruption of the local council, Bone and his allies produced Alarm, a paper which reached sales of up to 5000 a week. Having built up impressive momentum, Bone and three comrades stood in local council elections, but it’s a surprising omission of the book that the results are not mentioned here. Bone describes the paper as “an organ of organised class hatred;” one which focused on corruption, gossip and scandal, and made a virtue of its lack of political theory.

Whilst in some ways a welcome antidote to the convoluted and often po-faced theoretical treatises beloved of the Left, this lack of political oversight was a weakness, and one which was only partly overcome by Bone’s most successful project, Class War. He had come to recognise the limits of localised activities, and Class War was launched with the specific aim of putting “class and violence back at the top of the agenda.”  The idea was to link up those who were prepared to physically confront the State, from innercity rioters and miners’ ‘hit squads’ to animal rights activists and the occasional football hooligan.

In case it all seems to be about the (understandable) politics of revenge, Bone suggests that Class War was merely following in the hallowed tradition of popular mob violence. Aggressive direct action was not just intended to unnerve the well-to do, but to act as a rallying cry to a largely disinterested majority. However, the book isn’t really explicit enough on what kind of society the author wants direct action to lead to. It’s obvious what he’s ‘anti’, but the ‘pro’ bit needs fleshing out. This links to the issue of how such a society can be brought about, and what social force is necessary to achieve this.

One of the most thoughtful chapters comes near the end when Bone discusses the problems revolutionaries face in getting our fellow workers to take an interest in noncapitalist politics. He asserts that groups like the Anarchist Federation and the SWP seem to think that rational explanations of what’s wrong with capitalism are all that’s needed to effect revolutionary consciousness. “The truth, of course, is that people do not respond in a rational way, so painstakingly explaining injustice in rational terms gets you nowhere.” He then quotes with approval  Wilhelm Reich’s view that revolutionaries, “must find the connection with the petty, banal, primitive, simple everyday life of the broadest mass of the people...”. For Class War, a good old scrap was as good a method as any to achieve this.

Such methods, however, can backfire and alienate. If a classless, moneyless, stateless society is to be attained, it surely needs the conscious understanding and desire of a large majority. To be fair, the author does state that “violence wasn’t the answer to every question...” In fact Bone cites the 1985 riots of Broadwater Farm and the death of P.C. Keith Blacklock as a turning point for Class War, although the organisation wasn’t involved there. “We needed to embrace our class not marginalise ourselves by walking into the ‘loonie category’ noose being dangled before us.” According to Bone, Class War’s scabrous column, Hospitalised Copper “was funny. ‘Dead Copper’ wasn’t funny.”

Unfortunately, the book ends rather suddenly, on the eve of the Wapping Dispute in early 1986. Questions of tactics and direction were exercising the Class War collective, but it had some years yet to run before eventually coming to a halt. Maybe a volume two is in the pipeline, and if so it will hopefully also combine this refreshing mix of humour and politics. Bone has certainly had a great deal of fun along the way, and made sure that such enjoyment was reflected in the various projects he was involved in. To end with an example, the first two Class War conferences are said to have been preoccupied with sexual politics, and Bone recounts with wry discomfort how one contributor earnestly proposed  ‘forced bisexuality’ as a way of breaking with bourgeois convention.
Robert Whitfield
Posted by Imposs1904 at 2:10 AM No comments: