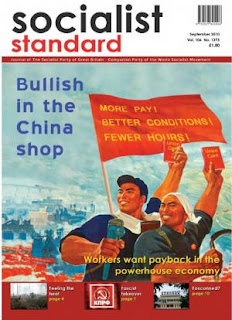 In a Russian-language document now circulating on the internet, Yevgeny Volobuyev, a member of the Communist Party of the Russian Federation (CPRF) in St. Petersburg, “sounds the tocsin to warn of the danger of the CPRF finally turning into a fascist party”.

Volobuyev explains that Russian fascists have been arguing for a long time on their websites about “what to do with the CPRF”. Some said that they should just put communists “up against the wall”, but others argued that they should first join the CPRF and take over its structures. In recent years, with openly fascist organizations like Russian National Unity fragmenting and losing legal status, “fascists and people inclined toward fascism streamed into the CPRF”. There they found many party leaders “demoralised by the collapse of the Soviet Union” and sympathetic to their cause. With the help of these leaders, they “were able to create an unofficial fascist faction inside the CPRF” (officially the party does not allow factions). They also managed to gain control of the party’s internet sites.

The infiltrators would have been less successful had the ground not been so well prepared for them. Ever since the CPRF was founded in 1993, it has been dominated by the Russian nationalist (“patriotic”) tendency led by Gennady Zyuganov. Until now, however, the party also had a place for people who still call themselves “internationalists” and “Marxist-Leninists”. (For an analysis of tendencies within the CPRF, see Chapter 3 of Stephen D. Shenfield, Russian Fascism, NY: M.E. Sharpe 2001.)

Mass expulsions
That is now changing. The fascist faction, acting through its allies in the party leadership, is carrying out individual and mass expulsions with a view to purging the CPRF of all opponents of Russian nationalism: “The party organizations of entire regions are being destroyed.” Some local branches, such as the one to which Volobuyev belongs, have been targeted simply because of their multiethnic composition. “The situation has descended to the point of measuring skulls.” Only people of pure Russian descent are wanted.

The “internationalists” are accused of refusing to participate in the “national liberation struggle” against Jews and other ethnic minorities branded as enemies of the Russian nation. Many party members are also accused of “neo-Trotskyism” – on the face of it an absurd accusation, as Volobuyev remarks, because with hardly any exceptions they have never read Trotsky and have no idea what Trotskyism is, let alone neo-Trotskyism. But the Russian nationalists know that Trotsky was the most prominent opponent of Stalin, whom they count as one of their own. And they know that Trotsky was a Jew.

“Communist” oligarchs
The nationalists and fascists in the CPRF are allied with various party figures – all of ethnic Russian origin, of course – who are also big businessmen (“oligarchs” in current Russian parlance). One such figure is Alexander Afanasyev, owner of a chain of pharmacies. According to Volobuyev, the motive underlying the destruction of 22 of St. Petersburg’s 29 district party organizations was to clear a space on the CPRF list of candidates for Afanasyev to get a seat in the State Duma (parliament).
Another “communist” oligarch is the CPRF functionary and insurance and vodka tycoon Sergei Shtogrin, currently deputy chairman of the Duma Committee on Budgetary and Tax Issues. Shtogrin has argued in favour of encouraging greater alcohol consumption as a way of increasing state revenues.

The Leninist organizational model
Most of the fascists’ victims do not understand what is happening. They believe that a “mistake” has been made and that “if they appeal to Zyuganov and the Central Committee truth will triumph”. As “disciplined and law-abiding communists”, they are reluctant to consolidate their forces by creating an “internationalist” or “Marxist-Leninist” faction, because that would break party rules.

This sense of “discipline” reflects the basically undemocratic structure of the CPRF, which remains wedded to the Leninist organizational model of “democratic centralism”. It is clear from Volobuyev’s account that ordinary members and even branch organizers still look to remote leaders for guidance and initiative. They take pride in the awards they receive from the leaders and are chastened by their reprimands – just like in the good old days of the “Soviet” regime.

The undemocratic structure of the party facilitates the fascist takeover in other ways too. There is weak democratic oversight of the process of admitting new members, so there is no effective barrier to the infiltration of people whose real views are incompatible with party principles. Arbitrary decisions can be made "from above" to expel members and whole branches without adequate explanation.

What next?
Assuming that no effective moves are made to block the fascist takeover of the CPRF, what are the likely consequences for Russian politics? The CPRF will lose many of its local activists and depend increasingly on funding from oligarchs. It may end up with little to distinguish it from Zhirinovsky’s Liberal-Democratic Party of Russia, competing with the LDPR for the same extreme Russian nationalist electorate.

Some new organizations may be formed by “internationalists” expelled from the CPRF. These people do not share the same views except on the admittedly important issue of nationalism. Some would like to restore some version of the “Soviet” system. Others think in terms of reforming private capitalism or envisage some kind of “market socialism”. Perhaps at least a few will be prompted by their experience in the CPRF to move toward a more democratic mode of organization and conception of socialism.
Stefan
Posted by Imposs1904 at 12:08 PM No comments: