Obituary from the April 1976 issue of the Socialist Standard

Ted Ford was the oldest member of the Party and had he lived a few more months he would have been 94 years of age. Ted, till the last, was cheery, full of fun and as optimistic as ever that the day was not far away when the workers of the world would embrace a Socialist system of society.

Born in the village of Thrupp, Gloucestershire, in 1882, he neither lost his accent nor his affection for the county of his birth. He was for years a contributor to the correspondence columns of the Stroud Journal, challenging unsound views on a variety of subjects and putting forward the Socialist message. (Nobody who became acquainted with Ted for long was unaware of the Party and the case for Socialism.)

Just after the turn of the century he came up to London to become an apprentice outfitter, living over the master's shop in Upper Street, Islington (a veritable Mr. Kipps). At that time he was a keen pacifist as were his parents and others in the family. An amateur actor, he joined the local group and there met the women who was to be his life-long partner.

The SPGB had been formed in 1904 and shortly afterwards Ted's burning opposition to the injustice and violence of capitalist society led him to attend the meetings of our Islington Branch and become a member. In 1906 the branch came into head-on collision with the Executive Committee and was finally expelled by the membership, including Ted. One might say a case of throwing out the baby with the bathwater! He used to say that had he been more aware of the situation at the time he would have applied for re-admission.

However, he never lost either his concern or support for the Party and always considered himself a member.

During the First World War, when his time came, he stood up to be counted, declaring himself a supporter of the Party, and having no quarrel with other workers that justified their slaughter. Like many others he found himself serving his time in both Wandsworth and Wormwood Scrubs prisons. Outside these prisons Ted's family — his sisters and young nieces with their parents — would stand singing the 'Red Flag' and the 'International' and other songs to raise the spirits of the political prisoners.

Subsequently he re-joined the Party and during the Second World War was the literature secretary of the Edgware Group — later Branch — and is well remembered as a regular seller at the indoor and outdoor meetings.

Throughout his life he was plagued with deafness which was almost complete in his latter years. Despite this handicap he retained his cheerfulness, his great interest in literature and poetry and his optimism for the future.

His cremation took place on March 2nd, which was attended by relatives and friends, amongst whom were several members. A member spoke on behalf of the family and the Party. 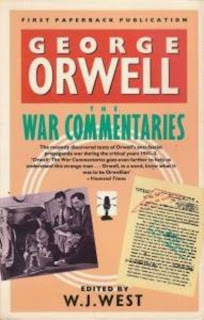 Book Review from the December 1987 issue of the Socialist Standard

George Orwell: War Broadcasts and War Commentaries. Edited and with Introductions by W J West (Penguin Books, £4.95 for each volume).

On health grounds, his TB having been made worse by a wound received in the Spanish Civil War, Orwell was unfit for military service in the second world war. From 1941 to 1943 he was employed by the BBC, then under the control of the Ministry of Information, to broadcast to British troops and others in India. The War Commentaries though written by Orwell were mostly broadcast by others, as weekly news talks on the progress of the war.

Orwell had been selected to conduct the broadcasts, which were designed to counter German propaganda, although he openly opposed British government policy on India which, of course, did not mean that he had a free hand to say what he liked. When governments are at war propaganda is itself an important weapon, to be controlled and directed as military strategy requires. All broadcasting was subject to censorship and Orwell, like other broadcasters, sometimes had his choice of subject or his choice of people to participate in talks ruled out by the censor. The editor of these two volumes sees how Orwell's experiences working for the BBC provided him with the background for his Animal Farm, published in 1945, and Nineteen Eighty Four, published in 1949. 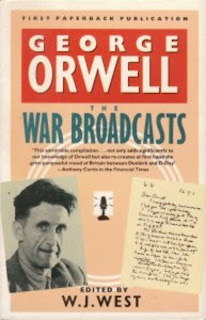 Most of what Orwell said and wrote concerned incidents in the war and in the life of British civilians under war conditions but he was also able to deal with aspects of English literature. Among the writers he discussed with his accustomed insight were Shaw, Wells, Wilde, Jack London and Shakespeare.

Anyone hoping to find in these volumes evidence that Orwell had consistent political views will be disappointed. He seems to have shared the popular belief in the rosy future capitalism had to offer. In the broadcast English Poetry Since 1900 he criticised the earlier poets for their failure to appreciate the changes brought about by machinery and technology:

Every educated person knows that given a reasonable amount of international co-operation, the world's wealth could be increased, health and nutrition improved, drudgery abolished, to an extent unthinkable a few decades ago.

To a limited extent there is some improvement but nothing will prevent capitalism running into depressions with mass unemployment and, of course, into wars.

Orwell's occasional mentions of Marx and Marxists are interesting, including the unintentional humour of his remark (page 119) that "nowadays everybody has read Marx". He chose Harold Laski as a representative spokesperson on Marx. Laski's writings showed that his knowledge of Marxian economics was minimal, including a total failure to understand Marx's Labour Theory of Value. On the other hand, Orwell, rather surprisingly, did appreciate how wrong all the alleged Marxists were who believed that capitalism would collapse of its own accord, "automatically", and who attributed this erroneous doctrine to Marx.

While Orwell was carrying on this propaganda work for the BBC he received a letter of bitter criticism from the anarchist George Woodcock, which contained the following:

It may be that Orwell, in his own estimation, could see no inconsistency in his activities, but he does not appear to have answered Woodcock.
Edgar Hardcastle
Posted by Imposs1904 at 11:17 PM No comments: 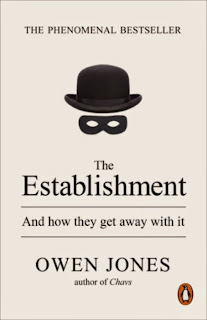 Book Review from the May 2015 issue of the Socialist Standard

'The Establishment: and How They Get Away With It', by Owen Jones. Penguin £8.99

The Establishment, according to Owen Jones, consists of politicians, media barons, businesses, financiers and the police. They ‘manage’ democracy to ensure that it does not damage their interests. The Conservatives are its most natural political representatives, and the Labour Party in effect accepts the Tories’ main ideas. The Establishment shares mentalities but is not any kind of organised conspiracy. Its basic ideology is that of free markets and neo-liberalism, yet it is in fact completely dependent on the state.

Jones provides myriad examples of the connections among the different members of the Establishment. The mainstream media, for instance, are controlled by a small group of very powerful individuals, and the press and TV provide consistently misleading coverage, which often leads to people having absurdly exaggerated ideas about, say, the extent of social security fraud. Slightly awkward MPs such as Tom Watson and Chris Bryant have been subject to nasty personal attacks and may be put under covert surveillance. The BBC too is ‘a mouthpiece for the Establishment’, presenting the free-market view as an apolitical stance.

While benefit claimants are attacked in the press and people who are seriously ill are assessed by the likes of Atos as capable of working, there is a whole industry devoted to reducing the tax paid by the rich and the companies they own. Big accountancy firms such as Ernst & Young help design laws on tax avoidance and then advise clients on how to get round them. They have played a part in the increased concentration of wealth at the very top of the social pyramid.

The police, however, occupy a somewhat precarious place in the Establishment. They were needed to defeat the unions in the 1980s, especially the Miners’ Strike, and Thatcher’s government gave them a big pay rise. The police PR machine became very friendly with newspaper editors. But, with the Establishment now feeling more firmly in control, the police themselves have been subject to cuts and privatisation: in November 2012 thousands of police officers marched in London in protest against cuts.

Despite all the propaganda about free markets and freeing society from the dead hand of the state, the Establishment relies on the state machine to defend its interests. This covers not just bank bailouts but also the provision of infrastructure, support for research and development, the protection of property, and subsidies to companies via benefits for the low-paid. Organisations such as the Adam Smith Institute have succeeded in setting the framework for political debate, with anything slightly at odds with their ideas seen as completely beyond the pale. It is really only on the subject of the EU that the Establishment shows a divergence of views.

Jones gives a well-researched guide to all this and much else besides, which makes the milk-and-water nature of his own proposals all the more disappointing. In the foreword he describes the Green Party’s policies as ‘a genuine assault on the Establishment’ and in his conclusion he calls for a ‘democratic revolution’. But all this consists of is nationalisation, attacking tax avoidance, increasing the minimum wage and controlling private-sector rents. This might lead to some redistribution of wealth, but it will not truly disturb the status quo.
Paul Bennett
Posted by Imposs1904 at 1:40 PM No comments: 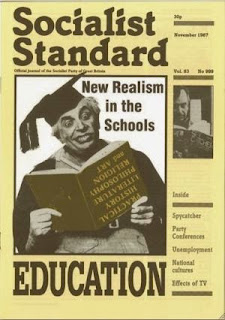 Grind's the name. Gary Grind. Special Investigator. Department of Health and Social Security. I hunt down the scroungers and moonlighters. Make the claimants sick, anti-social and insecure. Geddit? Sometimes this job means dark and lonely watches, staking out some dame's home to see if she's got a boyfriend supplying her champagne, caviar and designer clothes. Know what I mean? It's hard in the small hours with only a pack of Rothmans and your conscience to keep you company. Brings a man up against himself. Makes him ask - what's it all about?

The latest bit of moonlighting we're on to is these motor bike couriers. Means a lot of cold waits on street corners and roundabouts. It's not easy checking faces under those crash helmets and visor things. But you won't hear any complaints from yours truly. It's my job.

I suss out a lot in the pub. My local's just across the street from the betting shop. I can keep watch, see if any punter known to me is in there squandering the giro. Course, if he wins any money he's for it  -  undeclared income. The other day, got talking to this weirdo about my job. He reckoned the real scroungers will never need to apply for the social because they live off profit. Said I'm propping up the system of exploitation. Ever investigated that, he asked. Didn't like his face -  I can smell a trouble-maker a mile off. When I got up to go, I shook his hand. He looked surprised but I was only checking if he was moonlighting. Must always be on the watch.