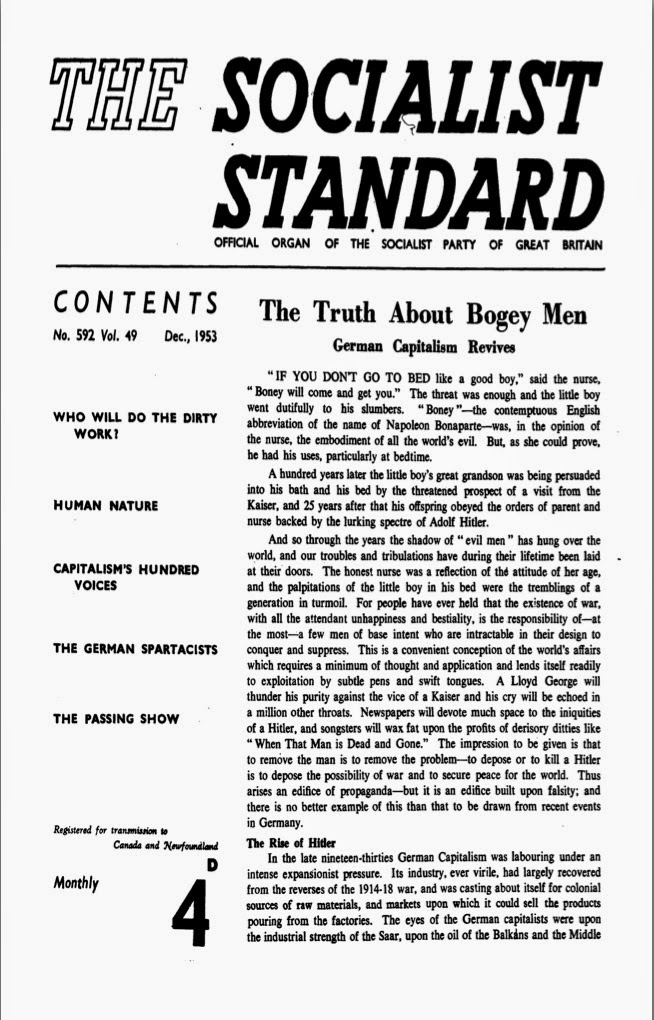 From the December 1953 issue of the Socialist Standard


She was born on March 5th, 1871, of comparatively well-to-do parents in the poverty-stricken little Polish town of Zamosc in the Lublin district, not far from the Russian frontier. Her Jewish parents were in the timber trade and afforded her and their other four children an education above the average, despite the hostility to Jews in the Warsaw schools which they attended.

These two, Rosa Luxemburg and Karl Liebknecht, were driven closer together during the 1914-18 war. Both had a hectic political career, she in Poland, Russia and Germany, and he mainly in Germany. Their opposition to the war caused them both to serve frequent and lengthy periods of imprisonment.

In 1914, that organisation of national so-called Socialist parties, known as The Second International, fell to pieces. Each of the parties that comprised it threw aside its talk of international fraternity of the working class and lined up with its own capitalist class in the prosecution of the war, urging its members to take up arms against their fellow workers in other lands. The German Social Democratic Party was no exception. Karl Liebknecht, under pressure of party discipline, together with other Social Democratic members of the Reichstag, voted for war credits. But, only once. Thereafter he consistently opposed the prosecution of the war, often being the only one in the Reichstag to do so. The English and French capitalist press applauded him, the German capitalists imprisoned him.

As the war continued and the pressure on the German workers became heavier, Liebknecht received more and more support. The German Social Democratic Party split. On January 1st, 1916, at a meeting in Liebknecht's house, a programme drawn up by Rosa Luxemburg, was accepted and published under the nom-de-plume of Junius. It was further decided to publish a clandestine journal entitled "Spartacus" and the group became known as the "Spartacus League," until January 1st, 1919, when it became the Communist Party of Germany.

Another group, led by Kautsky and Haase, broke away from the Social Democratic Party after a conference at Gotha in early 1917. This group, unwilling to line up with the Spartacists, formed itself into the German Independent Social Democratic Party. It was approximately parallel to the British Independent Labour Party and, like the Spartacists, opposed the continuation of the war.

By September 1918 it became apparent to the German military high command that the war was lost. General Ludendorff resigned and President Hindenburg wrote to the chancellor, Prince Max of Baden, demanding that the government should accept the responsibility of asking the allied powers for an armistice. A new cabinet was appointed, but the German workers were too war weary to be impressed.

The sailors at the Kiel naval base mutinied, took over the fleet and set up committees with the dockyard workers on November 4th. By November 7th the rising had spread to Hamburg and Munich, army reservists joining with the factory workers. On November 9th a general strike occurred in Berlin and the soldiers of the garrison elected representatives to attend the committees set up by the workers. On the same day, Ebert, a Social Democrat, was made chancellor and the Berlin workers and soldiers, at a giant meeting, elected a government called the Council of the Representatives of the People. It consisted of three members of the main Social Democratic Party and three of the Independents.

The Council of the Representatives of the People introduced legislation for an eight hour day, extension of the franchise, re-instatement of demobilised soldiers, participation of trade unions in wage agreements and the constitution of new legislative bodies. But capitalism remained unchallenged and the army facing the Russian border was left under the command of the old General Staff.

The Spartacists tried to carry the rising to further limits. They organised large demonstrations and armed conflict broke out all over Germany between workers and the state and municipal authorities. The Independents withdrew from the Council of People's Representatives and the majority group of Social Democrats had the government to themselves.

The soldiers who were being disbanded from the war areas were re-enlisted into detachments for "frontier defence" and picked and trusted men and officers were organised into "Free Corps" and trained for street fighting. They were still under the orders of the war-time officers and were still paid from the army funds.

The Spartacus League was a small organisation consisting of tiny autonomous groups scattered all over Germany. On November 18th it published a newspaper called Rote Fahne (Red Flag) with Liebknecht and Rosa Luxemburg as editors and with Paul Levi, August Thalheimer, Paul Lange, Hermann Dunker, Wilhelm Pieck and Leo Jogiches in support. In this paper the aims of the Spartacists were published. Rosa Luxemburg wrote: -


"The abolition of capitalist rule and the creation of a socialist order—this and nothing else is the historical theme of the German Revolution. It is a tremendous task and it cannot be performed overnight with a few decrees from above, but only be the conscious action of the toiling masses in town and country, and by the highest degree of intellectual maturity and idealism on the part of those masses pursuing their aim through all vicissitudes until final victory." - "Rosa Luxemburg," by Paul Frolich. Gollancz.

(Condensed from "The Aims and Objects of the German Spartacists," published in English by the British Socialist Party, 1919.)

Huge demonstrations organised by both sides, the Democratic Party and the Spartacists, took place during December, 1918. The Democratic authorities issued posters calling:

"Workers! Citizens!
Our Fatherland is threatened with destruction. Save it. It is no longer threatened from without, but from within. Spartacus threatens to kill it. Kill their leaders. Kill Liebknecht. When they are dead you will have peace, land and bread. Soldiers from the front."—("Rosa Luxemburg," by Paul Frolich. Gollancz.)

In January 1919 the government ordered the dismissal of all Independent Social Democrats from posts of authority, including Eichhorn, Berlin chief of police. Eichhorn refused to resign and, although his own Independent party did not support him, the Spartacists did. They occupied police headquarters and the offices of a number of capitalists' newspapers on Sunday, January 5th. Armed workers, supporting the Sparctacists, marched into railway stations, food warehouses, the Royal stables, the Chancellory, and other large buildings. The Spartacists issued a call for the overthrow of the government and the setting up of a workers' republic.

The government set to work and appointed Noske as Governor-General of Berlin with extraordinary powers. He called in the "Free Corps" and the Spartacists and their followers were soon dislodged from their buildings, and driven into their homes where they were relentlessly pursued. Most of the leaders were caught and imprisoned and many workers were killed. Liebknecht and Luxemburg escaped but on January 15th they were taken at their hiding place in 53, Mannheimer Strasse in Wilmersdorf by a group of soldiers.

They were taken to the Eden Hotel for questioning. When being taken from this building Liebknecht was struck on the head with a rifle butt, bundled into a car by a Captain Horst von Pflugk-Hartung, driven away and shot in the back by this officer. His body was taken to a mortuary and delivered as an unknown man found dead in the Tiergarten.

When Rosa Luxemburg came out of the Eden Hotel she was also struck on the head with a rifle butt by a soldier named Runge, who smashed her skull with two blows. A Lieutenant Vogel put her body in a car and later threw it into the Landwehr Canal, from which it was not recovered until the following May.

Thus ended the attempt by the Spartacist League to emulate the Bolshevik seizure of power of October, 1917.

Frederick Engelsin his preface to Karl Marx's "Class Struggles in France" wrote these words 25 years before the Spartacist rising: -

"Even in the classic time of street fighting, therefore, the barricade produced more of a moral than a material effect. It was a means of shaking the steadfastness of the military. If it held out until this was attained, then victory was won; if not, there was defeat."
"But since then there have been very many more changes, and all in favour of the military. If the big towns have become considerably bigger, the armies have become bigger still."
"On the other hand, all the conditions on the insurgents' side have grown worse. An insurrection with which all sections of the people sympathise will hardly recur . . . "
"And, finally, since 1848 the newly built quarters of the big towns have been laid out in long, straight, broad streets, as though made to give full effect to the new cannons and rifles. The revolutionary would have to be mad, who himself chose the working class districts in the North and East of Berlin for a barricade fight."

It is a pity the Spartacists did not give heed to Engels words. Many lives could have been saved to continue the struggle in more useful fields. Even had the insurrection been successful it could only have resulted in the Spartacists governing a capitalist Germany. The majority of German workers had no understanding of socialism and as little inclination for social revolutionary change. The Spartacists would have been in the same position as the Russian Bolsheviks—governing by force and terror—forced into administering capitalism.

Books to read: -
"The Growth of Modern Germany" by Roy Pascal.
"A People's History of Germany" by A. Ramos Oliveira.
"Rosa Luxemburg" by Paul Frolich.
"Hammer or Anvil" by Evelyn Anderson.
"The Birth of the German Republic" by Arthur Rosenberg
"The German Spartacists, Their Aims and ObjectsT" published by the B.S.P.