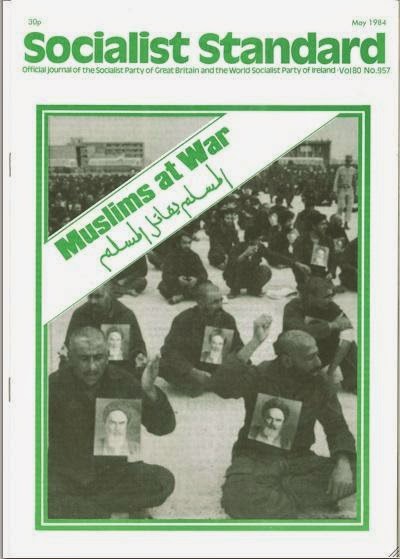 From the May 1984 issue of the Socialist Standard

Roger Scruton arrived early to debate with the SPGB in Guildford. The debate wasn't due to start till 8pm, so one of the members suggested I take him to the pub across the road for a drink.

He ordered Irish Whisky and we started to talk. I was interested to see the human side of a man I only knew from difficult-to-read books on politics and philosophy, a highly reactionary weekly column in the Times and highbrow discussion programmes on radio and television. I'd read in the press that he was arrogant, conceited and intolerant. I found him modest and likeable and the more we chatted the less accurate the press descriptions seemed to be. I asked what had made him accept our challenge to debate and he said that he thought that opinionated people like himself should be called on to defend their opinions in public.

He hadn't made any detailed preparation for the debate and asked me if I'd tell him about the Socialist Party and what my arguments were going to be. I did, and he admitted that it wasn't what he'd expected. He said he'd make a few notes to speak from and did this while I went to the bar for more drinks. As we walked back to the hall he said he thought he'd got the message about the Socialist Party, but wouldn't a fully democratic socialist society be an impractical proposition because of the time and effort involved in people voting democratically on absolutely everything? I told him that everyone wouldn't have to vote on everything but only on those things that directly concerned them.

The swirling rain made me think we wouldn't have much of an audience. And when we entered the hall, there were about fifty—fewer people than could have been expected for a meeting with a "celebrity".

Scruton was introduced by the chairman as a leading conservative philosopher and editor of the Salisbury Review. He was answering no to the question: "Is Socialism Compatible With Freedom?" He opened with a joke—a funny one. He said he understood that the Socialist Party no more supported the countries that called themselves "socialist" than those which are openly capitalist, and this reminded him of an old, East European joke: "Under capitalism man exploits man; under socialism it's quite the other way round".

On the subject of freedom he started off on a tack that he said would probably seem unusual. He talked about love. He said that love between two people placed limitations on their freedom but that nobody would say that this was a bad thing because they were limitations that had been freely chosen and desired. In the same way, he went on, capitalist society limited people's freedom in some areas but this was with their consent. They consented to it because they realised that these limitations—those involved in wage labour—were necessary in order to be able to enjoy the other freedoms and choices that capitalism gave them. Capitalism he claimed, with its markets, wage labour and money system, gave the maximum freedom available, and gave far more of it than previous societies such as feudalism.

He spoke fluently along these lines from the sparse notes he'd made in the pub, showed an accurate knowledge of Marxist ideas, and ended by stating that if socialists thought a different kind of society could be more free that the present one, then the onus was on them to describe and define it. But the "facts of human nature", he insisted, were on his side and all attempts so far to put socialism into effect had, far from increasing people's freedom, ended up restricting it.

This last point, I felt, was one below the belt as Scruton had earlier recognised and accepted the Socialist Party's description of countries like Russia, China and Cuba as not socialist but state capitalist. I began, therefore, by pointing out that Scruton couldn't reasonably damn the idea of socialism because of what had happened under state capitalism and because the state capitalist rulers happened to call their regimes socialist. I pointed to the openly repressive features of such regimes—one-party rule, political prisoners, press censorship, state-run trade unions—and agreed that by comparison countries like Britain, the USA, Germany and Japan appeared to enjoy considerable freedom. But, despite appearances, they did restrict personal freedom in an absolutely fundamental way—in operating the system of employment.

This meant that most people were bound for most of their lives to a set place of residence, set living conditions and a set job—whether they liked it or not. The job they did was not necessarily one they found pleasant or satisfying but one they needed to do to have money to live. The employment system was shared by countries on both sides of the Iron Curtain. So in both East and West people were denied freedom by needing to work for wages or salaries and therefore by not having control over what they did with their own lives.

Despite his lack of preparation Scruton had timed his contribution to exactly the agreed twenty minutes. Looking at my watch I realised that I'd have to rush if I didn't want to run over. The chairman had already started putting slips of paper in front of me. I breathlessly tried to take up Scruton's challenge to describe and define a freer society than capitalism. It was clear, I said, that enough resources now existed potentially to satisfy people's needs the world over if production of goods and services could take place directly for need and not for sale and profit. This was the basis of the "freer society: Scruton wanted defined. It would be a worldwide moneyless system of free access—"the supermarket without the bottleneck at the cash desk". And the shelves of the supermarket would be kept full by the voluntary co-operative work of people for whom work would not be compulsory toil for money but conscious, freely chosen activity to satisfy their own needs and those of society as a whole. In a society of common ownership and democratic control no one would be able to compel others to do work in conditions they found unacceptable. In this society people would value work, as they often value leisure today, for the creative or pleasurable activity it represents, not for the money it earns them. I sat down just as the chairman was about to make me.

The question time was interesting. Scruton, although he didn't say so, must have been surprised by the friendly atmosphere and the cordiality of the audience. Any visions he'd had of meeting wild lefties must have been completely dispelled as contributors from the floor addressed him without hostility and with a clear desire to exchange ideas. It was he who became heated when it was put to him that rather than compare the amount of freedom in capitalism to the amount in feudalism, he should be comparing capitalist freedom to the kind of freedom there could be in a future society—socialism—where modern technology could be maintained and used but in a quite different setting. Scruton, argued the questioner, had presented no solid theory of "human nature" to show that such a society was not possible. Scruton went a bit wild, said the debate had been forced on him and referred to my own description of what socialism would be like as "a lot of air". My reply to this was that he lacked imagination in not wanting to contemplate anything beyond the narrow confines of present reality.

He soon cooled down as more questions came from both socialists and non-socialists in the audience. One was about whether you could organise society without leaders. I said you could. Scruton said that "little points control" would always develop and that seeking power over others was fundamental to human nature. Another question was about how in a society of free access people would be able to distinguish between "need and greed". Scruton thought they would not. I argued that people were quite capable of responsibly determining their own needs of they didn't live in conditions of rationing and scarcity as they did in capitalism where they were rationed by their wage packet.

At the end we had five minutes each to sum up. Again I tried to say too much and had to rush. My thrust was that at one time in history people (Greeks and Romans) had used intellectually sophisticated arguments to assert that chattel slavery was inevitable and eternal. Aristotle had said that it was a fundamental feature of civilised life. Scruton, I went on, was using the same kind of arguments to defend a different kind of slavery, but slavery nonetheless—wage slavery. Historically wage slavery was no more inevitable or eternal than chattel slavery had been and when the majority of people wanted to get rid of it and bring in a non-slave society in which no man or woman was subordinate to any other, they would do so. Then we would have socialism.

Scruton would up by stating that he was the only one who'd taken account of history, for the whole of history gave evidence that people sought power over others. For socialism to be set up fundamental human desires would have to be abolished. He said that the discussion had, however, been a "most instructive" one. He denied there was any proof that the pursuit of profit on the part of the few was a limitation on the freedom of the many and concluded by stating that he had not, that evening, heard a formula for what everyone, himself included, would like to achieve but what was unachievable—freedom from necessity.

He told me he'd enjoyed the occasion and asked if I could try to get the library of the institution I'd told him I was a teacher in to subscribe to his Salisbury Review. "A serious journal:, he called it. I promised I'd have a go.

As we left the hall he was approached by an excited gentleman who'd been taking photographs during the meeting and who, as I read later in a cutting sent me from a Guildford paper, was a local Greek-Cypriot businessman complaining about a pro-Turkish article on Cyprus which Scruton had written in the Times.

Over in the pub Scruton eased himself away from Mr Demosthenous only to be taxed by a very hairy teenaged socialist on the subject of pre-capitalist societies—tribal ones—which had operated with far greater freedom than capitalism on a basis of common ownership and democratic participation. Didn't this show that human beings weren't naturally power-seeking or grasping? Scruton must have been a bit nonplussed by an articulate argument from what he thought was an unlikely source because he didn't put up much resistance.

As I left I asked him if he thought private property itself was fundamental to human nature. He said he did and that he'd argued the point "very rudely" in one of his books. I felt like saying that the point got argued very frequently and very rudely too by visitors at my local branch meetings but that, despite his learning and sophistication, his arguments for it had been no more convincing than theirs. All the evidence, I said to myself as he vanished out the door, was in the other direction. But then he had taken a Socialist Standard away with him and if he read it maybe he'd find some of that evidence there. Come to think of it, maybe I should have asked him to subscribe to the Standard? After all my library's now agreed to take the Salisbury Review.
Howard Moss

The debate itself took place on Friday, 9 December 1983 at the Woodbridge Road Sports Ground Pavilion, Guildford.

The title of the debate was 'Is Socialism compatible with freedom?'

Howard generally seems to bring out the 'niceness' in unlikely people.I always saw Scruton as an intolerant boor.