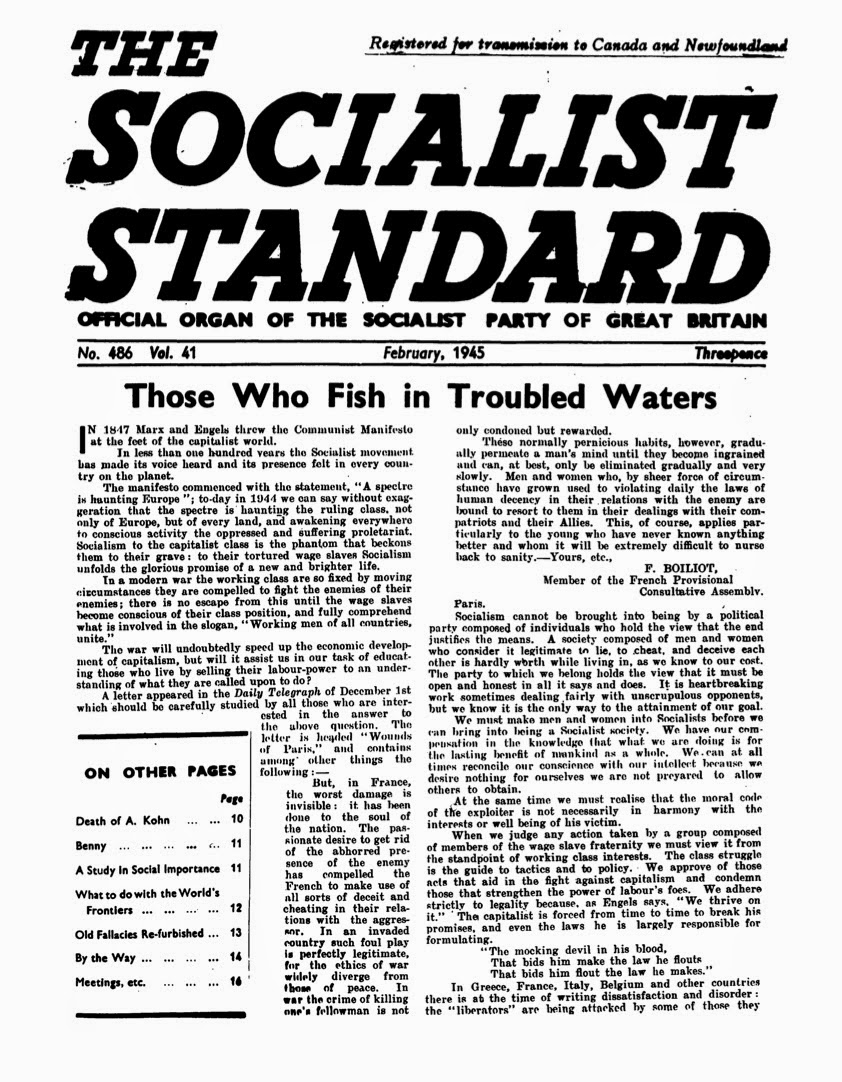 From the February 1945 issue of the Socialist Standard

A few weeks ago my closest friends were killed in an air raid. They were a small working-class family—father, mother and two young children. Benny and I knew each other very well. He was not a Socialist but nevertheless always professed working-class sympathies. His life was comparable to millions—poverty while in work and long periods of unemployment. An emigrant from Poland, he began work in this country at the age of thirteen. From that time onwards until his violent and tragic end all he experienced was that well-known Churchillian curse, "Blood, sweat, toil and tears."

Benny was a machinist is an East End factory. Year in, year out, he had struggled to provide is family with the best that his meagre wages could buy. A small rented suburban house and a secondary education for the children. But Benny's most remarkable characteristic was his contentment. Try as I might, I could never stir in him any real revolutionary class-conscious feeling. He escaped from reality within the narrow confines of his family, and therein created a world of fantastic make-believe and pseudo-happiness. A pitiful happiness, for the family's poverty and degradation were only too obvious.

Unfortunately. there are many others like Benny—workers who are prepared to allow the present system of society to continue. To these people we put forward the only solution that we claim can end all this needless suffering and misery.

If capitalism continues, poverty, unemployment, insecurity and war will always be with us. Poverty for the masses, riches for the few. Wages for the workers barely sufficient to keep them alive; profits for the capitalists sufficient to keep them in indolent luxury. And unemployment. Has Beveridge shown us the way out? Why, of course not. Given conditions of production and distribution for sale and profit-making, when commodities find no market factories close down and widespread unemployment occurs. Great Britain since 1920 has had an unemployed army ranging from one to three millions, and the U.S.A.—that country of "high" wages and refrigerators—had figures reaching heights of 11 million. Poverty together with unemployment and perpetual economic insecurity are in themselves sufficient condemnation of capitalism. Besides all this, however, the various national sections of the world capitalist class periodically fall out with each other. No longer can their disagreements over private property issues be settled around conference tables; wars are declared and millions are massacred and maimed.

For all this there is but one answer—Socialism. To the millions of "Bennys" who have so far paid little heed to our message we say awaken from your political slumbers. We endeavour to tear down the film which hangs heavy over your eyes. As yet you have always succumbed to the subtle propaganda of your masters but this state of affairs is drawing to a close. The post-war period looms threateningly. Your destiny and the destiny of future generations lies within your hands. Leaders can do nothing for you. All political parties in this country, apart from the S.P.G.B., stand for the reform and consequent retention of capitalism. We, alone, advocate the total overthrown and abolition of capitalism, and the establishment of Socialism.

I write this article heavy with regret for the loss of a dear friend, but confident and hopeful for the future—for the future holds great promise for mankind. Socialism and happiness are within our grasp: only understanding and the necessary political action are needed to make it a reality.