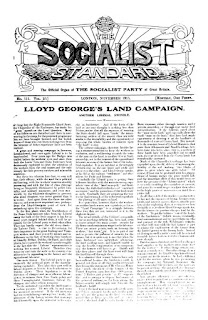 Editorial from the November 1913 issue of the Socialist Standard

The Lancaster Pit of the Universal Colliery at Senghenydd was again the scene of a fearful explosion, in which 435 of our fellow workers have perished—sacrificed to the greed of that butcher, King Capital. Although on the occasion of the last disaster (1901) in this mine, the coroner’s jury found that the mine was not sufficiently watered, and Professor Galloway, the Government Inspector of Mines, reported that the necessary precautions in watering the roadways had not been attended to, yet the mine owners allow conditions to prevail that send to their doom 435 miners.

Every time coal dust has caused a mine explosion the warning has been given, but it has passed unheeded. When the toilers were entombed at West Stanley in 1909, the Government investigators reported that “unless the grave danger which exists at many collieries owing to the pressure of coal dust is attacked with much greater earnestness than it has been in the past, disasters of a similar nature will occur from time to time." At Whitehaven in 1910 the inspector proclaimed that "the precautions against the accumulation of coal dust were of a haphazard and unsystematic character," and he also stated that “the ventilation of the working face was inadequate for the needs of the mine having in view the gassy nature of the coal." Following upon this the same inspector made this sinister statement to a Press Agency representative:


“ Practically every risk which exists could be eliminated if cost were no object."

These burning words could be backed up by plenty of other quotations from leading agents of capitalism, but let these suffice. The plain fact emerges from every disaster that the toilers’ lives are sacrificed to dividends and interest. Mines Acts are passed, as that of 1911, with special provisions excluding mines which do not "pay’’ well from adopting precautions. As for the others, the owners please themselves. The Mines Inspectors are so few, and their powers so meagre, that the regulations are broken with impunity. Last August a fire occurred at the Carron Co’s, pit at Cadder, and 22 miners who went down to earn their pittance on Sunday perished. And notwithstanding that the Mines Act of two years previous enjoins every mine to have complete rescue apparatus, the rescue men had to travel forty miles to obtain life saving apparatus.

“Speed and Grab" is the password of the profit mongers. Exhaust the coal seams throw up clouds of dangerous dust, but do not bother about safety for mere workers.

Lord Merthyr, managing director of the Senghenydd mine, is a Tory; his cousin, D. A. Thomas, is a Liberal. They shed crocodilian tears when the miners are murdered below, hut when these men want a little more grub they threaten them with a “lock out." When they stay away because the mine looks dangerous they are fined for being absent without leave. When they strike they are given over to starvation and bullets. When they ask for a dollar a day for five days a week, then Press and profit-mongering mine-owners denounce them as selfish strikers. Pah ! the hypocrisy of their slobbering over the children they have orphaned and the wives they have widowed offends the nostrils!

What shall we say, too, of the cant of the snuffling priest. He is always on hand to preach submission to the victims. The Bishop of Llandaff told the women of Senghenydd the usual tale of the “hand of God." The Archbishop of York said at a meeting of the Church of England Men’s Society held at Cardiff :


“We are surrounded by the spirit of bravery and hope with which our brothers here are facing the trial and anxiety which God it asking them to pass through. . . .  I am sure you all feel there would have been something lacking in our spirit as Christian men assembled as a great brotherhood pledged to Christian sympathy if we had not placed the burdens of those our brothers and sisters before the Throne of Christ, commit ting them to the care of the Heavenly Father.”

Thus the Church does its work as murderers’ agent. "Place the burdens before the throne of Christ" ! How much better than placing them on the employers responsible!

Why are not the shareholders brought to trial as was the engine-driver of Aiegill Junction? He was charged with the manslaughter of Sir Arthur Percy Douglas—the mine owners merely killed workingmen. Bourgeois juries acquitted Caudle at the inquest on the working-class victims of the railway accident, but when it came to one born in the purple Driver Caudle gets two months.

The ridiculous lightness of such a sentence, however, for the crime of manslaughter, shows how clearly it was recognised that little of the fault lay with Caudle. A defective engine and small coal had been supplied and were the primary cause of the disaster. Yet the profit-grabbing directors and shareholders of the Midland Railway Co. are allowed to go scot free. These wealthy exploiters of half-starved railway servants are the real culprits, but, of course, they plead ignorance of the working of the line when blame is to be apportioned, notwithstanding that they claim tremendous directing ability when it comes to sharing out the plunder.
Posted by Imposs1904 at 6:03 AM