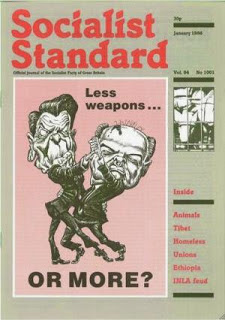 From the January 1988 issue of the Socialist Standard

While all the razzmatazz, media hype and self-congratulation has been going on in Washington over the INF agreement, a group of NATO nuclear experts have quietly been engaged in discussion over what are euphemistically called ‘'compensatory measures", or in other words, how to fill the gaps left in the western alliance's war machine by the scrapping of missiles under the terms of the INF treaty. The end result could be more, not less, nuclear weapons in Europe.

You could be forgiven for thinking that the INF agreement marked the dawning of a new age heralded by those two saintly peace-makers Reagan and Gorbachev. In fact the INF treaty is a paltry little agreement that at best will get rid of just 3-4 per cent of nuclear weapons on both sides — there will still be plenty more left to blow up the world several times over. Under the terms of the agreement (if it is ratified by a two-thirds majority in the US Senate — Gorbachev can be confident that the Supreme Soviet will obediently endorse their leader s decision) all Cruise and Pershing II missiles already deployed in Western Europe will be destroyed over a three year period. In return Russia will scrap its SS20s, and shorter range SSI2 and SS23 missiles.

But meanwhile, in NATO, strategists are proposing ways of plugging the gaps left behind — like through the deployment of new air- and sea-launched nuclear weapons or moving more US F-l 11 nuclear bombers to bases in Europe so that they are within easy reach of Russian targets. No doubt Russia's military supremos have been engaged in similar planning of "compensatory measures”.

The determinedly optimistic will probably argue that the INF treaty is only the beginning and that it is likely to be followed by the cutting of strategic weapons by 50 per cent within a year or so as a result of START (Strategic Arms Reduction Talks). Fifty per cent certainly sounds like a big cut until you realise that what they are arguing about is an agreement which aims to achieve a common ceiling of six thousand warheads on both sides. It's hard to feel optimistic about that.

Once all the euphoria has evaporated and the media circus has left Washington for the next location on the non-stop leadership-promotion tour, perhaps people will reflect in the cold light of reason, on what has really been achieved by this treaty.

Firstly, it is an agreement whose main purpose must be seen as economic and political rather than the removal of the threat of nuclear annihilation. Gorbachev needed an arms reduction treaty — and the worldwide publicity which accompanied it — in order to bolster his political position and enable him to pursue his programme of domestic economic and political reform from a position of greater strength within the Russian political elite. Reagan badly wanted to be remembered for something other than the shabby deals connected with the Irangate scandal, the enormous budget deficit, his penchant for jelly beans and his inability to string together a coherent sentence unless he had a script in front of him.

Secondly, the treaty does not address the problem of how to dispose of nuclear weapons. Even when the plutonium has been removed from the warheads, the remaining rockets — packed full of highly flammable fuel — will be extremely dangerous to destroy. Nuclear missiles are designed to explode causing the maximum possible damage, not to be dismantled with minimum damage.

Finally, and most seriously, the INF agreement does not even begin to tackle the real problem of nuclear weapons. Not only does it propose to scrap only a tiny proportion of the total nuclear stockpile but also it raises no questions at all about why we have nuclear weapons, or indeed any other kinds of weapons. In fact to the extent that arms treaties of this kind reinforce the position of political leaders (and hence the capitalist class which they represent) and present them as basically reasonable, benevolent people, then they could be said to also reinforce the capitalist system and all its attendant problems — including war.