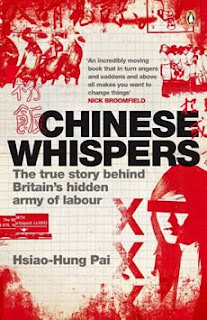 Book Review from the August 2010 issue of the Socialist Standard

Chinese Whispers. Hsiao-Hung Pai (Penguin Books)
The changes in Chinese capitalism over the last few decades – privatisation, sackings, factories producing for multinational companies – have led to vast numbers of workers moving to the biggest cities in search of work. Many have also felt they had little choice but to try their luck abroad, if only to earn enough to pay for their children’s education. It is these, usually undocumented and ‘illegal’ migrant workers, numbering perhaps 200,000 in the UK, whose story is told in this revealing book.

Most Chinese workers who move to Britain in search of work borrow money to pay the ‘snakeheads’ who smuggle them here. They also have to pay the gang-masters who find jobs for them (and if they are sacked or leave their jobs, they have to pay again to get another). Pai, a journalist who sometimes went underground as a pretend undocumented worker herself to gather information, shows the kind of work they do and the conditions in which they labour.

From assembling Samsung microwaves in Hartlepool to chopping up pork in Suffolk, from picking vegetables in Selsey to washing up in London’s Chinatown, they do the hardest and dirtiest jobs, with little if any training and no health and safety instruction. Typical wages may be £3.20 an hour, well below the legal minimum wage and further below what British workers doing similar work might earn. The hours are long, there are no paid holidays, and there may be compulsory and unpaid overtime when more output is wanted. Pai even manages to speak to some of the three thousand or so undocumented Chinese women who work in the sex trade.

Being undocumented, the workers have no access to health care or the few protections that capitalist laws provide. Nor can they join a trade union. Most speak little English, which further limits their links to anyone who might help them and opens them to even worse exploitation. They are, however, sometimes able to strike up a camaraderie with other migrant workers, such as Ukrainians.

The British government has occasionally cracked down on illegal workers and those who employ them, but this just makes the workers’ position even more precarious. Policies on asylum seekers and those denied refugee status contribute to the existence of an army of people desperate for any job they can get. British capitalism makes the most of their cheap and flexible labour power, but even that may not be enough to keep the factories here. In 2005 some of the Hartlepool factories relocated to Slovakia for access to even cheaper labour power. And no wonder many Chinese employers in Britain support the Chinese government’s policies which give rise to all these migrant workers.

Pai’s book gives a vivid picture of those at the very bottom of capitalism’s heap, and also fills in some of the background in terms of the global nature of production and of the sourcing of labour power under capitalism.
Paul Bennett
Posted by Imposs1904 at 5:14 PM