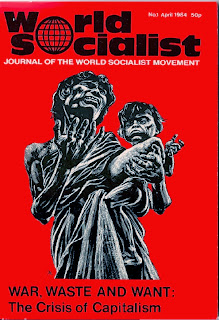 Editorial from the April 1984 issue of the World Socialist

Across the entire face of the planet useful labour is held back and subject to domination by world capital. World Socialism will establish the freedom in which it can concentrate its energies solely on human needs.

This will be world co-operation to produce more food; to provide housing, sanitation and clean water for the hundreds of millions who endure sub-standard conditions or live in squalor; to provide health services; to construct a safe world energy system; to stop the despoliation of the planet and the pollution of its atmosphere, its seas, forests and lands; to provide for education and enjoyment; to provide for movement and communication. These are the urgent needs for which world socialism will release the immense resources of potentially useful labour, now held in check by the insanities of the profit system.

Useful labour must realise its own needs. These are the needs of co-operation, of mutual interest, of free development, and above all, the need of free access to all the productive means and resources which are its own universal inheritance.

Everything that is best in this inheritance has one source and one source alone -  that of useful work in all its variety. The work of arts and crafts; the work of science and applied technique; the work of tool making and providing machinery; the work of building and farming; the work of transport, education and health services. All these are skills which have been accumulated throughout history from the first flint implement to the space vehicles of today. This represents the accumulated power of useful labour.

Wherever we look throughout the world we can see the evidence of the best things that useful labour can do - once it can flourish in freedom for human needs.

But also now wherever we look, we see useful labour confined and in shackles. It suffers the waste of unemployment; the demoralisation of poverty and constricted development. Its use is distorted in a world armaments industry through which has been built the means of human destruction. The work of providing for needs is ignored, whilst hundreds of millions are under arms. Labour is forced into the divisive moulds of nationalism and competition.

Wherever we look labour is isolated from the means of production and resources by the laws of exploitative class relations. In its individual exchange with capital, wage labour works as a meaningless economic function, obeying the blind laws of commodity production and the economic tyranny of capital accumulation. Labour is the source of profit and not the activity of providing for needs.

Yet only useful labour, in co-operation, has the power to build a better world and to become the means of mutual care; to work in harmony with itself, with others and with nature. It is a power which is in common between all humanity, rising above the differences of race, culture and language, and the widely differing routes by which humanity has emerged from history. From this diversity, useful labour can enrich all human experience - in co-operation. This universal, self-realisation of useful labour can only be achieved by the human relations of common ownership, democratic control and production for use. In every world problem, in every common hope which remains unrealised and in every common experience of failure and disillusion, is the voice of useful labour demanding its free expression. World socialism provides its clear and conscious political direction.

World Socialism will operate with one simple and ordinary human ability which is universal - the ability of every individual to co-operate with others in a world wide community of interests.

This World Socialist journal is committed to the work of bringing this to fruition. The co-operation which exists now between the Companion Parties for World Socialism will take this work forward and this has only one direction -  the principled growth of the World Socialist Movement.