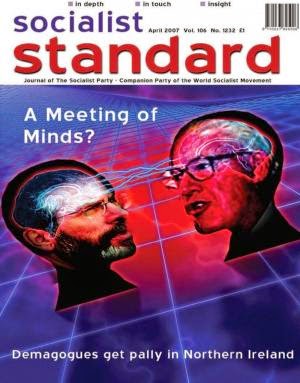 From the April 2007 issue of the Socialist Standard

Introductory note. As a researcher, I am swamped by a constant stream of Working Papers, Discussion Papers, Position Papers, Occasional Papers and Miscellaneous Papers that all sorts of schools, networks, institutes, foundations, and centres are kind enough to send my way. Most of them go straight on a pile for later transfer to the green recycle bin, but now and then one catches my eye. I was so impressed by the sheer brilliance of this “Thought Paper” by a junior economist at the Centre for Research, Analysis and Policy (CRAP) that I decided to share it with readers of the Socialist Standard. The author wishes to remain anonymous. — Stefan

Optimal efficiency in the use of any resource requires the functioning of an effective market in that resource. Everyone (that is, everyone who matters) accepts this thesis in principle, but proposals to put the principle into practice still run up against irrational fears and prejudices, hidebound attitudes, and vague moral reservations. This applies especially to the still controversial issue of establishing and regulating a market in air.
That no doubt explains why the published literature on air marketisation and privatisation is so scanty, although these topics have been the object of lively discussion among economic policy specialists, and not only at our centre.  And yet, as people are beginning to realise, the air in the Earth’s atmosphere is a limited resource like any other.


If its use is to be rationalised, the consumption of air must be subject to the discipline of the market. As in the case of wood, water or any other resource, free access to air is a flagrant invitation to profligacy and waste. Studies by physiologists in several countries have revealed that surprisingly large proportions of individuals breathe more deeply and/or at more frequent intervals than strictly necessary for adequate body maintenance.
Many of these irresponsible “free riders” encourage their children to follow their own bad example. Indeed, there are even misguided physicians who in deference to the latest health fad promote “deep breathing” practices among their patients. In the past, the purely technical difficulties of controlling air consumption confined discussion of air markets to the realm of futurological speculation.
Thus, the writer Herbert George Wells, in a story that has for some reason been considered “dystopian,” imagined a future in which the majority of the population live and work underground and, in addition to rent, pay private companies to ventilate their quarters. If they fall into arrears with their air payments the air supply is turned off until the next tenant resumes payment.
Recent developments in pharmacology give reason to hope that in the not too distant future it will be feasible to control air consumption above ground. In the most plausible scenario, a legally mandated annual dose of a paralytic agent makes respiration impossible without subsequent weekly injection of an antidote, the market in which serves as a proxy air market. Of course, the first dose of the paralytic agent has to be combined with the first dose of the antidote; it is only from the second dose that the consumer starts to pay for the antidote – that is, for air access.
The right to sell the antidote to different sections of the population could be sold at auction to the highest bidders.  Those who feel that such an arrangement is morally repugnant usually justify their stance in terms of the naive idea that a person’s access to a vital necessity like air should not depend on how much money he or she has. Presumably it is acceptable to regulate access to luxuries by means of money, but not access to the necessities of life. But this idea makes no sense in the real world. Consider what absurd conclusions would follow if we applied it consistently.
It would mean that there should be free access to food just because we have moral qualms about people starving to death. It would mean that there should be free access to housing, heating, and warm clothing just because we shrink from the sight of people freezing to death in the winter cold. It would mean that there should be free access to medical care just because we feel people should not die for lack of the money to get treated. After all, besides breathing, people need to eat and drink, keep warm, and so on. To be sure, asphyxiation is a quicker way to die than most. But that makes it more humane, not less.
What has this sort of fuzzy thinking got to do with economic rationality?
Stefan
Posted by Imposs1904 at 6:42 AM