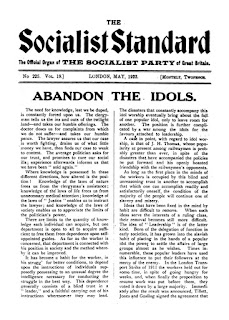 From the May 1923 issue of the Socialist Standard

The need for knowledge, lest we be duped, is constantly forced upon us. The clergyman tells us the ins and outs of the twilight land—and takes our humble offerings. The doctor doses us for complaints for which we do not suffer—and takes our humble pence. The lawyer assures us that our case is worth fighting, drains us of what little money we have, then finds our case too weak to contest. The average politician asks for our trust, and promises to cure our social ills; experience afterwards informs us that we have been "sold again."

There are limits to the quantity of knowledge each individual can acquire, but one department is open to all to acquire sufficient to free them from dependence upon self-appointed guides. As far as the worker is concerned, that department is connected with his position in society and the method whereby it can be improved.

It has become a habit for the worker, in his struggle for better conditions, to depend upon the instructions of individuals supposedly possessing to an unusual degree the intelligence necessary for conducting the struggle in the best way. This dependence generally consists of a blind trust in a "leader," and a faithful carrying out of his instructions wheresoever they may lead. The disasters that constantly accompany this idol worship eventually bring about the fall of one popular idol, only to leave room for another. The position is further complicated by a war among the idols for the favours attached to leadership.

A case in point, with regard to idol worship, is that of J. H. Thomas, whose popularity at present among railwaymen is probably greater than ever, in spite of the disasters that have accompanied the policies he put forward and his openly boasted friendship with the railwaymen's opponents.

As long as the first place in the minds of the workers is occupied by this blind and unreasoning trust in another to accomplish that which one can accomplish readily and satisfactorily oneself, the condition of the majority of the people will continue one of slavery and misery.

Ideas that have been fixed in the mind by habit are difficult to remove. When such ideas serve the interests of a ruling class, their removal becomes still more difficult. The idea of "Leadership" is of the latter kind. Born of the delegation of function in early societies it has grown into the slavish habit of placing the hands of a popular idol the power to settle the affairs of large groups almost as he wishes. Times innumerable, these popular leaders have used this influence to put their followers at the mercy of the enemy. In the London Transport Strike of 1911 the workers held out for some time, in spite of going hungry for weeks, and, when finally the proposition to resume work was put before them, they voted it down by a large majority. Immediately after the result was announced, Tillett, Jones and Gosling signed the agreement that sent the dockers back to work under worse conditions than before the strike.

The leadership idea has cursed the working class movement from the beginning. At an earlier period those supporting the ideas had motives of benevolence, its later supporters have  also benevolent motives—but the benevolence is directed towards themselves. They make stepping stones of their followers to reach comfort and security.

In France, in 1793, Babeuf and his friends sacrificed their fortunes and lives in the attempt to relieve the misery of the mass of oppressed. The method was a sudden attack upon the central seat of power by a courageous and determined minority. Once the centre of power was captured, the conspirators were to issue the regulations that were to guide the people in the formation of the new society. Whether the mass of the people wished it or not, they were to be forced into the new regime. The energetic minority were to hold on to the power they had grasped until such times as the mass of people understood and accepted the new social regulations.

Babeuf's intentions were excellent, but his method was rotten at the root. Instead of first getting the mass of the people to understand and desire the new programme, he proposed to force it upon the, from without. The idea being that the intellectual few knew better what was good for the masses, than the masses did themselves.

Later, Blanqui, also a Frenchman, attempted to carry out Babeuf's idea, modified in the light of experience by altering the form of the secret organisation. Leadership of the many by the enlightened few was still the basis of the movement. In May, 1839, and again in May, 1848, Blanqui led an attaclkon the seat power, but his attempts were crowned with as little success as Babeuf's. He also had good intentions, and paid for them by spending nearly half of his life in prison.

In 1836, an association of working men were formed in London that blossomed out into the first national movement of wage workers. This association took the name of "The London Workingmen's Association" and published an address, the concluding words of which put forward a new outlook for the oppressed, telling them to have done with leaders and trust only in themselves:


"Be assured that the good there is to be must be begun by ourselves."—(Lovett's Autobiography.)

Marx has put the case more definitely, as follows:

In working out his emancipation, the worker must study the conditions that surround and oppress him. He must look to "great principles." and not to "great men" in his struggles. The great man view breeds arguments as to whether this man is a good leader, or that man a bad. The energy that should be given to a study of principles is wasted in endless arguments over idols; and apathy and discouragement often follow the finding of the idol's feet of clay.

He who would enter the land of promise, must first cut his path to the gate. A little study of elementary principles will clear off the brambles that strew the way. Armed with knowledge the worker can direct his organisation himself, and will then abandon the slavish worship of leaders.