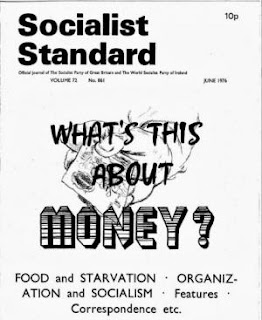 From the June 1976 issue of the Socialist Standard

Part 1 can be read here.

The Clyde Workers' Committee resistance was broken after government intervention in Glasgow. In January 1916, workers at Beardmore's (whose strong representation in the CWC proved to be a maverick one) accepted a dilution scheme contrary to the CWC policy. Next month, the suppression of the CWC's paper, three associated arrests, a dispute at Beardmore's over the working of the dilution agreement, and subsequent strikes on these issues provided the opportunity for the removal of those identified as the trouble-makers. Eventually, seven were jailed and a further ten deported to other parts of Britain.

The Government's attack revealed disunity and a lack of resolve within the CWC and they went down without much of a fight. It was basically a weak organization. Like all so-called "rank-and-file" groups, the most significant thing about them was that they embraced less of the rank and file than the parent unions. Unable to gain any support from them, the place where their particular concerns were most relevant, they were never likely to do anything more substantial. Mindless of this, they challenged a government with dictatorial powers and were slapped down.

Till late 1917 the truncated CWC was subdued, taking no part in the engineers' struggle as it developed in England. In the same year, the political climate on Clydeside began to change. The liberation of the prisoners and deportees, the turmoil in Russia and the growing war-weariness all combined to raise the temperature. The CWC revived and in January 1918 stated opposition to the war. However, no action was ever taken to support this. Possibly, they had realized by this time that David only beats Goliath in fairy tales.

After the war's end, unemployment began to grow. The idea had also been developing that the time was ripe for cutting the working week. Inevitably, the two issues became linked with the aim of cutting hours to reduce unemployment. Early in 1919, local union officials and shop stewards met with Glasgow Trades Council and eventually resolved to issue a call for a general strike in support of a 40-hour week.

The strike began on January 27th with mixed success. There was a wide response from shipbuilding and engineering but power and transport, two prime targets, continued. After a few days, 100,000 were claimed to be out. Contact with the authorities began on the 29th when a deputation asked the Lord Provost of Glasgow to put the strikers' demands to the government. This he did, but not in the way that the strikers intended. He wired to London representing the strike as an unconstitutional threat and indicated that the strikers' request was an ultimatum. This was partly true, as the mass picket had been introduced to "induce" recalcitrant workers to come out. The government decided to hold fire in the absence of a more obvious challenge but to make the preparations to enable quick military intervention if necessary. Mindful of similar discontent in Belfast and recent events in Russia and Germany, they were prepared to take no chances.

Oblivious to these developments, the strikers returned on the 31st to hear the reply to the Provost's telegram. While a deputation went to see the Provost, trouble broke out among the thousands outside in George Square. A tramcar trying to pass through the throng was stopped and police drew batons to try to clear a way. Violence then spread throughout the Square and the Riot Act was read. Although there were allegations of plots by both sides no proof of any premeditation was produced.

By morning, troops were on guard in the city and six tanks were being held in reserve. Attempts were now made to spread the strike but the most hopeful effort was averted by the government. Power workers in London threatened to black-out the city but after the wartime Defence of the Realm Act was invoked to make the strike illegal, the Electrical Trades Union backed down. Within another week the strike was over.

The strike failed to go outside the West of Scotland and had failed to become general within that area. The need for mass pickets was proof of the lack of support from many workers, and any "induced" to strike were hardly likely to be reliable.

The end of the strike was claimed to be a tactical retreat to organize a better effort, but the movement died. The most significant political outcome of the period was the election to parliament in 1923 of 10 ILP members from the 15 Glasgow constituencies. The Labour Party has dominated politics in the area ever since. Others joined the new Communist Party, and that has also remained relatively strong in the area. From then on, energies were concentrated on the mainstream of British politics, and the idea of Clydeside as a maverick area within the nation was largely dead. Against this trend was MacLean. He formed the nationalist Scottish Workers' Republican Party which withered away after his death in 1923.

The most notable thing about the period was the parochialism of the activities. They were always centred on Clydeside and mainly in the engineering industry. However, they faced a capitalist class organized nationally and proved no match. This lesson seems to have been realized by the end of the 40-hours strike.

As a possible revolutionary movement, the Clydesiders were non-starters. Apart from the occasional pronouncement, nearly all their actions were in support of purely industrial aims. The exception was the rent strike. As the government had no real opposition to their aims, however, the achievement was not great.

The events of early 1916 and early 1919 show that the power of the state must be treated very seriously. Capitalist democracy, paltry though it may be by Socialist standards, is well enough organized to defeat any minority. Just as important, on the same basis it is possible for a revolutionary majority to gain control of political power. However, this is not enough. Capitalism is organized on a world scale operating through national units and, thus, any serious challenge to this order of society must follow the same pattern. This is an enormous task but it is the only one that fits the measure of the Socialist aim.