Editorial: The Great Sham Fight at the Polls (1924) 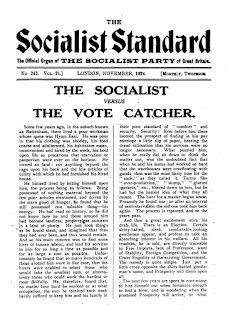 Editorial from the November 1924 issue of the Socialist Standard

The Election came too suddenly for us to be able to deal with it before the event—which saved us at least from the temptation to offer you the name and score of the winning team. Our attitude will be well known to our readers. We have but one policy, the same as at between elections. We want Socialism, and we say now, as always, that whatever the workers may get by supporting either of the three great parties, they will not get Socialism.

Workers who are so hypnotised by the promise of reforms, those patches on a rotten social structure, that they neglect to observe the rottenness of the capitalist system itself, will naturally support that party whose programme promises them most, providing that they retain enough infantile trustfulness to believe anything from the mouth of a politician. Thus the bulk of the working class voted Conservative or Liberal, and the remainder of those who voted at all gave their votes to the Labour Party. Suicidal though this is, and regrettable from the Socialist standpoint, there is no doubt that the workers who voted thus believed they were acting intelligently. Conservative policy, dictated though it is primarily in the interests of the Conservative wing of the capitalist class, may incidentally bring temporary and apparent benefit to the workers employed in certain industries. Similarly, the policy of what was the Liberal Party, and the policy of the inheritors of the Liberal tradition, the Labour Party, might bring some seeming advantage to some other sections of the workers. In a moment of panic or under the pressure of discontent any one of these parties, all of them now claiming to be “Reform" parties, might introduce measures bringing fleeting relief to the great mass of the working class, and the latter, accustomed to taking short views, vote for the reforms and forget to ask themselves why it is that this constant reform legislation is necessary, and why, in spite of it, the condition of their class grows steadily worse. We do not defend capitalism like the Liberals and Conservatives, but neither do we defend it apologetically like the. Labour Party. Mr. Wheatley, in introducing his Housing Bill, said that it was an attempt to patch up the capitalist system, in the interests of humanity. We do not believe that humanity can be served by patching up the capitalist system, but only by destroying it. If we thought otherwise we would presumably support one or other of the parties which has confidence in its ability to patch up capitalism; but we should cease to be Socialists if we shared Mr. Wheatley’s belief. He ignores the fact that every reform of this kind increases the responsibility and power of the capitalist State, and increases the stability of the capitalist system.

When the workers want Socialism they will not be deceived into believing that support of t;he non-socialist programmes of the Liberal, Conservative, and Labour Parties will give them it.

The Election, in spite of its heat, was a sham fight, not in the sense that any of the party machines was worked at less than full pressure but in the sense that there was no issue in dispute worth fighting about. The Conservatives said it was a fight against Socialism, but they left Socialism alone and concentrated their energies on mud-slinging and appeals to the most brutal and ignorant prejudices. The Liberals had no time to spare from their task of preventing a stampede among their own sheep. They raised the dear-bread cry to hedge the right wing off from the Conservatives, and the Bolshevik bogey to hold in the Liberal left wing. The result was heavy losses in both directions. The Labour Party was only too willing to take up every trivial-challenge its opponents chose to throw down, and avoid not only the question of Socialism, but also what it says are its own principles. Only one still small voice was heard to mention the Capital Levy, Nationalisation had to take a subordinate place to the Russian Treaty, nothing was mentioned this time about independence for Ireland or the native races in the Empire, and it was rare indeed to see an election address or hear a speech containing any definite attack on the fundamentals of the capitalist system. Socialism itself, even if the word may have crept in now and again to satisfy the left-wingers, was not treated as practical politics.

How often are we told by “Socialists" who join the Labour Party of the magnificent opportunities they will have of carrying on Socialist propaganda. Usually their "Socialist propaganda” consists in helping some place-hunter into the House of Commons by defending a sickening mixture of the platitudes of degenerate Christianity and the exploded nostrums of the trashy Liberal economists of the late nineteenth century, which is all the typical Labour election address contains.

As for the result, the Labour Party, while they may reasonably regret the shocking blunder Macdonald made in going to the country on an issue so difficult to explain in the bustle of an election as the Russian Treaty, they nevertheless feel pleased with the number of votes cast for their candidates. To have increased their poll by over a million was, in the circumstances, a so-called "victory" for them.

Mr. H. N. Brailsford, in the "New Leader” (October 31st), has something to say about MacDonald’s blunder and his leadership of the Labour Party which suggests that there may be considerable discontent behind the scenes :—


“We have undoubtedly paid heavily for the unlucky handling of the Campbell affair and the Zinovieff letter. We contrived to give the impression of a lack of candour. Our explanations came tardily, and when they came, they failed to remove the suspicion that something discreditable was being concealed. As we look back on these crowded weeks, the doubt increases whether we did wisely to refuse an inquiry into the Campbell affair. There was no truth whatever in the suspicion which our opponents fostered, that 'extremists' were dominating the Government. The plain fact is that it would be difficult to name a single Member in our Party who would have approved a prosecution in the Campbell case. The Party was equally solid in its support of the Russian Treaty, and all of us would have regarded the failure to complete it as a disaster. When the heat and weariness of this struggle have passed we shall have to review at leisure the record of these nine months, but our tests will not be those which our opponents use. The shortcomings which have injured us were, to our thinking, rather temperamental than intellectual. In ability and in devoted work our Front Bench did not fall short. Its leadership, however, too often lacked frankness in the House. It was too ready to treat proper questions as insults. It thought too often in terms of conspiracies and plots, and gave undue weight to electioneering tactics. It somehow failed, when the contest came, under the stress of excitement and overwork, to raise the issue to the level of reasoned debate."

The huge Conservative majority may well prove an embarrassing asset unless chance is very kind to them. They have first to fight out among their own sectional interests what their fiscal policy is to be, and; as recent experience should have taught them, unless unemployment decreases considerably a majority in the House is not for long a guarantee of support in the constituencies. For reasons beyond the control of the Government, unemployment may of course take a downward trend, but the Conservatives have no positive remedy, any more than has the Labour Party.

The Communists made themselves ridiculous, as usual. Whether the Zinovieff letter is forged or not, it accurately reproduces the ideas of these grown-up children who play at soldiers and gunpowder plots; Communist support of the Labour Party cost it many thousands of votes. This is how the Communists carry out their anti-Socialist policy of helping Labour into power. Is it possible to find anywhere else men so pitifully ignorant of the power of the State and of the ingenuity of the ruling class who control it; or so childishly innocent of the elements of political action? Such people would, if they had any influence on the workers, be a positive danger to any who followed them in their suicidal appeal to violence. Communists at Deptford were delirious with joy because Bowerman, supporter of a Bill to make Communist propaganda illegal, was returned again. If they received orders from Moscow to do so, they would hang themselves.

Conservative victories, Liberal victories, and Labour “ triumphs ” we have had before. The capitalist system continues to crush the working class, and will do so until the workers realise the fraud of these parties and their programmes. Only when the workers become Socialists will the great sham fights at the polls give place to a real political struggle between capital and the working class.
Posted by Imposs1904 at 2:02 PM