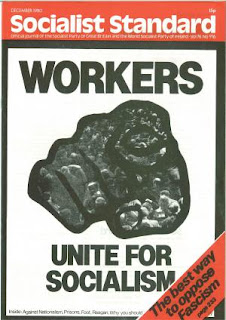 From the December 1980 issue of the Socialist Standard

The reformist roundabout never stops. Once you climb upon it the circular road ahead is endless. Bombs to be banned, “houses for all” to be built, “jobs for all” to be provided, pollution of the atmosphere to be legislated against, begging bowls for the starving millions to be handed around, battered wives to protect, police powers to be kept in check. The reformist’s work is never done, not for lack of energetic effort, but because the problems to be abolished bit by bit invariably multiply faster than reform measures. Like a nightmare in which the more you run the longer is the road ahead, the never-ceasing production of social distress caused by the present system leaves the reformist running faster and faster in order to stay in the same place. Read any copy of Socialist Worker or Newsline and you will be out of breath by the third page—Fight this, Smash that, Campaign against this, Demand that—the energy of the exercise is staggering. But add together the results of all this fighting and smashing and campaigning and demanding and the effect is rather less breathtaking: fifty policemen's hats knocked off, a number of jolly marches to Hyde Park and back and a few new recruits for the Labour Party. Is this really the way to change society?

In popular parlance, the reformer is the advocate of change, while the conservative stands for stability. In fact, most conservatives advocate some degree of change, as long as it does not alter the basis of the social system, and all reformists are conservative insofar as they only seek change within the structure of the present social system. Socialists do not oppose reformists because the latter want change, but because the change which we advocate is of a broader character.

Socialists oppose capitalism as a network of social relationships based upon the private ownership and control of the means of producing and distributing wealth. The system is one in which there are two classes: those who own the means of life, but have no need to work (the capitalist class) and those who, because they do not own the machinery of production, must sell themselves for a wage or salary in order to live (the working class). Capitalism is a system of exploitation whereby the profits accumulated by the capitalists are obtained by paying workers less than the value of the wealth they produce. This legalised robbery means that the wealth producers do not have access to what they produce, but must buy it from the exploiting class by spending their wages and salaries. As production under capitalism is for profit before need, if the capitalists cannot sell their commodities on the market people who need them must go without.

If people are homeless while houses stand empty, there is not in fact a housing shortage, but a shortage of money on the part of the workers needing accommodation; when millions starve, it is true that malnutrition could be eradicated tomorrow but for the need for food companies to make a profit; as the weapons of murder are set in readiness for the next war, this is not because people are inherently aggressive, but because under capitalism the protection of property is more important than life; whenever self-created tragedy afflicts the human race, the socialist is not to be found weeping in mournful despair, but ever more determined to convince the working class that the reason for the bloody mess is capitalism.

Such analysis is not to be found in the heads of the furniture re-arrangers of the capitalist system. Hopping from one problem to another, the reformist attends to the symptoms while leaving the cause intact. Cause and effect are terms of little meaning to the reformist. Not understanding what the system is all about, the reformist cannot understand just what sort of perverse game he is indulging in: pleading with the robber class to throw back to the robbed a few crumbs of wealth. Asking for a “fairer” slice of the cake, while leaving the bakery in the hands of those who do no baking is a game for mugs.

“Better something now than everything tomorrow”, says the defensive reformist. But can capitalism fulfil even the limited and second-rate “short-term” objectives that reformists have? The record of more than a century of reformism provides the answer. They were promising full or near-full employment in 1945, but we have not got it. Charities have been passing round collection boxes for a century, yet a main British charity, Oxfam, has recently had to admit that there are more starving people today than when they started. Decent homes for all workers has been on the agenda of every political party for a hundred years, yet in 1979 the Department of the Environment stated that there were 53,000 homeless families in Britain. (This is widely believed to be an underestimation.) Millions of decent people have chanted their wish to “Ban the Bomb”, but bombs are still very much with us. The so-called Welfare State, not a great provision at the best of times, is today being whittled away by cuts in state expenditure. True enough, children no longer go down the mines and the work- houses are less obvious institutions than they once were, but after a century of social reform, during a period when the capacity for producing wealth has increased considerably, is the present standard of life the best that we could have achieved?

The provision of legislative reforms is both limited and fragile. Furthermore, they serve an important political service for the capitalists who provide them. Reforms can secure social stability: when the rule of capital appears to be under threat the ruling class is “only too glad to buy a prolonged armistice at the price of ever-repeated concessions to the working people” (Engels). In short, reforms are often a means of buying off the working class. That is why, as working class consciousness grows, so the offer of reforms by the capitalist class will increase. When the working class, armed with the knowledge that all social wealth can belong to the community, are offered reforms they will tell the capitalists that half-loaves are not enough.

But what of the so-called revolutionary reformers, like the Socialist Workers’ Party, who claim that they only advocate reforms to demonstrate to the working class that capitalism cannot provide them? Like a muddle-headed driving instructor who teaches someone to drive by showing them how to crash into a brick wall and then says, “Now that I’ve shown you how not to do it, you will have no trouble knowing the correct way”. Demand the Right to Work, the SWP proclaims, in order to prove that there is no such right under capitalism. Then, according to the crackpot theorists, the unemployed will realise what is wrong with capitalism and start to organise for revolution. In fact, workers who support these daft tactical reform campaigns usually believe that they will get what they are demanding. The result is that capitalism is either reformed to their satisfaction (for the time being) and they become acquiescent wage slaves or else the reform campaign fails, they become disillusioned with politics and apathetic or, in some cases, turn to more sinister reform gangs like the National Front.

Socialists are not against reforms which improve the material existence of all or some workers. Indeed, socialists are neither for nor against particular reforms, but are uncompromisingly opposed to reformism. If, for instance, a reform could be passed making it easier for socialists to have access to the media we would be pleased; in that sense we would approve of the reform. What we would not do is join a campaign with non-socialists to ensure the legislation of such a reform, for by doing so we would be forced to support whichever capitalist party agreed to grant the reform to us. Reformism is a capitulation to the power of the capitalist class.

Those who want to re-arrange the furniture of capitalism tell us that it is utopian to seek change which is not slow and gradual. We reply that we are in a hurry; we are not content with the way in which capitalism has been reformed and there are no reforms which could be offered that will distract us from the clear road ahead; we have a world to win and those who will not join us stand in our way.
Steve Coleman