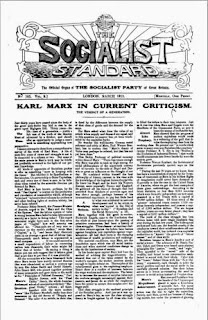 Much Ado About Nothing

An article appeared in the January issue of our paper under the title "The Pace That Kills" in which the writer. F.C.W., says: "If a cyclist is scared off " (the road) "he becomes s passenger the more for the bus, and another source of profit for the trust." etc.

This, to me, conveys an idea which is damaging to the revolutionary position of the S.P.G.B. The idea impressed on my mind by reading the passage is that it is as consumers (buyers) we are robbed.

I deny that a passenger is “another source of profit for the trust", who happens for the reasons given to become a passenger the more on the bus owned by the trust.

Profit is a part of surplus-value, and this is taken from the workers during the time in the process of production. Hence the source of profit is surplus-value. This point is made clear by Karl Marx in "Value, Price, and Profit." In that work (c. XI, p. 37) will be found the following: —

Those who have read this brilliant work will now understand the importance of the distinction.

On the same page you will find : —

The distinction is clear.

F.C.W. is wrong in what he impresses on the mind of at least one of his readers.

I would suggest the substitution of the word "means" is place of "source," and the word '‘realising" before "profit." The passage would then read: "If a cyclist is scared off be becomes a passenger the more for the bus. and another means of realising profit for the trust." etc.
Yours fraternally.
Comrade F. Coates.

Reply:
Obviously rent, interest, and profit are all derived in the last resort from surplus labour. and as this great truth is not disputed in the article in question. Comrade Coates's anxiety for the safety of the cause is a little premature. All is not yet lost.

The sentence referred to does not indicate that we are robbed as consumers, nor does it say that passengers are the source of the trust's profits. The comrade has simply misunderstood. Two quotations from "Value, Price, and Profit" are quite gratuitous. Marx is emphasising in an elementary way to au audience of working men that labour, though not the sole source of wealth, is yet the sole source of exchange value, in opposition to Weston's argument that value was the sum of wages, plus profit, plus rent. Nicer distinctions be perforce left for “Capital,” contenting himself with making broad statements of fact, such as "Profit is made by selling a commodity at its value;" to which, perhaps, the captious critic would object that "profit is made in the factory."

Comrade Coates has not grasped the fact that surplus labour, surplus value, and profit are not, strictly speaking merely different names for the same thing. They are distinct stages of a process. Without the change of form, realisation, or sale of the repository of surplus value, the last stage, “profit." cannot come into being. As Marx says ("Capital,” Vol. I., p. 79):-

Surplus labour (and the same applies to all labour) does not become surplus value unless it is embodied in a use-value to someone else, and there can be no profit unless this use-value is sold. In this sense, therefore, and in this limited sense only, the act of realising surplus value is a source of profit.

Taking the bus trust as a normal capitalist concern, it is clear that the number of fares is of vital importance to it, for on this depends its profit Yet from Comrade Coates’s bald statements one might infer that the trust would be just as prosperous if its buses ran empty! Obviously the advent of the passenger is essential to the making of profit. Each additional fare enables more surplus labour to be realised and more profit obtained, and may in consequence be not inaccurately described as a farther source of profit to the trust.

The sentence disputed would not be improved by the wording proposed by Comrade Coates, which only says the same thing more awkwardly. It was, moreover, quite beside the purpose of the article to give a scientific dissertation on value. Brevity was necessary in order to confine attention to the main issue.

Notwithstanding this, it is difficult for the poor scribe to believe that the phrase could be misunderstood except by by means of a deliberate mental squint.

An Explanation
W. Austin (Small Heath) asks us to explain the meaning of the passage in the “Communist Manifesto": -


Under capitalism the past dominates the present because the mesas of production, developed from the past, and possessed to-day by the few, dominate the lives of the producers, and forms the general structure sod relations of society.

L. Marks, Manchester.
Your claim that "a Socialist party cannot afford to wait until the conditions are ripe for a sound economic organisation” needs explaining before we can assent, otherwise you state the position pretty correctly. There is room in our party for all who hold with our principles and policy, and we know of nothing that is keeping you out and preventing you from putting into practice the theories you proclaim so well in your letter.

Comrade F. Coates was a member of the Manchester Branch of the SPGB. The 'W' who wrote in reply to his reply is, I presume, F. C. Watts himself, the author of the original article that caused his ire.

My guess is that L. Marks was Lazarus Marks who was a member of the Manchester Branch of the SPGB for a period in 1914, and who also rejoined the SPGB later on and was a member from 1923-1926. He reigned in 1914, and was expelled from the SPGB in '26 but I have no further details.