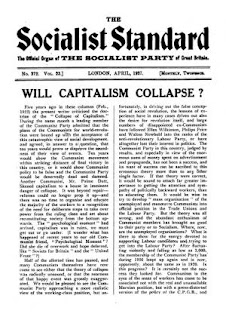 From the April 1927 issue of the Socialist Standard

It is over a hundred years since Robert Owen gave to the world at large his “New View of Society," now republished by Messrs. J. M. Dent & Sons, Ltd., in Everyman’s Library (price 2s., cloth). Modern industry based upon machinery was still in its infancy, though it was developing rapidly and revolutionising the mode of life of millions of workers.

The French Revolution with its flowery promises had resulted in bitter disillusion for the workers and given rise to the Napoleonic wars. An unprecedented trade boom gave way to an equally remarkable slump. In the place of overwork stepped unemployment, and destitution appeared widespread just at the moment when the production of wealth had reached its zenith. The rumblings of discontent everywhere were shaking the confidence of members of the ruling class in the permanence of the social structure.

As a member of that class Owen came forward with his plan. For something like thirty years he had been gaining experience as manager and ultimately owner of various industrial undertakings, and he had learnt to appreciate the important part played by the conditions of employment in moulding the character and habits of the workers, and he had the intelligence to apply his knowledge with practical advantage to himself.

He discovered that his employees produced more when their hours of labour were shortened and the sanitary and educational conditions of their existence were improved, and he jumped to the conclusion that what was possible in his case was possible in all cases; and that all that was required in order to bring heaven to earth was for him to make known his success.

To his fellow-manufacturers he addressed an appeal to follow his example and urge the Legislature to limit hours of labour for adults as well as children, and to prohibit the employment of the latter under a certain age. To various prominent and influential members of the aristocracy he proposed that the Government should establish villages of industry run on similar lines to his own in order to absorb the unemployed and relieve the pressure on the Poor Rate. To the workers he preached patience and goodwill towards their exploiters in the hope that the latter would mend their ways.

For Owen, the struggle between the workers and their exploiters was an evil to be got rid of by preaching, while the effort on the part of the former to obtain political power was regarded as vain and futile by this forerunner of reformers. Professing to regard all men as the creatures of their circumstances, he yet failed to appreciate his own short-sightedness, itself the product of his class outlook.

Nevertheless, his work possessed at the time considerable critical value. He exposed the anarchy and waste of competition, the mainspring of capitalism. He showed the futility of expecting to eliminate crime while leaving the causes thereof untouched. He flattened out the pretensions of myriad religious sects to be the harbingers of brotherly love. In a word he exploded the comfortable notions of social progress which the Manchester School of bourgeois thought endeavoured to spread.

Industrial progress and the political development accompanying it thrust Owen’s views into the background so far as the advanced workers were concerned. The legalisation of the Trades Unions, the Ten Hours Act and the winning of the franchise, all these were the result of struggle and not of mere persuasion.

They cleared the field for independent action by the workers, and on that basis Marx developed his theory of the class struggle as the means of ushering in the new society.

The followers of Owen degenerated either into sectarian cranks pursuing semi-monkish experiments in the form of isolated colonies, or mere humbugs trying to beat the tradesmen at their own game of profit-making by means of “divi-” stores. While Marx applied the materialist method to enable the workers to discover the means of their own emancipation, the Holyoakes and others tried to erect Secularism to the dignity of a new religion.

Owen’s ideas have been assimilated in part by many of the members of the capitalist class. The Leverhulmes, the Cadbury’s, and the Ford’s have all applied his teachings in so far as they paid to do so, and have posed as men of originality. All the politicians who uphold capitalism pay lip-service to his notion of goodwill and harmony between the classes. The "social problem” is far from solution however as ever it was. It will remain so until the workers, driven to learn by experience, accept the discoveries of Marx as their guide and forsake the leadership of parasitic, self-appointed "friends."

In opposition to the capture of political power and the common ownership of the means of life, all that these friends can offer — from the Labour  "Left" to the Tory "Right" — is Utopia